It's remarkably easy for a novice to identify some of the more distinctive mushrooms online, or at least make an educated guess. Please don't eat these photos, or the mushrooms in them, based on these likely identities. No expertise is claimed here, or knowledge of their edibility, just a pleasure at so easily finding lookalikes on the web.

Yesterday, we were out at Herrontown Woods, searching for the old telephone poles that lead from Herrontown Road to the Veblen Cottage, when I spotted this fungus on a tree. Its form looked like stalactites, so I later googled "stalactite mushroom" and up popped a lookalike: the lion's mane, or Hericium erinaceus for long. The mushroom is white at first, then turns yellow with time. 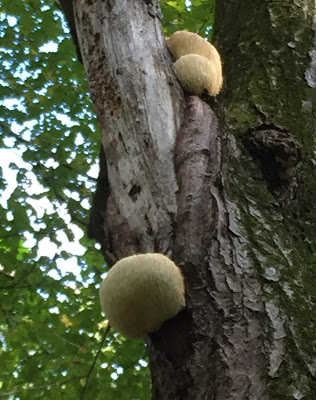 It's also called the pom pom mushroom, here growing on a red maple that's still alive but has a bit of serendipitous rot here and there. Mushrooms teach us that a little rot can be a good thing, especially out in the woods. 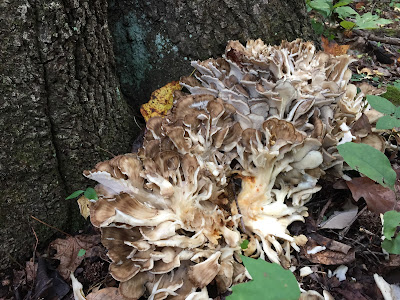 Another mushroom encountered in Herrontown Woods looks a lot like Hen of the Woods (Grifola frondosa) which interestingly is native to both Asia and North America. Again, this identification is going on superficial appearance only, so please don't eat this image. You'd almost certainly eat your cell phone or computer screen in the process, and they can contain components that are indigestible or even toxic, and often carry spam messages that have been known to spread viruses. 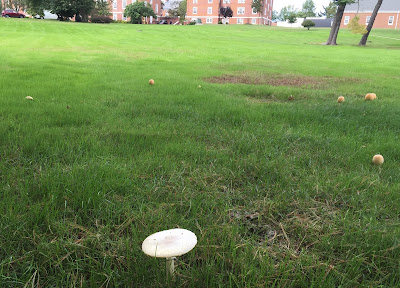 More fairy rings have been popping up around town, whether in Herrontown Woods or in the expansive lawn in front of Westminster Choir College. If you look closely, you can see the other mushrooms that roughly describe a circle in the photo. 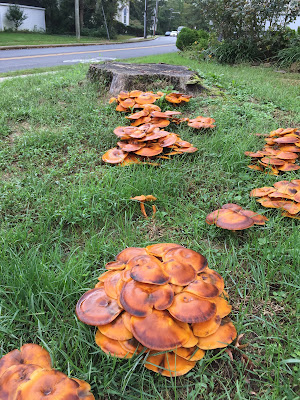 This mushroom at Linden and Hamilton brought to mind the word "chanterelle", which it is not, but googling what it is not led to what it is. A search for "chanterelle", then a click on "images", brought forth a photo that looked similar, and a post that distinguished chanterelles from Jack-O-Lantern mushrooms.

Unlike chanterelles, which grow in the forest, Jack-O-Lantern mushrooms (Omphalotus illudens) grow in bunches in suburban lawns, often near stumps.

The ease with which these likely mycological identities were found is a reminder that we live in a golden age of information. A few words rattling around the brain (chanterelle, stalactite, hen of the woods) was all that was needed to conjure a potpourri of possible lookalikes.

That fallacies prosper in the political world when truth is a click or two away reminds me of what happened to steam locomotives, or what will happen to internal combustion engines when electric cars take over. Technologies reach their zenith just before their demise, and perhaps the same will hold for information. By the time the world in its wondrous beauty and complexity has been fully captured on the internet in easily searchable form, humanity will have been drawn away by fabulous fabrications that cater to resentment rather than wonder. May these words prove more edible than the photos.
Posted by Steve Hiltner at Monday, October 22, 2018

Email ThisBlogThis!Share to TwitterShare to FacebookShare to Pinterest
Labels: mushrooms