Naturalists, at least this one, spend a lot of time on town streets. Other than trees, the streetscapes are dominated by lawns and yardwaste--not the most thrilling experience of nature. Every now and then, though, there's an exception, a point of interest worth taking note of. On busy streets particularly, people intent on reaching their destination tend to keep their gaze straight ahead, so that the houses and yards most frequently passed in a town are also the least noticed. 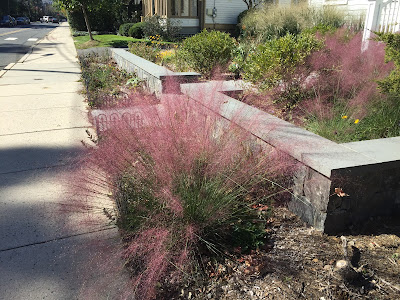 Only a brilliant cloud of pink made me notice this garden on Wiggins, currently showing off a native called purple muhly grass. If you can't say Muhlenbergia capillaris, just substitute the word "gorgeous." I've only seen it growing wild in a small roadside prairie remnant in North Carolina, and in a cultivated form in a couple gardens in Princeton. This particular garden also has rattlesnake master, another native species rarely encountered in the wild. 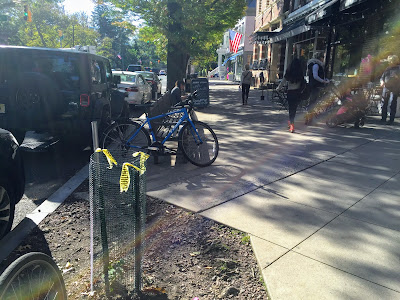 Meanwhile, along Nassau Street, what's unusual about this scene? Check out the little tree corral there on the left, made visible by strips of yellow warning tape. It looks like it's missing its tree, 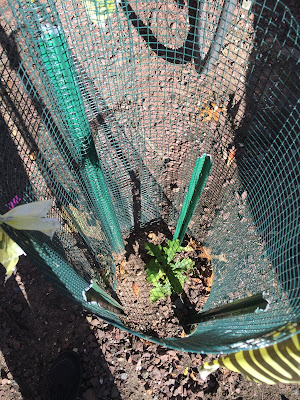 but there at the bottom of the corral is a tiny red oak. Some business owner, perhaps, has enough imagination, optimism, and patience to have planted this tiny tree. Princeton is losing lots of street trees to disease, insects, and storms, and doesn't have the budget to adequately replant with large saplings for hundreds of dollars a pop. When I was on the shade tree commission, I suggested doing much as this person has done--plant many, many small trees, 2-4 feet tall, protect them well, and let time be on our side. The idea remains just that, but it's good to know there's at least one kindred spirit out there. 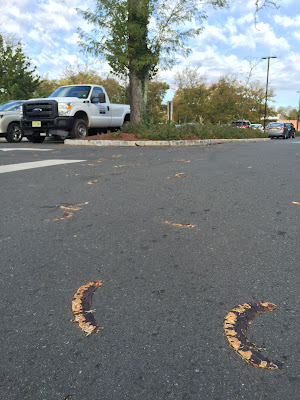 Here's some nature that's not only beside the road but on the pavement as well, the pods of a lonely honey locust tree standing near the back entrance to McCaffery's at the Princeton Shopping Center. 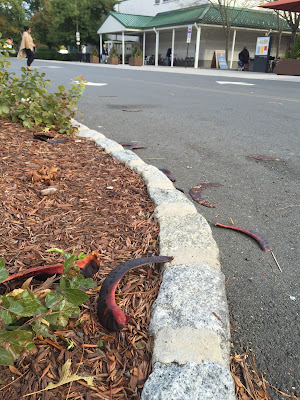 A 2015 post describes its edibility, flavor, and missing herbivores. The giant herbivores that used to eat the honey locust and its fruit went extinct 15,000 years ago. Now it's a real nowhere tree, making all its nowhere seeds for nobody. 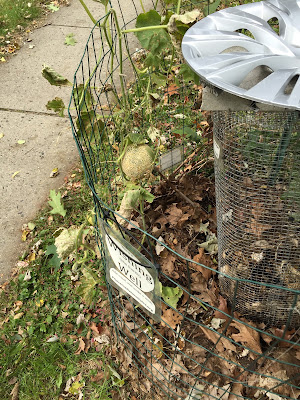 Down Harrison Street from the Shopping Center is another sort of fenced enclosure, our roadside leaf corral, the Wishing (the earth) Well. Late in the summer, a melon plant appeared. 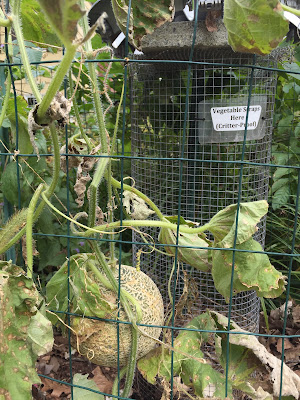 The melon plant sprouted from the central cylinder of food scraps, which gets surrounded and hidden by leaves later in the fall, and was able to produce a small melon during those days when summer spends its last heat. 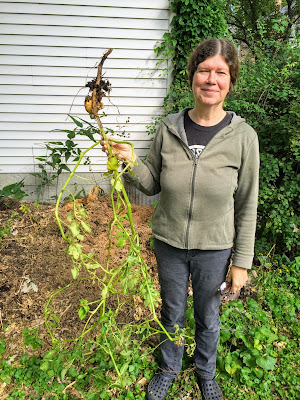 In a more premeditated fashion, my sister-in-law in Wisconsin grows potatoes in her leaf pile. The garden writer Ruth Stout would grow her potatoes by laying them on the ground and throwing some straw on top. The potato plants would push up through the straw, and potatoes would form under the hay but on top of the ground. Easier to harvest, easier to clean. Same concept as growing them in a leaf pile. 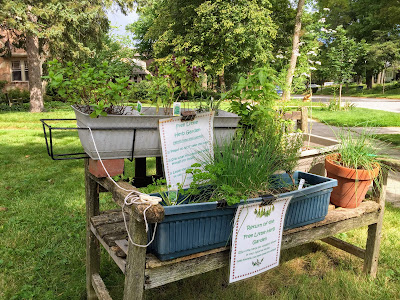 Edna's neighbor's contribution to roadside nature in their neighborhood is some potted herbs from which any neighbor is welcome and encouraged to take a few leaves to cook with. 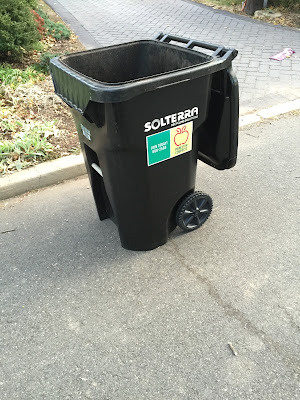 Finally, an observation about a lowly rollcart used for holding foodwaste. Most are 32 gallon sized, but this one is 64 gallons, big enough to hold the equivalent of two yardwaste bags' worth of leaves or other organic matter, along with the foodwaste. Princeton's foodwaste program is struggling. Last I heard, the foodwaste is going to a waste-to-energy plant a half hour away, which might actually be better carbon-wise than driving it twice as far into Pennsylvania to get composted.

I celebrate the larger rollcart size primarily because it means Princeton could eventually adopt an efficient system that has worked well out on the west coast and in treeful Ann Arbor, MI, where there's a requirement that all yardwaste be containerized, and food scraps can be tossed in with the yardwaste. A particularly welcome result is clean streets that send less nutrient pollution into local streams. 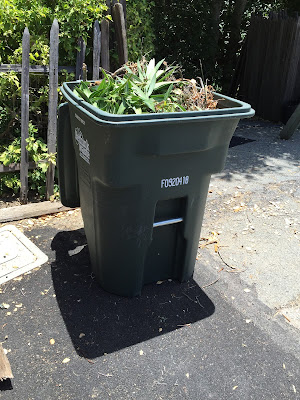 Even a 96 gallon sized rollcart, like this one in California, is easily maneuvered, and emptied into trucks using a small "tipper hook" installed on the back of a regular garbage truck. The composting program in Ann Arbor, on land just outside of town rather than an hour's drive away, requires no special, expensive machinery. The windrows contain mostly yardwaste, and whatever food scraps people throw in benefit the composting process. I'd guess that contamination with non-compostables, which has imperiled the current program, is much less of a problem when foodwaste is incorporated into the overall yardwaste composting program.

Our relationship to nature is defined not only by what we grow or protect, but how we deal with the "spent nature" in yard and kitchen. This, too, is part of the daily experience of roadside nature.