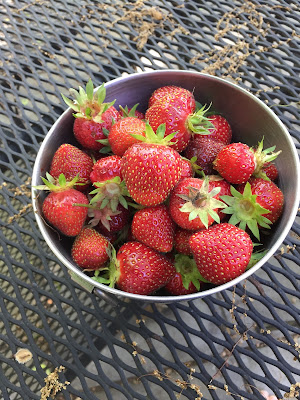 Watch spring unfold for enough years and it can start to get predictable in a Groundhog Day kind of way. One group of bloomers segues into the next, year after year. There's a theater piece I wrote called Spring Training, that imagines how Spring's trainer, charged with getting Spring in shape for the annual run-through, would react if Spring decided to go rogue and change the order of flowers on a whim. That hasn't happened, far as I know, despite all the changes underfoot and overhead due to our chemical tampering with the atmosphere. Still, this spring has offered a collection of surprises.

A big surprise came a couple mornings ago, when I dared to walk out into the garden and search for strawberries. Disappointment had been a predictable result up to now, as catbirds, slugs, and who knows what else would claim our berry harvests before we could. True, our past care of the garden had not been marked by a consistent diligence and vigilance, and maybe that was the difference this year. We've paid the garden more attention, and in return it provided a yield of incredibly unblemished berries. 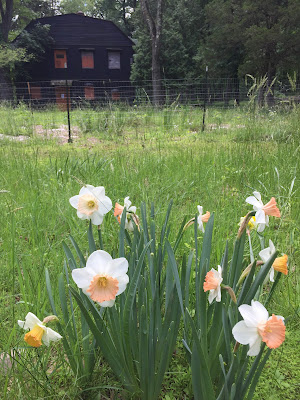 Daffodils in late May? That's what you get, it turns out, when you plant them in March, rather than the previous fall. These were planted by volunteers who came to a daffodil planting party at Veblen House. 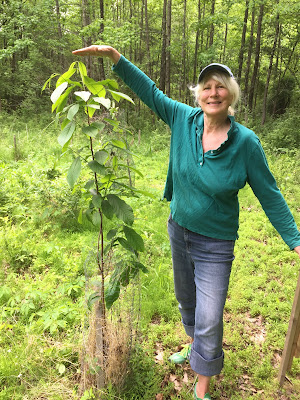 Also at Veblen House, the pawpaws are leapin'. There's a saying about transplanted shrubs and trees. "The first year they sleep, the second year they creep, and on the third year they leap!" It's been four years since we planted these. Close enough. Periodic attention has had to be paid to protect them until they are beyond the reach of the deer. 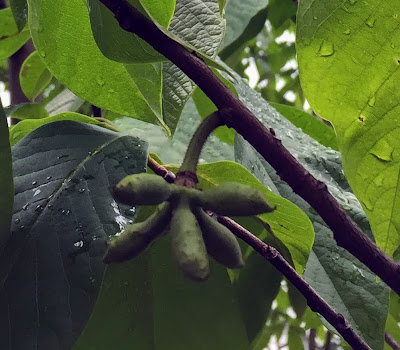 My friend Steven who has pawpaws in the backyard had to hand pollinate them to get fruit. This wasn't incredibly surprising, though it's always a surprise when something that's supposed to work actually works.

Steven reminded me that years ago I had given him a "live stake" of silky dogwood. It probably looked a lot like this one--a two foot long late-winter cutting that, in this case, was left to sit in a bucket of water until it sprouted leaves on top and roots on the bottom. 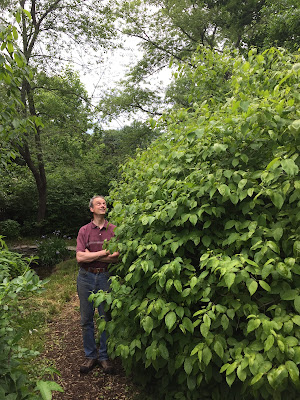 He had planted it in his "lower 40", a wet area that receives runoff from the yard and some sun from an opening in the canopy. Since then, it has quietly grown into a shrub more than ten feet high. 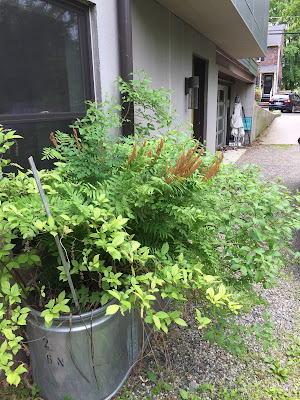 Another surprise came when Architect Kirsten Thoft reminded me recently that I'd given her some plants for her "stormwater planter", which utilizes and filters runoff from the roof before releasing the rest into the yard. This is a good option for downspouts that empty onto pavement. Plants I noticed: Virginia sweetspire, tall meadowrue, and royal fern.

If there's a theme here, it's that plants and nature in general demonstrate an impressive growth force when given a chance, and a little dose of tending through the years. That's a realization that never loses its sense of pleasant surprise.
Posted by Steve Hiltner at Saturday, June 01, 2019