Enter New York's Central Park across from the Natural History Museum, and you're likely to come upon one of the giant rocks where kids climb. For a parent whose kids have grown, it's a chance to gaze at the changing skyline in the distance (taller, skinnier), and remember back some distance to that parental mixture of worry and delight as a young daughter explored the sometimes precipitous contours of this massive boulder.

For many people, this spot may not offer much beyond rock, water, and skyline softened by an undifferentiated sea of green foliage. 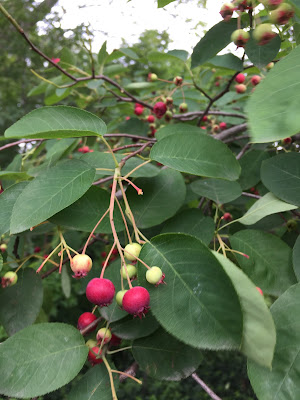 But for a botanist and wild gardener, this place evokes so much more. That tree on the left in the first photo is a serviceberry (Amelanchier) that in early June is loaded with ripe berries. I gorged while the incurious streamed by on their way to rocks and water. 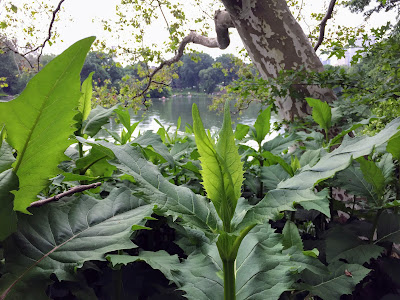 A massing of cup-plants under a sycamore tree brought back memories of where I first encountered this towering native wildflower, growing untended next to a dumpster in the parking lot of Mark Twain's historic house in Hartford, CT. 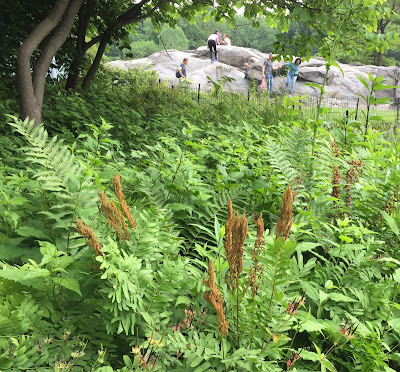 The sight of royal fern (Osmunda regalis) brings back memories of all the other places I've seen it, whether planted in my yard or growing wild, back in the depths of Herrontown Woods. 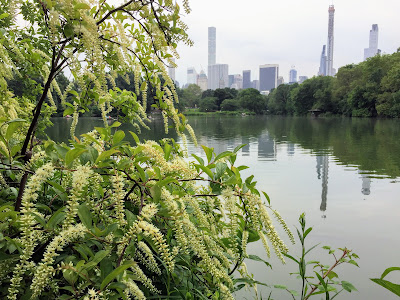 This Virginia sweetspire looks very much like the one in my front yard, but with a grander backdrop, and brings back memories of the one time I saw it growing in the wild, along the banks of the Eno River in North Carolina. 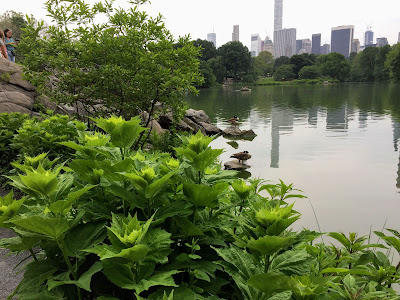 These rosemallow hibiscus are offering little in mid-June to catch the untrained eye, but recognizing them without flowers links Central Park to my backyard, the edges of the Millstone River headwaters, and everywhere else I've seen this native hibiscus growing. Familiarity with the plant in all stages also makes it possible to "see" the big, broad flowers that will come in July. For a seasoned wild gardener, that is, a gardener who has been through all the seasons with this or that plant, the present is enriched by the past and future it holds within it. 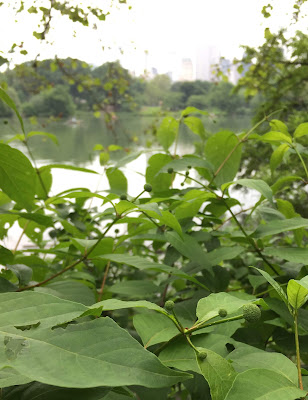 The community of plants near the climbing rock--native shrubs and wildflowers that thrive with wet ground below and sun above--is what we've propagated into many areas of Princeton, but Central Park adds the framing of the skyline, rock outcroppings and water. To see it there, or in the parks of Chicago during a recent visit, is to bear witness to a recurring community gathering, each member with its quirks. Buttonbush, with its buttons of forming seeds, is in this particular photo. Many others are not shown, like Joe Pye Weed, lizard's tail, cutleaf coneflower, Helenium, New England aster, cardinal flower--their coevolution in the wild here emulated in a park. 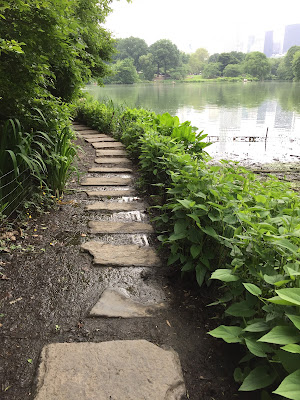 So many steps it takes, to raise kids or raise an enriching awareness of plants, which in turn brings meaning and memory to every new step taken.
Posted by Steve Hiltner at Wednesday, June 12, 2019