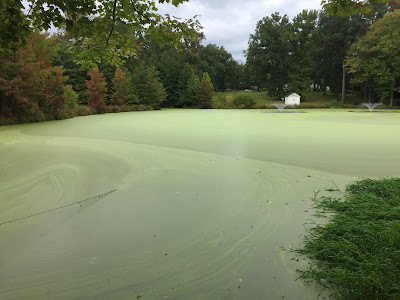 For most, perhaps all of the summer, open water was only a memory at Smoyer Park's pond. In its place was a layer of green, molded into static swirls that blotted out what in previous years had been a play of light and wind on water. It's like closing the curtain on a stage.
Though I'd seen a pond in North Carolina similarly coated shore to shore, the disappearance of open water in Smoyer Park came as a surprise. What was it, and had it happened before? One regular walker in the park said it had never been as bad as this year. 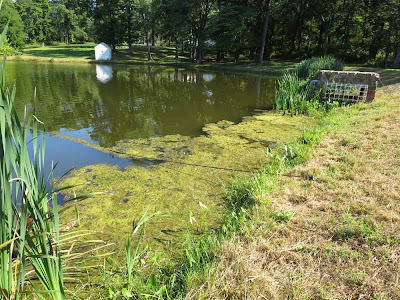 An older photo from early September, 2014 shows just a little algae or algae-like growth accumulated along the shore, offering more evidence that this year is different.
I mention "algae-like" because not all accumulations of green growth on ponds are algae, as became more evident as we took a closer look at this year's green growth in Smoyer Park's pond.
The closer look was prompted by a link in a Sustainable Princeton email to an NJ Spotlight article about the increasing number of lakes in NJ beset by harmful algal growth, and the likely link to nutrient pollution flowing into waterways from fertilized lawns, farm fields, and pavement. We tend to think of nutrients like nitrogen and phosphorus as beneficial, but excess nutrients in nature tend to cause harmful chain reactions. In a waterway, they can lead to blooms of algae, which then die and decompose, sucking up the dissolved oxygen needed by fish. Some species of algae produce toxins, such as those alleged to have recently killed hundreds of elephants in Africa.
I contacted Jenny Ludmer, who lives near the park and takes a great interest in local nature, and suggested the possibility that a new algae might be causing the excessive coverage in Smoyer Park. As an example of recent changes, a strange algae has shown up in early spring in one of my backyard miniponds the past couple years. I also looked up the once pristine lake of my childhood, Lake Geneva in Wisconsin, and found that algal growth stimulated by rising temperatures and nutrient pollution, plus an invasive plant named starry stonewort, are now interfering with boating and swimming. 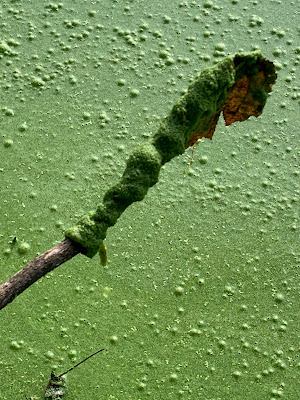 Jenny and I discussed whether the green was duckweed or algae. She took another look and sent this photo that made it look like the duckweed had been coated in a layer of green goo. Concerned about the potential for toxins, she also sent some photos to the state DEP, which promptly dispatched someone to take a sample. It sure looked like algae, and yet the state report showed "HAB not present," meaning no harmful algal bloom. They found a little Cylindrospermopsis--a cylinder-shaped blue-green algae--and not much more. 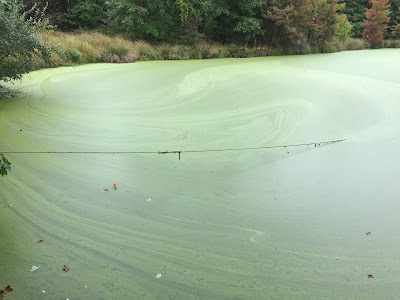 Finally, I returned to the coated waters of Smoyer Park for a closer look. Was it algae that was cheating us of any reflection of the sweetgums now turning glorious colors on the far shore? 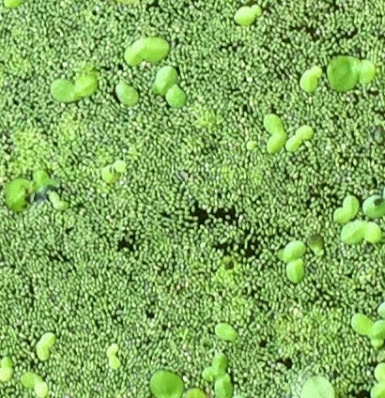 A closeup of the surface showed scattered duckweed, but something else as well, much smaller and much more numerous. 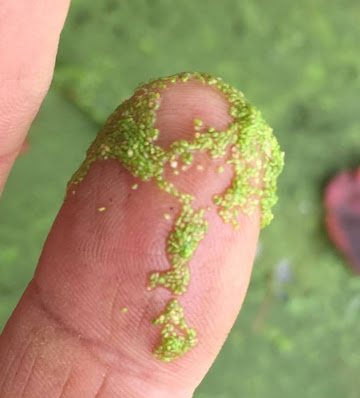 The small green particles were gritty to the touch. The internet, as usual, offered an instant answer: watermeal, in the genus Wolffia, which includes what wikipedia calls "the smallest flowers on earth."
It's a native species, but can be expansionist in its behavior. Warming waters and runoff from chemical fertilizer used on lawns in the small watershed that feeds the pond are some potential causes of this year's "over the top" growth.
Smoyer Park's is not the only pond having this problem. Brooklyn Botanic Garden included a small pond in a stream corridor they carved into their grounds a few years ago. Their pond's first two years of existence were marred by rampant algal growth, but this year, its watermeal that has moved in. They are hoping that over time, nature's checks and balances will take hold. But the example of an older pond like Smoyer Park's suggests that time is no longer the mender it once was.
For anyone wanting to report potentially toxic algae outbreaks, there's a form at this link.
Posted by Steve Hiltner at Wednesday, September 30, 2020