Even now, as the flowers begin to fade,

autumn clematis makes this lamppost look like it's wearing a voluminous fur coat. 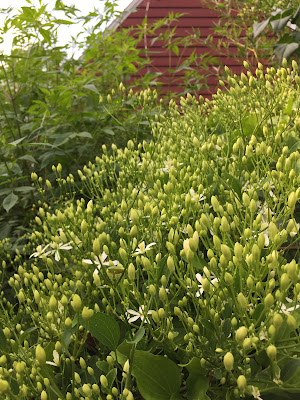 It's been a good year for autumn clematis, whose big floristic show revved up in these parts nearly a month ago, caught in a photo where a cascade of flowers-to-be was piggybacking on a neighbor's fenceline.
There is great appeal in the blooms, and yet this vine should come with a warning sign. 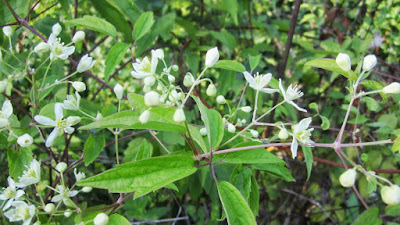 In my mind, though not in the garden, I pair the nonnative Autumn clematis (Clematis terniflora) with the native virgin's bower (Clematis virginiana), which also has white flowers and a sprawling habit. An easy way to tell the two apart is the leaves, which are toothed in the native, rounded in the nonnative. The native's flowering comes earlier in the summer and lasts a week rather than a month.
Together they tell a familiar story, in which the native has become comparatively rare. Years back, I took this rarity to mean that the native was less aggressive, but in fact the native when planted in the garden has proven just as hard to control as the introduced species. While sending up vines that grow over other plants, as you'd expect of a vine, both also spread underground, popping up in all sorts of places where you had other plans. 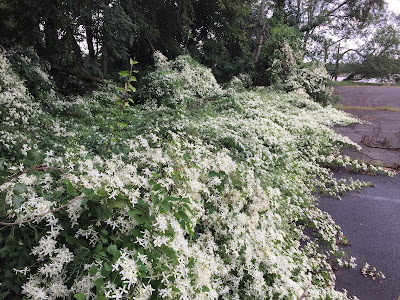 Why is it the nonnative that can be seen covering a whole side of an abandoned parking lot in Montgomery north of Princeton? 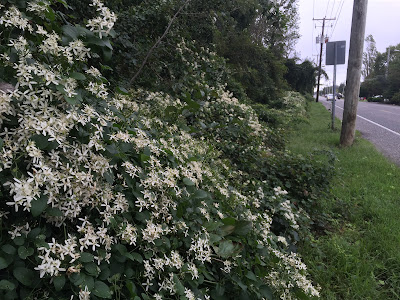 or lining the road to Cape May Point State Park?
There are books that claim that nonnative invasive species are somehow superior to the natives, and that we should embrace these "winners" rather than counter them. Hopefully that dubious premise has faded into obscurity, unlike so many other dubious premises that now strut their stuff on the national stage.
More likely, the autumn clematis's capacity to grow unhindered is due to its unpalatability to deer and other wildlife. That would explain why the native virgin's bower is rare in local nature preserves while it runs rampant in my garden in town, where deer seldom venture. 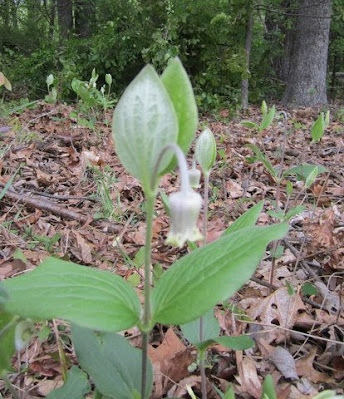 Periodically, I head down the great eastern piedmont from Princeton to North Carolina, where I've been involved with saving some rare habitat known as piedmont prairie. This small remnant on the outskirts of Durham, NC contains a clematis that will seem odd to anyone accustomed to clematis being a vine. This one, called curly top, Clematis ochroleuca, grows a foot or two tall in full sun and special soils formed from the underlying diabase rock. Princeton has lots of diabase rock along its ridge, which also hosts rare species, though not the same ones as in NC. 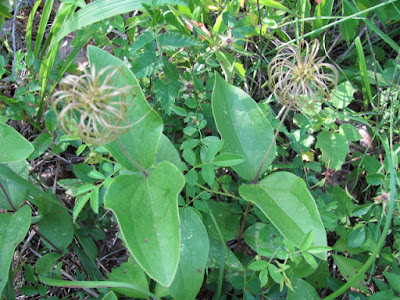 The name "curly top" might come from the way the flowers curl downward, or from the curly seedheads that are also characteristic of the more common kinds of clematis. 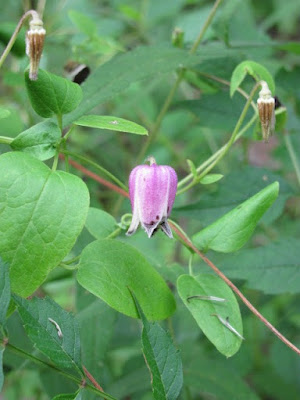 Another clematis in the piedmont prairies of NC is leatherflower, Clematis viorna, a small vine whose flower also points downward.
Witness a high quality piedmont prairie, and you'll see how rich and diverse an intact native habitat can be. Though cheated of the periodic fires that used to sustain them, prairie remnants have persisted here and there, mostly under roadside powerlines where trees were not allowed to shade them out. I've rescued plants from a few that were being lost to development, and marveled at how each shovelful would contain four or five species. Nature was demonstrating how co-evolution moves towards a rich coexistence. Presumably, each species is limited in some way, most likely by herbivory, from running roughshod over the others.
Witness that, and a monoculture of autumn clematis will look both showy and disturbing. 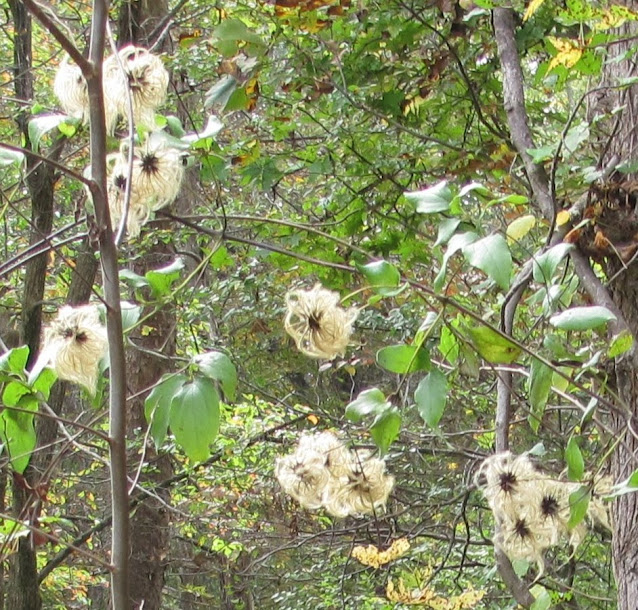