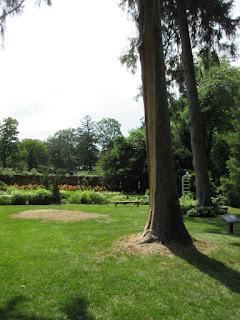 There's a puzzle in this picture, which shows one tree where two trees once stood. The second tree is evidenced now only by a patch of brown mulch on the left. The story told by Pam Ruch of Morven Museum and Gardens is that a lightning bolt hit the first tree, stripping bark from one side. They thought for sure that the wounded tree would die, but instead, a couple years later, the tree next to it gave up the ghost. 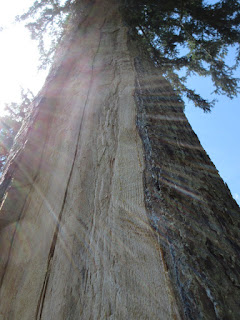 What happened? Apparently, the lightning penetrated into the ground, then traveled over to the root system of the neighboring tree, where the full electrical force was delivered. The effect was a deadly version of an old slapstick routine, in which the target of the punch ducks, causing the punch to land on the next one over. The first tree was conduit, the second tree victim. The first tree bore the visual symptom, the second tree bore the invisible brunt.

There's been a theme of thunderbolts lately. I've been memorizing a monologue of King Lear--part reveling in, part railing against the elements as he stands out in the heath engulfed in a storm, amidst "oak-cleaving thunderbolts" and "all shaking thunder".

And then my friend Perry sent me a photo of what we call the Lone Pine. Its bark, too, has finally been cleaved by a thunderbolt after many years standing alone on high ground at a nature preserve we created about 15 years ago in Durham, NC. There's such a thing as "witness trees", for instance trees at Civil War sites that were alive at the time of the battle. The Lone Pine is a witness tree of sorts, having witnessed the logging of all the trees around it some years before the land was donated to our nonprofit.

The outcome was more sanguine than King Lear's, because these 80 acres had a native seedbank waiting to mend the wound. With trees gone, dormant native forbs sprang to life in the newly abundant sunlight, coating the ground with a tapestry of sedges, grasses and wildflowers. Quail and woodcock flourished in the early successional habitat.

That rich chapter in the preserve's history, dominated by the height-deprived, came to a quick close, with the emphatic rebound of trees. If King Lear had been into land management, he might have railed against the sun-grabbing dominance of trees and the city's rigid ban on prescribed burns, and called on the thunderbolts to start some grass fires to maintain at least a few patches of open habitat, lest he lose the heath from which to call out his bottomless grief to the heavens.

The Lone Pine now has lots of company as young shortleaf and loblolly pines rise thick around it. But something in me misses that younger, more open habitat, when one pine stood lonely and defiant against the sky.

Note: When lightning touches sandy ground, it makes a material akin to glass, which happened some years back along the canal. My theory, untestable but which perhaps would find company in a google search, is that lightning gave early peoples the idea for making glass.