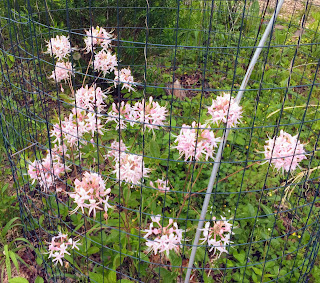 This spring, Herrontown Woods had its first big show of native azalea blooms in many decades. They were all on one bush, but it was a start. I counted the blossoms--25, which is 22 more than the grand total from five years ago. A friend who grew up in Princeton told me that wild azaleas had once been a common sight in spring. What caused them to disappear? The answer is more deer and more shade.
The pinxter azaleas are not the only species that has languished in the deep shade of the forest. Shadbush and hearts-a-bustin' have also been marginalized. It took some years of exploration to realize that they were still there, surviving in a miniature state, a foot or two tall, deprived of sunlight, nibbled down by deer.
One of the first to be spotted, during a morning walk five years back, was a spindly pinxter azalea that had somehow managed to grow three flowers, like a weak SOS signal coming from a distressed ship. When the shrub failed to bloom at all the following year, I responded by digging a small sideshoot from the base and planting it in the preserve's Botanical Art Garden, where we maintain the equivalent of a forest opening. Bathed in sunlight and protected from deer browse, the azalea has thrived in a way it never could beneath dense trees. 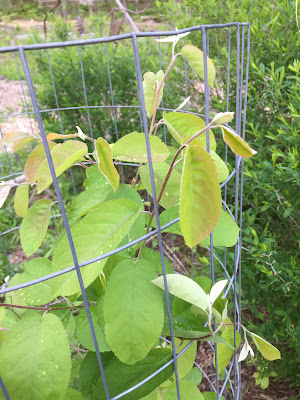 Growing next to the azalea in the botanical garden is a shadbush, so named because it blooms when the shad are migrating up rivers in early spring to spawn. It, too, is finally getting an opportunity to grow to maturity for the first time in decades. 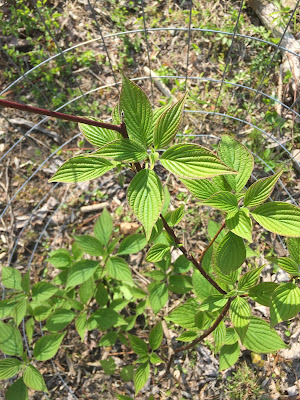 Another species seldom encountered along the Princeton Ridge--only two have been found in Herrontown Woods thus far--is the pagoda dogwood. It's alternate leaves (arising not in pairs but instead singly on alternating sides of the stem) give it another common name, alternate-leaved dogwood, and also its latin name, Cornus alternifolia. The flowers aren't that showy--pompom-like clusters reminiscent of the more common silky dogwood--but the pagoda-like shape of the branches is striking. Hopefully we'll be able to witness that as this one grows up in a sunnier location than is available among the dense trees of the woods.
Other size-disadvantaged woody species being brought into the botanical garden to get out of the shade and deer browse are hazelnut, persimmon, and hearts-a-bustin'. 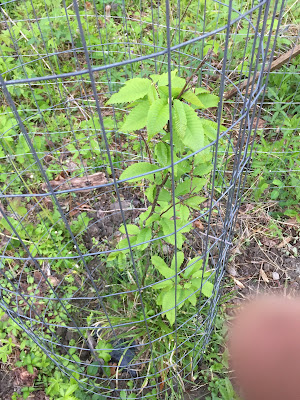 A native chestnut tree is also checking out its new home in the botanical art garden. The chestnut has been disadvantaged in today's forested preserves not by limited size but by the lingering chestnut blight disease that nearly eliminated them from the continent a century ago. This one is 15/16th native, crossed with an asian species that hopefully conferred immunity. Unlike the other woody plants mentioned in this post, the planted chestnut is not a local genotype.
In the early days of the Herrontown Woods preserve, there was a chestnut tree still growing along the yellow trail. The blight doesn't affect the roots, so it essentially sent the species "underground." Chestnuts persisted to some extent by sending up suckers that would grow to ten or twenty feet before succumbing to the fungus, at which point yet another sucker would be generated, to meet the same fate. Eventually, I suppose, the roots ran out of energy to keep sending up suckers.
Butternut, too, has been laid low more by introduced disease than by size limitations, and will be getting a home in the botanical garden.
Add to these woody species all the sun-loving wildflowers that have an even harder time surviving in our tree-dominated preserves, and it becomes clear that what we have created at Herrontown Woods is a place where disadvantaged native species can have a chance to show their stuff. This opportunity for upward mobility was once built into natural systems, back when megafauna and fire served to set back the trees, when deer were kept in check by predators, and long before invasive species stifled with their overwhelming growth. We love our trees. For many people, trees are a symbol of nature itself, and yet it's important to remember that the less lofty species are also part of nature, and have as much claim as large trees to a place in our preserves. Thus, "plant a tree", for all its resonance and popular appeal, is more relevant to our streets than our preserves when it comes to actions we can take to heal nature and nurture diversity.
Four additional native azaleas were added to the Botanical Art Garden last year, rescued from deep latency and finally given a chance to grow. In time, they could make for a really big show, and it all started with a floral SOS along a trail.
Posted by Steve Hiltner at Saturday, May 15, 2021

Email ThisBlogThis!Share to TwitterShare to FacebookShare to Pinterest
Labels: shrubs