Some Early July Flower and Insect Sightings at Herrontown Woods 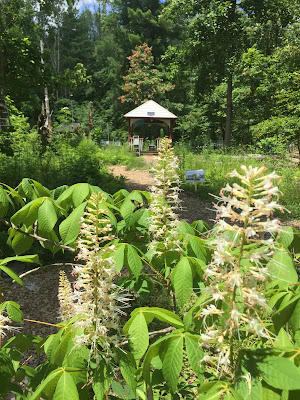 Though the bottlebrush buckeyes in this photo have been blooming in the Botanical Art Garden (Barden) for a couple years now, this photo could not have been taken last year. The gazebo in the background is a new arrival as of last December, and the pin oak behind it can be seen heavily flagged this year by the egg laying of periodical cicadas.

Those features were not the reason for the photo, however, which was taken because of an insect that requires a zooming in to see. 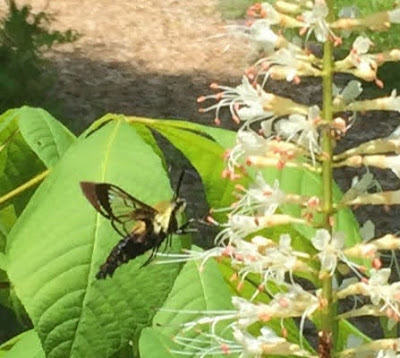 The Bottlebrush buckeye blooms attract clearwing moths, which do an excellent imitation of a hummingbird in appearance and flight. 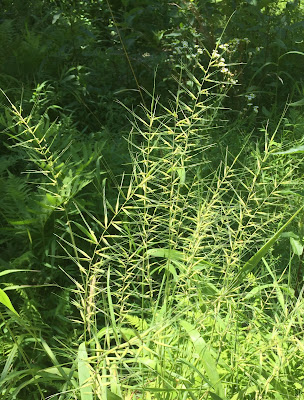 Another plant named for the bottlebrush shape of its flowers is bottlebrush grass, also blooming now at the Barden. The wind-pollinated flowers of grasses and sedges lack color, but can still be appreciated for their shape. Bottlebrush grass is called a cool season grass because it greens up early in spring and blooms before the depths of summer. Many other native grasses are of the warm season variety, like Indiangrass, big and little bluestem, broomsedge, and switchgrass. Dominating tallgrass prairies of the midwestern states, they get a late start in the spring and grow through the summer, reaching maturity in the fall. (Turfgrasses have the same categories, though the grasses aren't native. Most lawns around here are cool-season grasses, with bermuda grass being a warm season grass that turns brown in winter.) 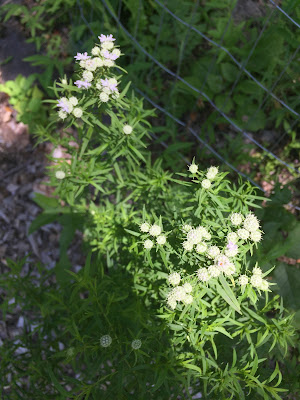 Though many species at the Barden have been planted, narrowleaf mountainmint apparently found its way in on its own, growing along one of the paths.
Necessary for the prospering of these summer wildflowers is an opening in the tree canopy where sunlight can reach the ground. Though people often equate habitat health with trees, we actively remove many young trees in the Barden that would otherwise grow up to shade out all these herbaceous species that insects depend upon for summer sustenance. 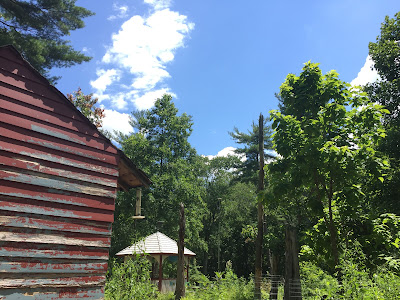 Because of this active management, you can look up from the Barden and see some open sky--rare in Princeton open space lands. 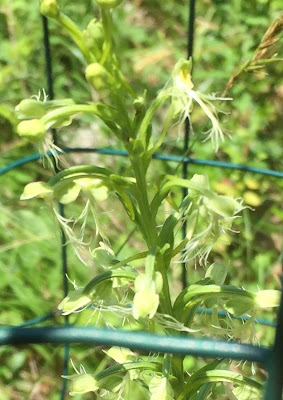 Growing on its own, in what few openings occur naturally at Herrontown Woods, is a very subtle green-fringed orchid, here protected from the deer by a small cage. 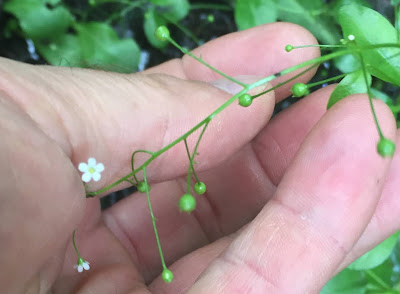 And what's blooming in summer in the deep forest that makes up the great majority of Herrontown Woods? I found this one tiny flower in a stream. Local botanist Elizabeth Horn helped me identify it as Water-pimpernel--Samolus valerandi in the
Theophrasta Family.
The take-home lesson here is that woodland openings are important for summer biodiversity. Given the lack of natural disturbance by wildfire or the long-gone megafauna, it's up to us to create and sustain it.
Posted by Steve Hiltner at Friday, July 09, 2021