The Dragonflies and Damselflies of Rogers Refuge 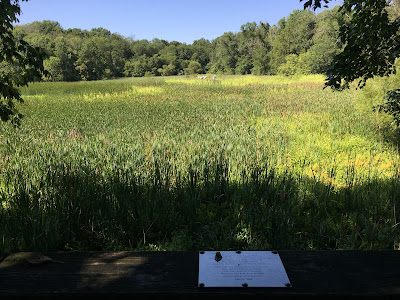 I still remember the astonishment I felt when I first climbed the observation tower at Rogers Refuge in Princeton, and looked out upon this vista, so unlike anything else in town. This expanse of cattails and wild rice, long valued as a birding mecca, remains a gem primarily due to the work of a small group of volunteers, currently led by Lee and Melinda Varian. Grants from the Washington Crossing Audubon help keep invasive species at bay, and Laurie Larson has compiled the site's history and features at rogersrefuge.org, including lots of bird info and an ecological assessment I did back in 2007.
This summer, Hopewell Valley science teacher Mark Manning and his son are working on a new list for Rogers Refuge, this time of Odonata, a.k.a. dragonflies and damselflies. Mark's knowledge of nature is broad and deep, as became evident during a wonderful walk he led at Herrontown Woods a couple years ago. Below is a preliminary list of species he and his son have found during their explorations this summer. The photo is of a black-shouldered spinyleg. 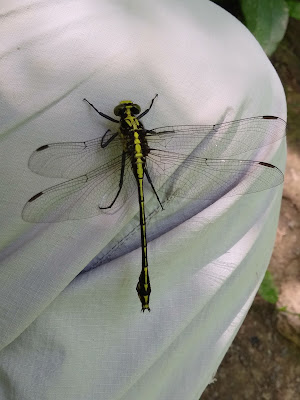