Spotted Lanternflies at the Barden 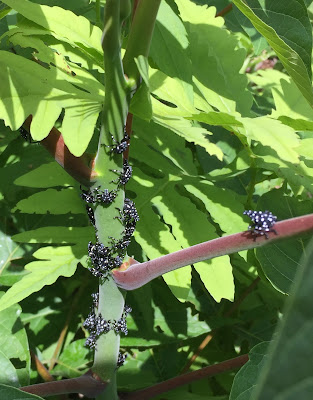 While periodical cicadas have been the most noticeable insects at the Botanical ARt garDEN in Herrontown Woods, the nymphs of spotted lanternflies have been congregating quietly on a few select plants. Our observations confirm what's widely stated, that the spotted lanternflies prefer to spend their quality time on Ailanthus, also known as Tree of Heaven, a tree introduced long ago to the U.S. from Asia.
I've been going around, cutting the sprouts of the Ailanthus in an effort to at least discourage the lanternflies' favorite plant. 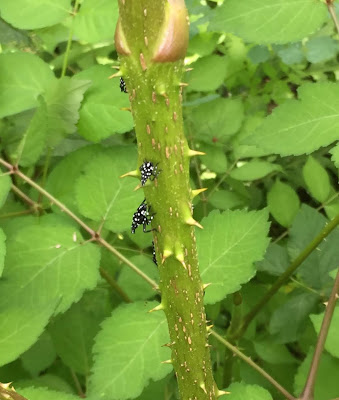 Another asian species, the ever so spiny Japanese aralia, is also attracting a few of the lanternfly nymphs, but not nearly as many. That, too, gets cut to the ground. 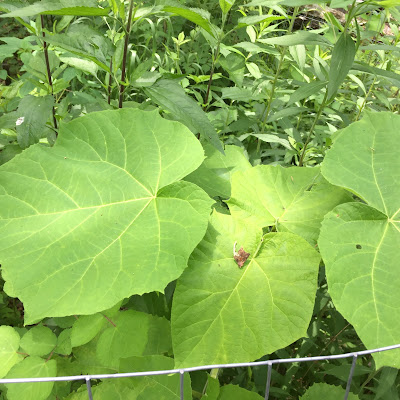 Princess tree had none, though it too hearkens from east Asia. You may notice this species making dramatic, large-leaved root sprouts along the canal and elsewhere. Scroll down at this post about towpath wildflowers to see a photo of a princess tree's root sprout's improbable growth.
All three of these nonnative species persist in the Barden as sprouts that we cut down. It would be nice to think that reducing the number of ailanthus and Japanese aralia will discourage the lanternflies as well. 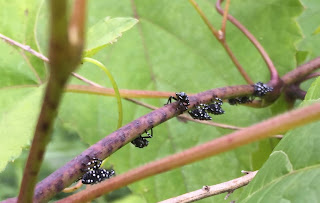 Among native species the spotted lanternfly is attracted to, a friend has a grape vine that is attracting a lot of lanternflies. She tricks the nymphs into jumping into bottles of soapy water.
Here's a post from last August with more info on the lanternflies.
Posted by Steve Hiltner at Thursday, July 01, 2021