Thoughts about insect decline and some field observations came together at the corner of Harrison Street and Terhune the other day when I headed to the optical shoppe to get my glasses adjusted. 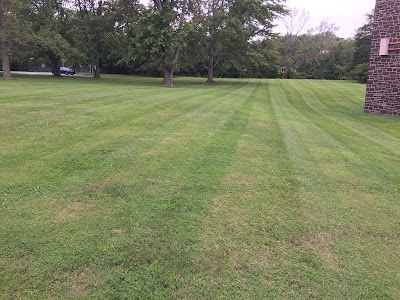 The lawn outside the building could be described as an ecological desert, a large expanse of closely cropped grass whose only purpose is to flatter the building. And yet it seems right to our culturally conditioned eyes, which view it as greenspace even if it constitutes an ecological void. 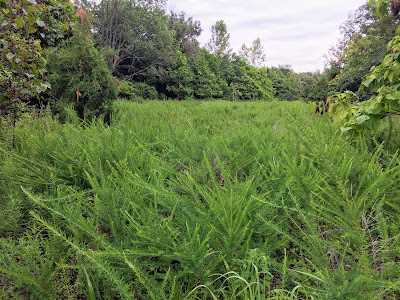 Whereas a lawn is an intentional monoculture enforced directly by people, this expanse of Sericea lespedeza, also called Chinese bushclover, is enforced by the aggressiveness of the plant itself. I've watched this field, on land next to the shopping center, gradually become overwhelmed by the introduced species, whose foliage is spurned by the local wildlife, including insects. 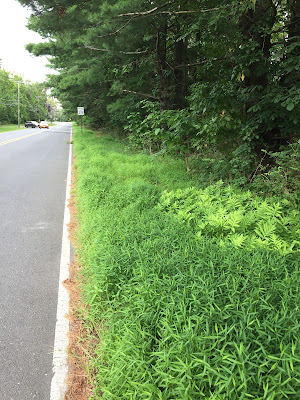 Thirty feet away, the Japanese stiltgrass is having its way along Terhune, as it does along so many roadsides. This displacement of diverse flora, whether suddenly in the form of a development, or gradually along roadsides or in abandoned fields, surely is playing a big role in the diminished habitat for the insects upon which ecosystem foodchains depend.
Interesting to see the patch of lighter green in this photo. That's native sensitive fern, which is clearly holding its own against the stiltgrass. But this is one small victory in a landscape that has shifted dramatically towards monoculture. Imagine what it would be like to walk into a supermarket and find only cardboard on the shelves. That must be how an insect experiences so much of the suburban landscape.
Note: Just noticed that local birder and Princeton professor David Wilcove recently co-wrote an opinion piece in the Washington Post entitled "We need to figure out what's happening to the bugs--before it's too late."