Each time I travel to Ann Arbor, where I lived off and on for 20 years, I make a pilgrimage to several special spots. 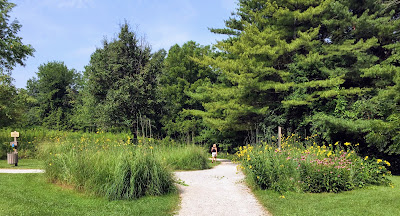 One of them is a small demonstration prairie I planted just a few years before leaving. It was my first public planting and, incredibly, it continues to flourish. I say incredibly because I've seen many idealistic native meadow plantings degrade over time, overrun by any number of aggressive plants, be they trees, shrubs, and native blackberry, or a host of nonnative weeds like mugwort and Canada thistle. 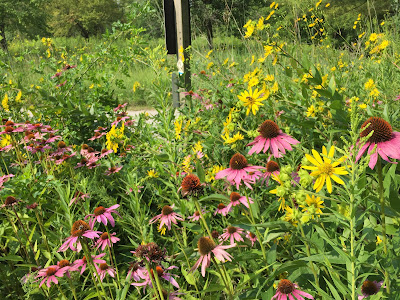 One reason it has survived is the native plants themselves, growing densely together, leaving no room for incursion. A tallgrass prairie is a robust plant community. In sunny conditions, flowers like rosinweed and purple coneflower can hold their own. 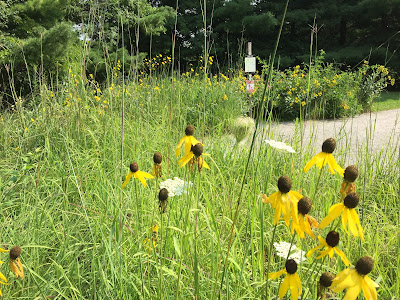 The gray-headed coneflowers--a species much like the cutleaf coneflowers we have in Princeton--have hung in there with the big bluestem and Indian grasses. There are also some wonderful goldenrods--"showy" and "stiff-leaved"--that stay in one place and don't encroach like many other kinds of goldenrod do. Even the nonnative queen Anne's lace, which you'll see taking over along midwestern roadsides, is somehow remaining limited in its aggressiveness. It's possible that a well established planting like this could need little more tending than a late winter mowing to keep the woodies at bay, but there may be some low-key TLC going on to keep things in balance.
I planted it in the early 1990s. The county naturalist at the time, Matt Heumann, helped with seed and design. His successor, Shawn Severance, sent me a very nice note about the prairie:

"That prairie planting has gone on in time to spread seed into the surrounding 4 acres and has enriched the diversity of the park far beyond the original footprint. It’s a continual reminder of the power of small actions. Since you did that planting, we have restored several acres of prairie habitat nearby and so what you set in motion has expanded." 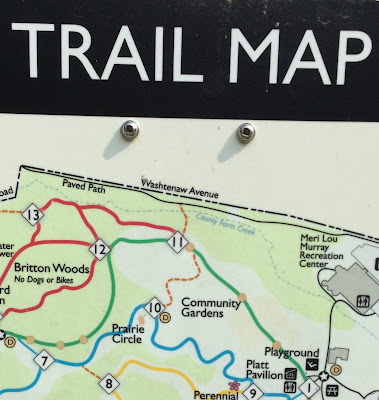 Heartening to think that focusing attention on one small planting could ultimately have a ripple effect on its surroundings. The prairie even made it onto the preserve's map, as the "Prairie Circle." There's another advantage this prairie has. Ann Arbor is a progressive town that has invested in the management of its open space. In addition to the county staff, the city has a Natural Areas Preservation Manager who oversees restoration of diverse habitats, controlling uber-invasives like buckthorn and conducting prescribed burns to bring back bur oak savannas and other historically prevalent habitats.

Having absorbed that culture and brand of wild horticulture, I was able to take what I learned in Ann Arbor and apply it in subsequent migrations to Durham, NC and then here in Princeton. It wasn't a matter of taking favorite plants along on the trip, but rather getting to know the species indigenous to any locale, and finding public places where they could be encountered by people otherwise surrounded by generic, nonnative landscaping.

There's a bench nearby that faces the Prairie Circle. I don't know who Omry Ronen was, but his loved ones must have thought he'd like an enduring view of tall grasses and wildflowers flowing with the breeze.

Come this Friday, Sept. 24 at 6pm, for a free event next to Veblen House in Princeton. Author Joan Maloof is coming to Herrontown Woods to d...