Silent Fall -- A Question About Songbirds

There was a question earlier this fall about the scarcity of songbirds on birdfeeders. Casey, whom I've known since our days on the Princeton Environmental Commission, wrote me on October 21:

"I am curious about the lack of birds - any birds - in our yard and on our feeders. It has been a couple of days now since I've seen any at all. Even walking down on the boardwalk across from the Great Road was silent yesterday. Clearly worrisome. Do you have any thoughts or theories? I figure if anyone does it will be you!" 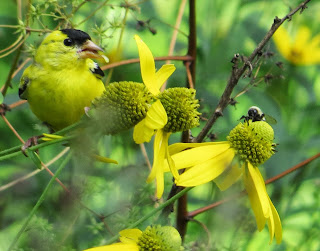 Well, though I am out in nature a lot, I'm pretty absorbed in plant life and don't tend to notice birds unless they make themselves heard or seen. Our backyard is full of native plants to offer seed and berries, but we don't get around to stocking the birdfeeder. There are times, though, this summer and fall, when I've wondered if past years had been so quiet.

I reached out to some friends who are close observers of birdlife, and got contrasting responses. This from neighbor Pat Palmer, who is a keen observer of birds in her backyard:

"We have a variety of birds, but far fewer than in previous years. It is migration season, so I think we are not seeing as many migrants as in previous years, but may only be seeing our resident local birds (due to our feeder).

Two (I think) years ago, there were so few birds in fall that we were in despair, but some came back by winter and it has been moderate since then. I would say last year was more (in fall) than the previous year. And this year is less than last year.

There is no doubt in my mind that this is a sign of declining numbers of songbirds. Just about the saddest thing I can imagine. We diligently feed and groom our yard to be good songbird habitat, and still so very few.

We have two bird houses that used to fully occupied 365 days a year. They sometimes have sparrows, sometimes wrens. This year, no occupants. That is ominous. We did have a wren but it was just passing through. We have a few sparrows but they don't use the houses.

We are watching the natural world start to suffer from all the pollution in the environment, as well as climate change, I think."

Laurie Larson, who maintains the website for Princeton's birding mecca, Rogers Refuge, sent a different take on the situation:

"I have people asking me about that as well. This summer’s weather was good for growing natural bird food… In years of abundant fruit and seed production, birds prefer natural foods over feeders. Wait until the berries and rose hips are gone, and the birds will probably return.

And have you noticed a lot of Blue Jays this year? Not at feeders, but in the woods. Some parts of the state are enjoying a huge acorn crop, and that always attracts Blue Jays."

I don't see these two responses as contradictory, but as part of a larger phenomenon driven by the supercharging of the atmosphere with carbon dioxide--a 50% rise in CO2 concentration since the beginning of the industrial revolution. The warmer weather allows us to work outdoors deeper into fall and winter. Some species are benefitting from the abundant summer rains. And yet along with this autumn comfort and productivity there is a dread, a sense of foreboding, at the radical changes being unleashed.
Posted by Steve Hiltner at Sunday, December 19, 2021