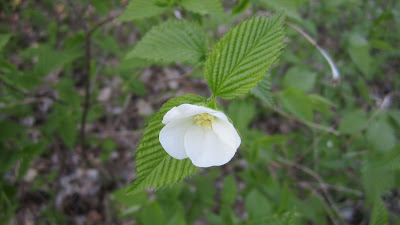 When I first encountered this flower eight years ago, growing near the small red barn in Herrontown Woods, I didn't look very closely and thought it was mock orange. A few years ago, the town hired the Invasive Species Strike Team to treat some non-native species that are just starting to spread through local preserves. To my surprise, this small shrub, which they called jetbead, was one of their targets. The aim was to catch invasions early, so that a small problem wouldn't become a big problem later on. 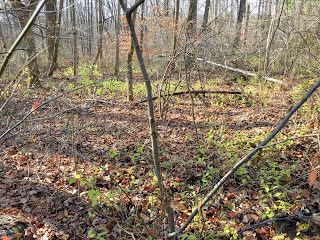 Last week we were giving Princeton's new Open Space Manager, Cindy Taylor, a tour of Herrontown Woods, and as we approached the barn we happened to see this flush of green amidst the browns and grays of late fall. 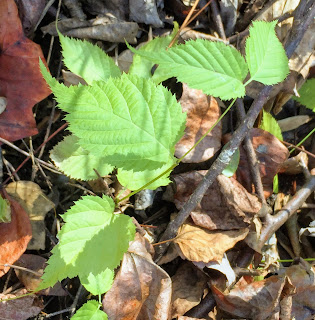 I took a closer look and realized that we were seeing seedlings of jetbead. The Strike Team had killed the mature shrubs, but there were seeds in the ground that had since sprouted. Though many invasive shrubs have spread throughout the preserve, this infestation of jetbead was only a couple hundred feet across. 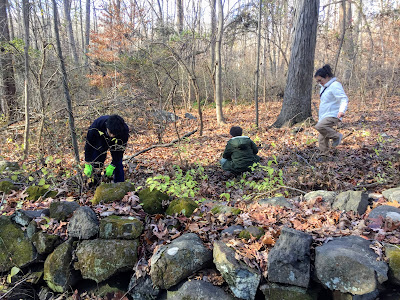 Yesterday, on our regular Sunday morning workday, volunteers pulled out every last jetbead we could find. The timing was perfect, because the seedlings were easy to spot and the soft soil made them easy to pull. A few more days and the leaves might have fallen off, making identification much more difficult.
Taking care of a nature preserve seldom provides such a clear sense of accomplishment. Usually the problems we face are overwhelming, and we can only chip away at the edges. It shows how important it can be to catch problems early and time interventions well.
After a morning of wild gardening, our spirits buoyed by a light-filled woodland and a sense of accomplishment, it was time to take pleasure not only in presence but also in absence. 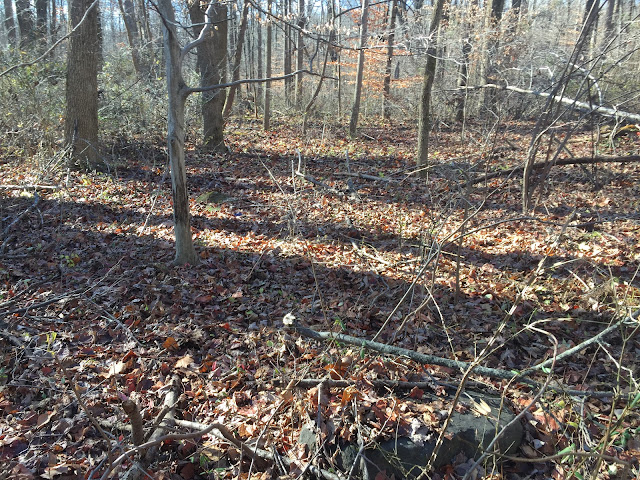 Some notes:
Jetbead (Rhodotypos scandens) -- This NC State website also calls it "white Kerria", which fits, if you've ever seen Kerria.
Shrub honeysuckle (Lonicera sp.) is another invasive shrub that can still have a few green leaves this time of year, but its leaves are not toothed.
Mock Orange (Philadelphus coronarius) -- I know mock orange as an ornamental shrub that can still be found occasionally in backyards. Not to be confused with osage orange, or orange, for that matter.
Posted by Steve Hiltner at Monday, December 13, 2021