Native Chestnuts in Princeton--the Next Generation

Many of us have lived our whole lives without seeing a mature native American chestnut tree. An excellent NY Times Magazine article described it as a true gift of nature, the perfect tree, growing straight and tall, with rot-resistant wood, and bearing nuts that were easily gathered and eaten, sustaining wildlife and people alike. My first encounter with the American chestnut was the sight of their fallen trunks in a Massachusetts forest, 70 years after the fungus that causes chestnut blight was discovered in NY city in 1904. The massive trunks I saw, lying on a slope in the shade of young white pine, were among the billions that the accidentally imported fungus would ultimately kill in the U.S. Since the roots survive the fungus, there was still a living community of underground chestnut trees beneath our feet in that Massachusetts forest. One of the roots had sent up a sprout about twenty feet tall--promising, one would like to think, but its slim trunk was already ringed by the fungus, its fate sealed before it could bear nuts.

One of the projects I'm involved in is reintroducing native chestnuts to Princeton. The initiative began in 2009 with an email from Bill Sachs, a Princetonian with considerable expertise when it comes to nut-bearing trees. Bill reported that Sandra Anagnostakis, "one of (if not the) world’s leading experts on the pathology of American chestnut," had agreed to supply us with disease-resistant, hybrid American chestnut trees. Sandra's efforts to breed resistant native chestnuts at the Connecticut Agricultural Experiment Station over many decades was apparently unconnected to the American Chestnut Foundation. The trees were 15/16th native, and Bill with occasional help from me and others proceeded to plant them at the Princeton Battlefield, Harrison Street Park, the Textile Research Institute, Mountain Lakes and Herrontown Woods. 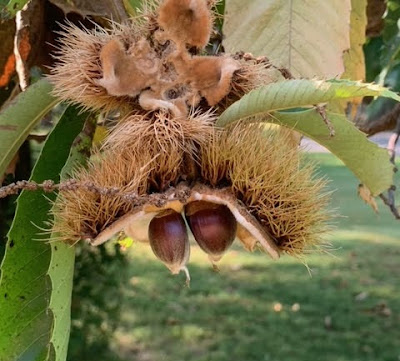 Some fared better than others. Many, despite having been bred for resistance, nonetheless struggled with the blight that had laid the mighty tree low a century ago. This fall, however, paralleling our work to bring back native butternuts, one of the chestnut trees has borne fertile seeds. 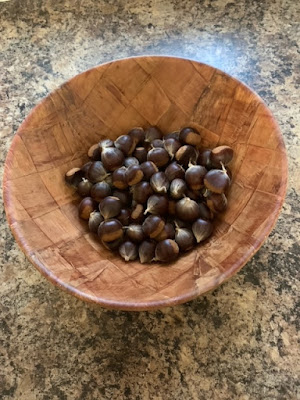 Bill made repeat visits to the tree to collect the nuts as they ripened. The deer likely got many, but he managed to gather quite a few, some of which he encouraged me to cold stratify. Stratification has always been an intimidating concept for me, suggesting sophisticated manipulation to get a seed to germinate, but in this case it turned out to be not much more than stuffing some seeds in a bag of moist peat moss and leaving it in the back of the refrigerator for awhile. 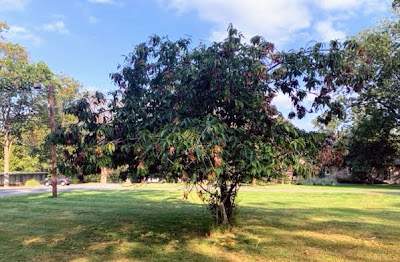 The tree, hosted by TRI near Carnegie Lake in eastern Princeton, bore generously despite significant pruning by the periodical cicadas early in the growing season. 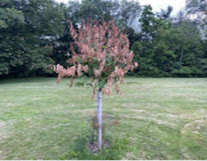 This past summer a friend had sent me a photo of another chestnut tree that, being smaller, was much more affected by the cicadas' egg-laying activities. They cut into stems to lay their eggs, which ends up killing the foot or two of stem beyond where the eggs are deposited.
We'll see how these various trees do over time, and if a second generation of these mostly native chestnuts comes into being. The NY Times article was mostly about efforts to develop a blight-resistant American chestnut through genetic modification. That thirty year project, with a geneticist named William Powell as the main protagonist, has been successful. They managed to find a gene in wheat that confers resistance when inserted into the chestnut's genome.
Adding one gene would seem a much more precise and less intrusive means of correcting a century old wrong than adding many genes, most of which are irrelevant to improving resistance, from asian chestnuts. But don't expect these ever so slightly and efficiently modified native chestnuts to be available any time soon. There are strict regulatory hurdles that must be overcome.
For me, the situation demonstrates two powerful forces in the human world. One is the fear of the slippery slope. Would an elegant genetic fix for the American chestnut open the doors to a wave of less admirable genetic modifications of our world? The other powerful force is our focus on regulating intentional change, while allowing unintentional change to run rampant. While the government spends years deliberating over one gene being added to the native chestnut tree, global trade is introducing an ongoing wave of new organisms to the country, any one of which could be the next emerald ash borer or spotted lanternfly.
In the meantime, we'll be thankful for the mostly native chestnuts we have, and see what we can grow.
Below is more info I've taken from some of Bill Sachs' emails. Click on Read More.

Chestnuts are wind pollinated and require cross pollination for a good crop. The chestnut at TRI has developed burs for a number of years, but the nuts have been by-and-large empty. Chestnut burs usually open while on the tree and begin dropping nuts in late September into October. There is/was a chestnut at TRI that I mistakenly planted in heavy clay soil that did not develop well and was a victim of deer browse. It was still there last time I visited a couple of years ago.

The bare-rooted seedling I/we planted at TRI in 2010 had a partial crop of viable nuts this year… most likely self-pollinated. The nearest Chinese chestnut is 2-300 yds across Prospect Ave and shielded by TRI woods. The deer like the nuts, too, so you need to be quick if you want some. This tree has blight but seems to have cordoned it off with lots of callus tissue. I picked 66 nuts on Sunday, October 3, and currently have them in the fridge, ready to be stratified.

This is one of several links that describe how to stratify chestnuts: https://homeguides.sfgate.com/stratify-chestnuts-78038.html. Some give their chestnuts a very brief wash in a dilute chlorox solution (1 part chlorox, 9 parts water) followed by a rinse in sterile water to prevent mold. My Connecticut contact always sent me chestnut seed packed in a zip-lock bag with moist sphagnum moss.

Put your chestnuts in a ziplock bag with holes in the vegetable drawer to prevent them from drying out… the damp sphagnum moss is needed for longer term storage and stratification over the winter. Examine them every week or two for rot and mold. Keep them damp/humid, but not wet. In 60 to 90 days radicles may begin developing if they’re going to germinate. Learn by making mistakes.

I’ve had mixed results in the past… In 2013 I received nearly 100 chestnuts from Connecticut packed in damp moss, stratified them and planted them in pots in one of Terhune’s green houses in early April. They had already begun to germinate and almost all of them resulted in a seedling. A year or two later, none of the seeds I received germinated. I have some sterile mix if you need some; I pretty sure it is sphagnum moss.