The Unbearable Whiteness of Being in June

Note: The memorable title "The Unbearable Lightness of Being" may not be as fresh in people's minds as it was in the 1980s when the novel and subsequent movie came out. There's nothing unbearable about white flowers, but there sure are a lot of them this time of year.

It was on a recent walk along the green trail at Autumn Hill Reservation that I suddenly noticed I was surrounded by white. 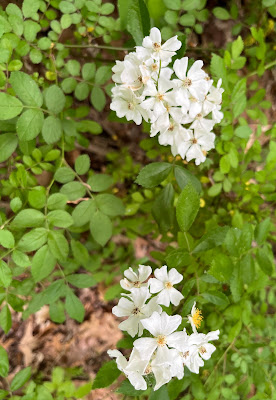 Mostly, it was invasive species: the white of multiflora rose 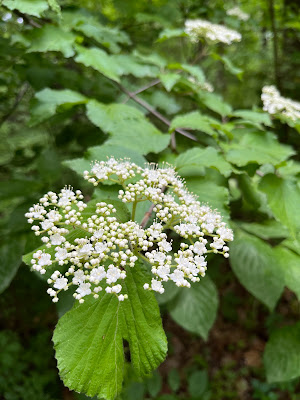 and Linden Viburnum. The prompt for the walk was to check the trails. The Friends of Herrontown Woods takes care of the trails at the adjacent Autumn Hill, and this spring's intervention was a boardwalk spanning a section that for years had been chronically muddy. The town's open space manager, Cindy Taylor, got the town crew to help out by removing some fallen trees, and I was checking to see if anything else was needed. 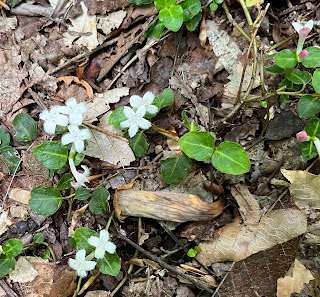 Though the nonnative shrubs were the dominant flowers, a few natives could be found, also with white flowers. A cluster of partridgeberry hugged the ground. The "repens" in its latin name, Mitchella ripens, refers to its crawling habit. 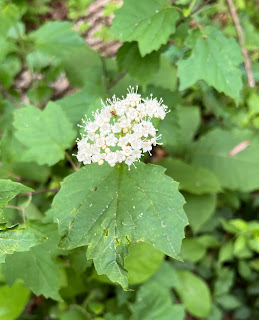 The mapleleaved Viburnums usually don't grow beyond a few feet. Their latin name is Viburnum acerifolium. The latin name for maples is Acer, so acerifolium is the latin way of saying maple foliage, or mapleleaved. 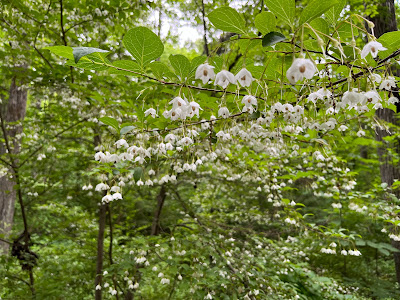 Almost missed among all the whiteness was a beautiful specimen of Styrax, probably American snowbell, S. americanus. It's on the left as one pulls into the Autumn Hill parking lot. My guess is that it was planted. I've walked by it dozens of times, but only when it flowered did I take note. That makes a grand total of two of this species seen thus far in Princeton. 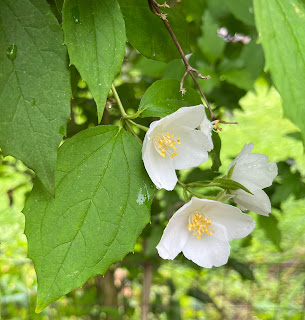 Back home, there was the mock orange-a once commonly planted landscape shrub that survives in my neighbor's yard, peeking over the fenceline. 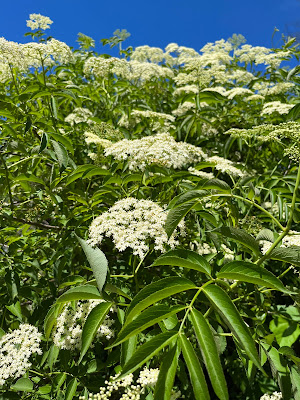 More whiteness comes from the native elderberry, whose berries make delicious pies if you can beat the catbirds, 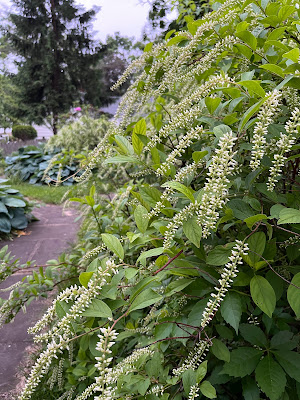 and the abundant spires of Virginia sweetspire. 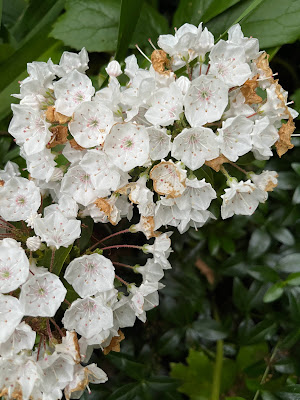 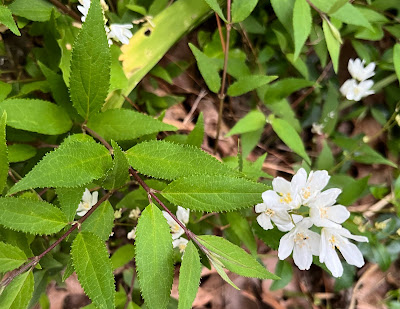 and the Deutzia in our yard are refusing to grow beyond one foot high for some reason. 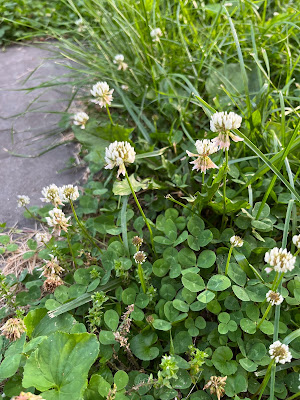 White clover can be benign in a lawn but mischievous if it invades a flowerbed. 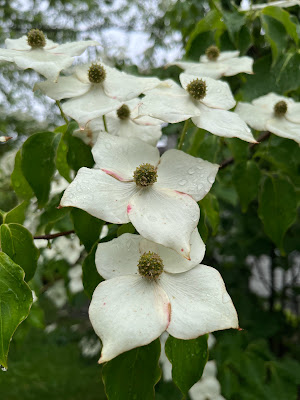 Update: Ten days after initially posting about white flowers, and feeling like the title of the post, though playful, sounds more judgemental than it would have ten years ago, I've noticed a few more. The Korean dogwood, for instance. 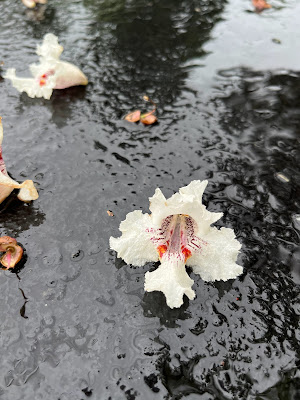 and catalpas, whose flowers reward a closer look. 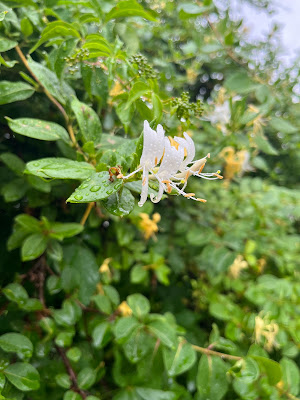 Japanese honeysuckle, which yield a drop of sweet liquid if pulled apart in the right way. 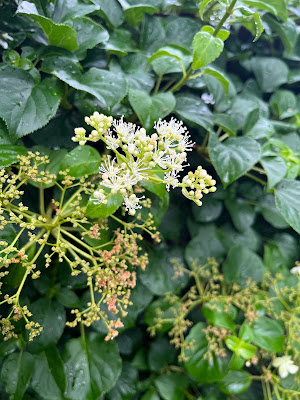 Some sort of hydrangia vine on our patio. 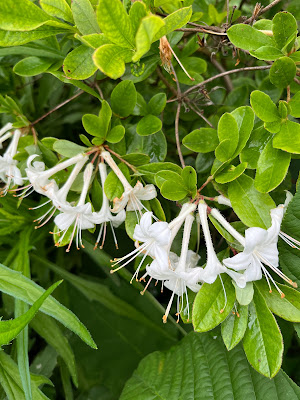 The flowers of a native swamp azalea. They look to be keeping their flowers downcast, as if to avoid eye contact. Too many zoom meetings. 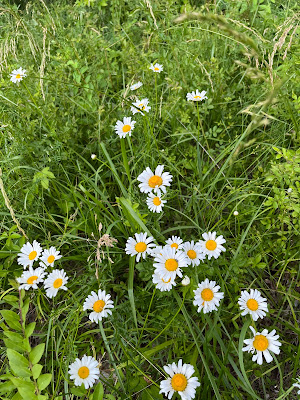 A small patch of daisies in a preserved pasture near Veblen House. 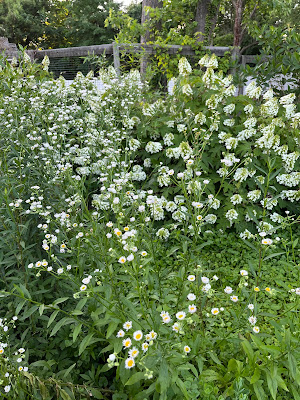 A white cloud of daisy fleabanes in the foreground, with an oak-leaved hydrangia in the background. 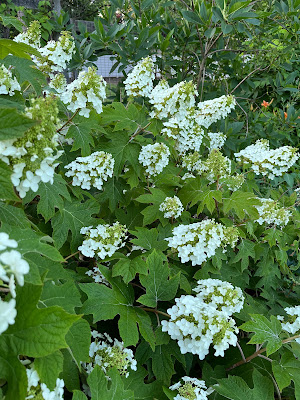 This oak-leaved hydrangia, native though I've never seen it growing in the wild, started as one plant, but over time it produced stems that could be dug without disturbing the original plant. We now have a whole grove of them.
The oak-leaved hydrangia is one of three classic native shrubs that sustain white in the garden through June, as Virginia sweetspire (above) segues into oak-leaved hydrangia, 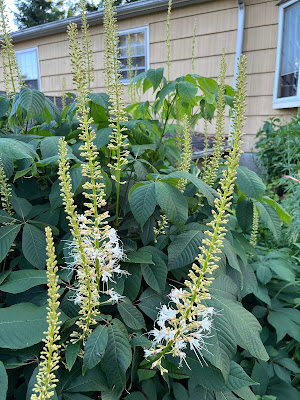 which segues into the bottlebrush-shaped spires of bottlebrush buckeye.
Why so much white? My curiosity did not sustain me very far into an internet search. Perhaps white takes less energy for plants to produce than other colors. White reflects the most light, which could help insects find it. And then there's the research that shows that pollinators don't actually see the flowers as white, and are picking up on aspects of the flower beyond human perception.
Below is beardtongue having a good year in the Veblen Circle of wildflowers at the Barden in Herrontown Woods.
Related post: The Unbearable Whiteness of Being in May 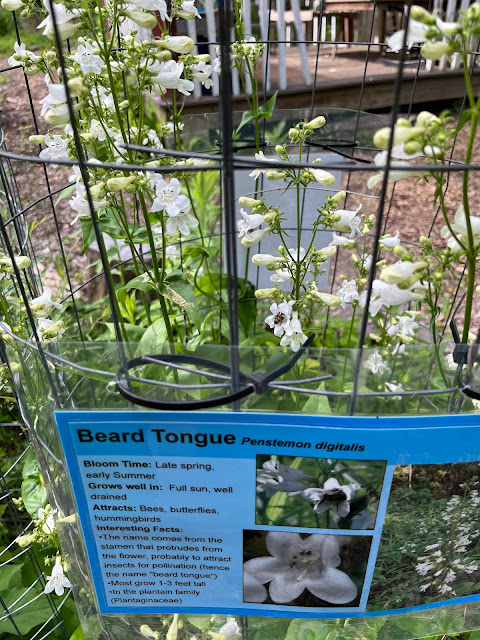