Shrubs and Vines to Cut Back Along Nature Trails

Without volunteers wielding clippers and loppers, most trails in Princeton would quickly become overgrown. Some preserves, like Mountain Lakes, Herrontown Woods and Autumn Hill Reservation, have more organized maintenance, but in some others it's catch as catch can. In May and June, that first flush of growth begins reaching out over trails, and so a pair of clippers is handy to keep in the back pocket during a hike. Cutting back anything that overhangs a trail is useful, but as a botanist I'm also identifying as I go along. Most of the shrubs that grow out into trails are invasive species that we'd want to cut wherever they are growing, but especially along trails. There are also some natives, but I'll start with the non-natives, which are so numerous mostly because the deer won't eat them. 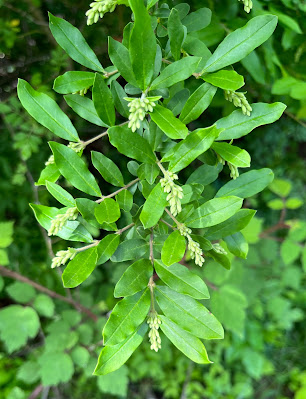 Privet -- A shrub that people plant as hedges, but which has spread into nature preserves, establishing dense stands. In low, wet, shaded areas, there can be thousands and thousands of these, claiming all the space. Most don't bloom because they are too shaded. 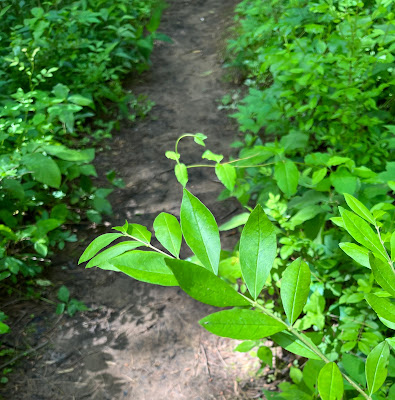 Here's a typical branch of privet growing out over a trail. 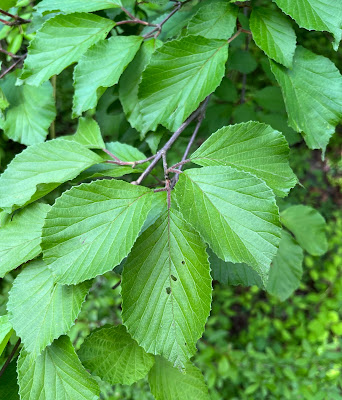 Linden Viburnum has become highly invasive, forming dense stands. It has attractive flowers and fall color, but is just way too aggressive. It looks a lot like the native arrowwood Viburnum (V. dentatum), which is relatively rare and has more deeply toothed leaves. 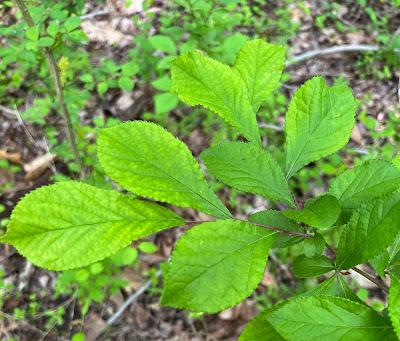 We commonly call this shrub Photinia, after its latin name. You can identify it by its distinctive obovate leaves, meaning the leaf is wider towards the tip. Names can get complicated in botany. The common name, which I just learned, is Christmas berry. The latin name was Photinia villosa, but that got changed to Pourthiaea villosa. Can you say "Pourthiaea"? Neither can I. In any case, it is another way-too aggressive nonnative shrub that we cut back or down. 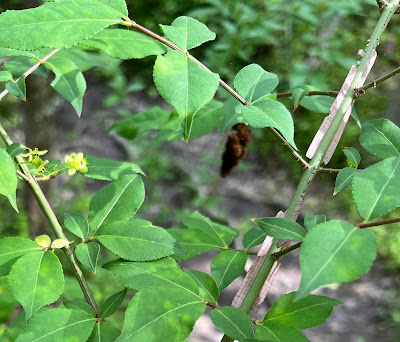 This shrub, winged Euonymus, is super easy to identify. Just look for the "wings" on the stem (those brown ribs that run along the stem). It, too, is a nonnative that forms dense stands and often obscures what would otherwise be lovely vistas from the trail. If you see a nice vista from the trail, oftentimes it's because we've been cutting these shrubs down to open up the view.

A common story about native plants in the wild: there's a native Euonymus, called Hearts-a-Bustin', but it's rarely seen because the deer love to eat it. We've nurtured a few specimens of it to show off at the Barden. 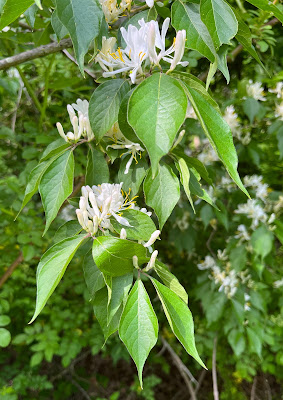 Bush honeysuckle -- Honeysuckle comes in the form of a vine (Japanese honeysuckle) and several species of shrub. it is frequently found along the edges of people's backyards--a sort of default vegetation that moves in on its own. It can also be numerous in some of Princeton's preserves. 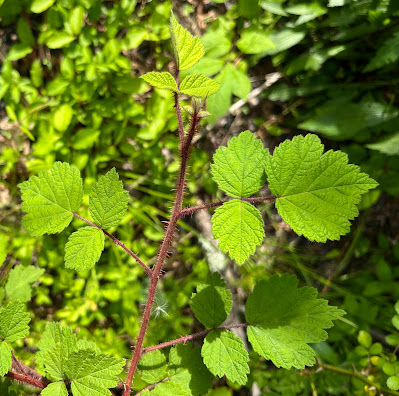 Wineberry is an asian species of bramble with distinctively hairy reddish stems. It has tasty berries, but we often cut or pull it, given its lanky, thorny growth. 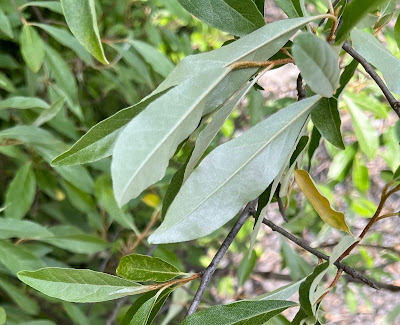 Autumn olive has a distinctive silver sheen on the underside of the leaves. While many invasive shrubs thrive in shade, autumn olive prefers sun, and so is infrequently encountered along our wooded trails. 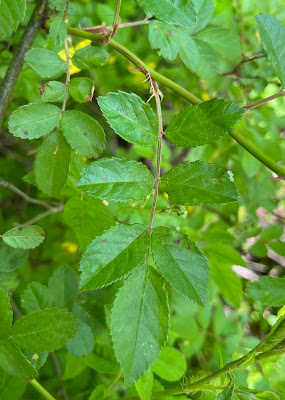 Multiflora rose is an introduced species that has made many a forest impenetrable with its curved "fishhook" thorns. Multiflora means many flowers clustered together, as opposed to the single flowers that many roses have. We definitely cut this one back, or down to the ground, to keep hikers from getting snagged.
Our native roses--at Herrontown Woods, that would be the very rarely encountered swamp rose--have single pink flowers, as opposed to the multiflora's clusters of white. 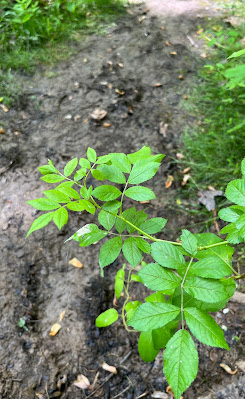 If you forgot your clippers, it's possible to avoid the thorns while carefully bending a young sprig like this one back on itself with your fingers until it snaps. 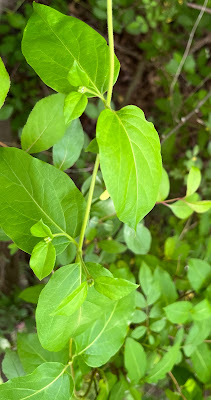 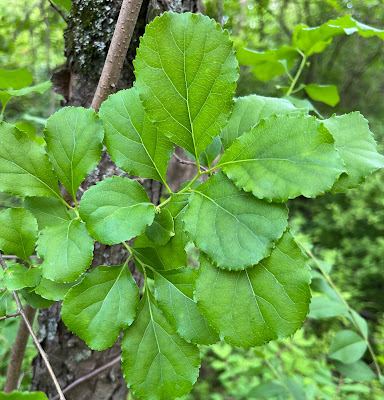 and oriental bittersweet. Both are easily pulled out. For more success in pulling them out, grab low and pull slow.
There are native versions of vine honeysuckle and bittersweet, but never encountered, as far as I know, in Herrontown Woods. 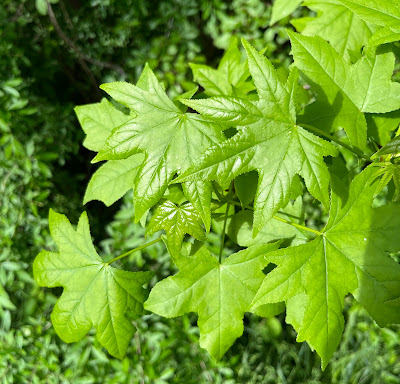 A common native along trails is sweetgum, which can grow into a statuesque tree but which we tend to cut or pull along trails, since its seedlings are so numerous. 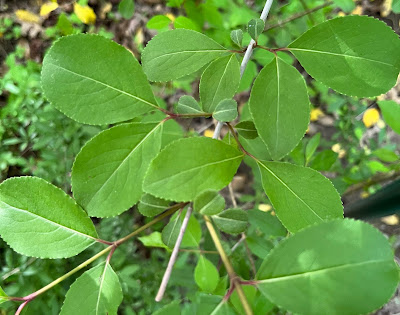 The most common native shrub is blackhaw Viburnum, which has tasty berries in the fall. Sometimes it can be distinguished from other shrubs by its pairs of tiny leaves tucked in among the larger leaves, growing tight against the stems. 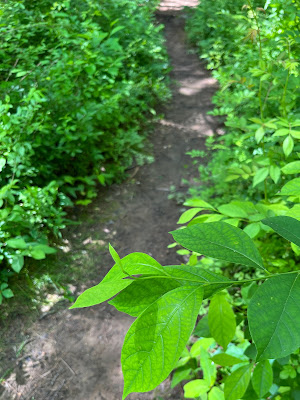 Another common native shrub is the spicebush, which has very fragrant, citrony leaves. 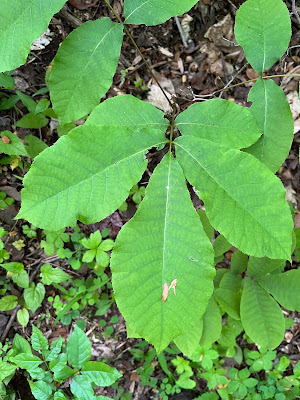 Hickories are common as well. This is a photo of one leaf with five leaflets.
I always feel some remorse while cutting native species back, but it has to be done if the trails are to remain clear.
Related post: Portrait of Sidewalk Neglect -- A post about plants that are growing over a neglected sidewalk.