Bluebird of Happiness -- Evicted by a House Wren!

Boy, was I naive. Last year we worked with a local girlscout troop to install some birdhouses at Herrontown Woods, and it was such a delight this spring to see bluebirds taking an interest in one of them, just up from the Veblen House. I'd walk by, listening to their merry chatter, and remember that I had once again forgotten to bring along a camera with a good enough zoom to photograph their comings and goings. Surely there would be time to catch a charming shot of their auspicious presence. 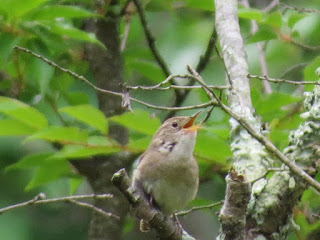 One day, however, a couple weeks ago, we were working on the Veblen House grounds, the bluebirds serenading in the background, when I noticed a different sound intruding. It seemed vaguely concerning, but I was so focused on my task that I didn't stop to take note of what was happening. 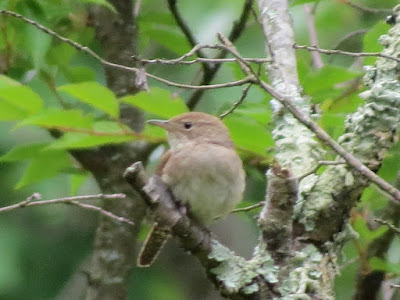 By afternoon, however, I sensed something had clearly changed, and dropped what I was doing to go over and have a look.
The bluebirds were nowhere to be seen, and in their place was one of the many house wrens that enliven the grounds with their loquacious chatter. 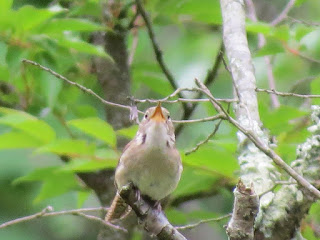 I had heard of wrens skewering other birds' eggs with their beaks, but hadn't thought much of it. This looked like an outright eviction. It was time to find out more. A website called sialis.org quickly popped up on the internet. Bluebirds are so loved they have their own website, named after their latin name, Sialia sialis.
Bluebird eviction by house wrens turns out to be common. I happened to run into a neighbor of Veblen House who said she, too, had had bluebirds evicted from her birdhouse.
The silver lining has been the discovery of the sialis.org website, which is a long and true labor of love, by a woman named Bet who lives in Connecticut. It's an old school website, with most pages packed with a plethora of information and a minimum of photos. You'll learn about dummy nests (birdhouses that male house wrens pack with sticks but don't get around to using), and things like wren guards for reducing the displacement of bluebirds. A "trail" on this website is not a nature trail, but a series of bluebird houses that one monitors weekly. Birdhouses, it turns out, are not something to install randomly and then pat yourself on the back for being a nature lover. Proper installation is just the beginning of a very active management akin to growing a garden. Though native house wrens pose a threat, the nonnative house sparrow is even more destructive.
The eviction of the bluebirds has left me newly ambivalent towards the house wren's perky chortle, but has raised my respect and appreciation for those who actively manage houses and habitat for birds.
Posted by Steve Hiltner at Friday, July 01, 2022