The Evolution of the Front Lawn in Ann Arbor, MI

Back when I was writing and performing climate theater, it was a very useful exercise to view things like the earth or the economy as characters. Upon reflecting on what sort of character a front lawn might be, I realized that the expanse of mowed grass is much like a trophy wife for the House. Expected to be well manicured, passive and forever young, the front lawn serves no other purpose than to present a flattering view of the House to the public. In return for its submissiveness, the front lawn is allowed, and in fact expected, to remain perpetually idle. Any shift away from bland formality, such as a wildflower meadow or, heaven forbid, a vegetable garden, would be unbecoming and steal attention away from the House. It seemed to me the front lawn could benefit from a good turf therapist who could help her sort through how she ended up in such a one-way relationship, and from that developed a monologue called Turf Therapy. 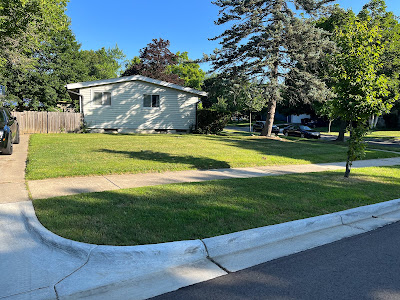 It's easy to knock suburban culture's striving for a sterile deep green conformity, and the chemical dependency and noxious lawn equipment that keeps it propped up. But most homeowners find themselves completely unprepared to own land, and the myriad kinds of plants that grow upon it. No surprise, then, that people try to turn the outdoors into as simple a landscape as possible, essentially an extension of the indoors. A lawn is the equivalent of a wall-to-wall carpet.
In our era, the expansion of the suburban lawn has coincided with a shrinkage in knowledge of plants. Each generation sprouts more distant from ancestors who farmed or foraged. And how many schools teach children to identify even the most common trees? 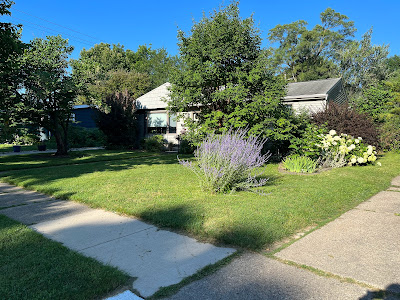 It's a brave homeowner, then, who dares take a shovel to the front lawn, bucking conformity to plant something more colorful, beneficial, and interesting. Usually, the change is wrought incrementally, expanding flowerbeds a little at a time.
While most plantings tend to hug the edges and stick close to the house, in this yard a Salvia is boldly asserting itself right out in the middle of the yard. 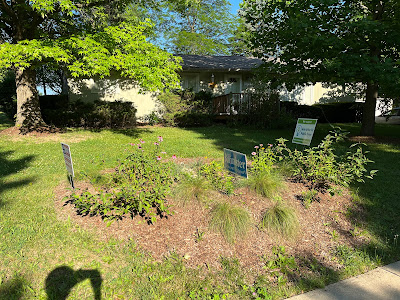 Just down this street, which happens to be called Easy Street, someone dug a raingarden that catches water piped to it from the roof. They used the dirt dug out of the hole to build a berm on the downhill side, expanding the hole's capacity. The wildflowers feed the pollinators while the signs feed passersby with ideas, like Public Power, in which a town takes ownership of its electricity and moves rapidly towards 100% renewable energy. 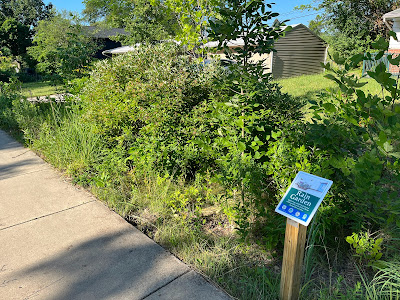 A neighbor further down has converted even more of the yard to raingarden, and added a sign from the local watershed association: "Rain Garden: Improving wildlife habitat and water quality in the Huron River one garden at a time." This is a nice sentiment that all too often remains on the fringe, but in this neighborhood it has caught on. 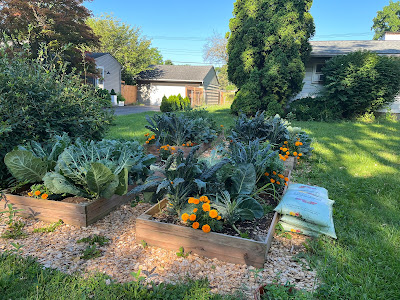 Next door is a vegetable garden in the front yard. It's starting to look like the trophy wife has decided to pursue a life of her own. Any House with an ego is going to be really upset. 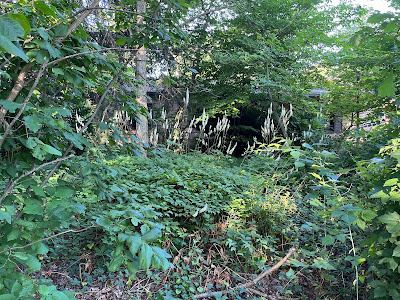 This homeowner, a friend of mine named Jeannine, has nurtured a burr oak savanna habitat in her front yard, with an understory of trilliums, plus black cohosh in its full mid-summer bloom. The House? Well, it's back there somewhere, having to accept that yards like to express themselves and have meaningful lives, too.
Interestingly, some of her bur oaks are getting tall enough to start interfering with the solar panels on their garage. She has started managing her front yard forest, removing larger trees while keeping smaller ones not tall enough to shade the panels. It's a way of having your trees and panels, too. Each tree removed leaves a legacy of roots--a network of carbon consumed from the air and injected into the ground. 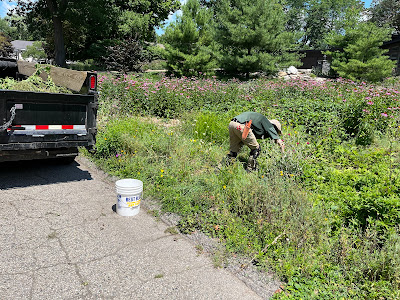 Even in more upscale neighborhoods, where homeowners can afford to hire landscapers, many yards are cared for by crews that carefully weed the wildflower meadows, displacing the noisy custodial crews that "mow, blow, and go." What a pleasure to bicycle through a lovely neighborhood with colorful, botanically interesting yards and a delicious quiet. Machines to suppress vegetation are replaced by skilled intervention to steer vegetation. All week in Ann Arbor, the neighborhoods were remarkably quiet. I looked online for information about bans on leaf blowers, and could only find a ban on 2-cycle lawn equipment in the city's downtown, passed in 2019. 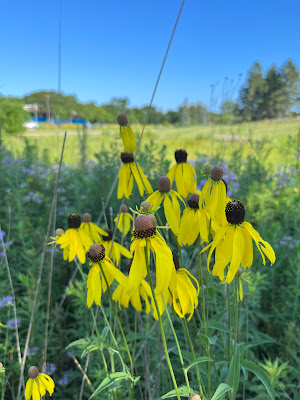 The shift from lawn to meadow in many yards was surely inspired in part by the work of Jeannine Palms, who with her preschool kids, neighbors and town staff have carved native wet meadows into what had been a vast expanse of turfgrass in nearby Buhr Park.
Their meadows have many of the same wildflowers we have in Princeton, with some differences. The photo shows gray-headed coneflower, which is close in appearance to our cutleaf coneflower. And they have additional kinds of Silphium (rosinweed, prairie dock, compass plant), and a grass called smooth cordgrass. 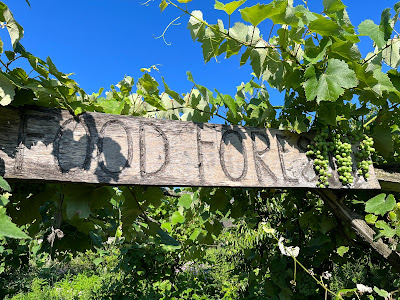 More recently, Jeannine has led a volunteer effort to shift even more of the park away from turfgrass, in this case to create a food forest packed with grapes, apples, pears, elderberry, pawpaw, currants, raspberries, strawberries, fennel, and a "three sisters" planting of corn, beans and squash. 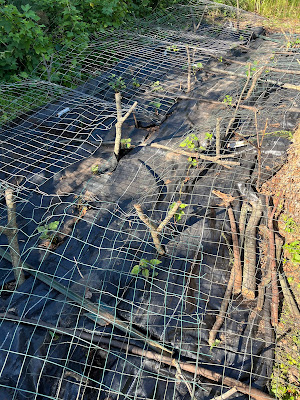 Here's an effort to grow sweet potatoes, not only for the tubers but also for the leaves, which are delicious. Fabric is spread on the ground to suppress weeds, and fencing suspended above to deter the deer.
The story of this heroic transformation is told in a sign posted next to the first wet meadows. In the process, they have brought diverse, edible life back to the land and the neighborhood. 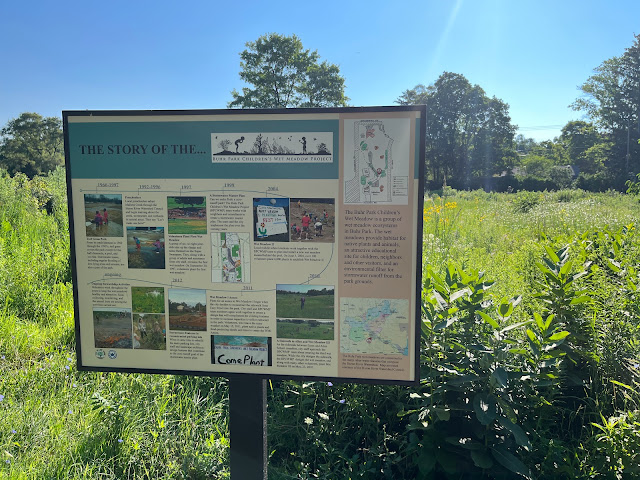 Monarchs and a Mid-Summer Multitude of Wildflowers at the Barden

So, I was at the Barden today, that being the Botanical Art Garden in Herrontown Woods, and amidst all the positive energy of budding flower... 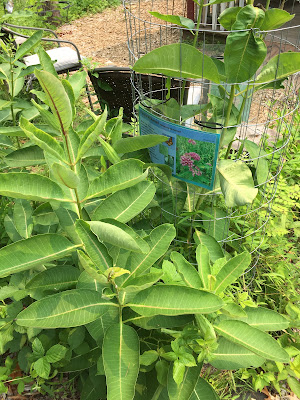