An effort to document everything flowering in the Botanical Art Garden at Herrontown Woods on one day in June (the 26th): 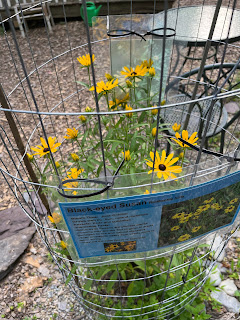 Black-eyed Susan in the Veblen Circle surrounding the gazebo. 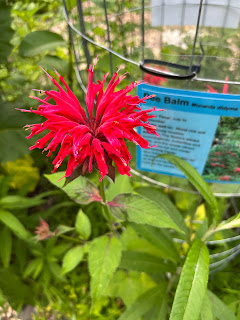 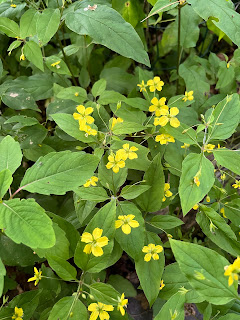 Fringed loosestrife is a shy native wildflower, pointed downwards, but is not shy about spreading. 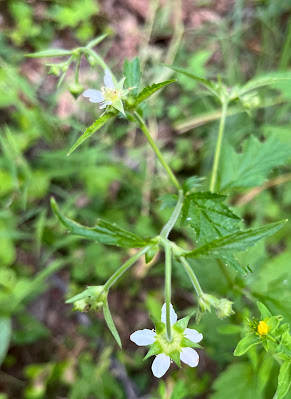 This is looking like white avens, a native that's also looking pretty shy. We tend to think of it as a weed, because it isn't very ornamental and makes burrs that stick to clothing. 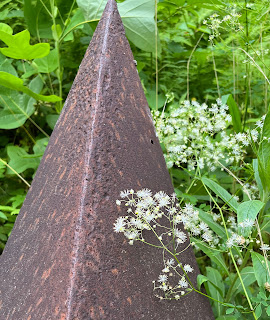 The tiny flowers of tall meadowrue make clouds of white in the Barden, sometimes rising to ten feet. I've found it growing wild in Princeton in only a couple places, but it grows well in a garden. 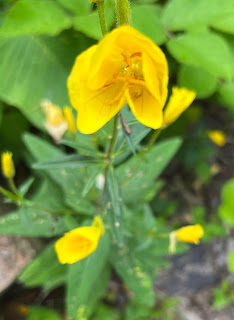 A few sundrops are hanging on, with their x-shaped stigma. This is an easy flower to grow, spreading a little but not too much. 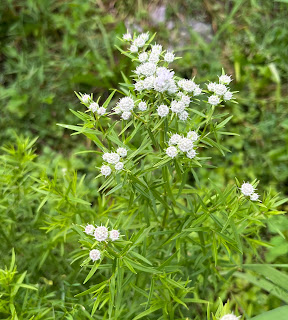 Narrow-leaved mountain mint is a native wildflower that appeared spontaneously in the Barden. It's a fairly common wildflower of meadows in the Princeton area. 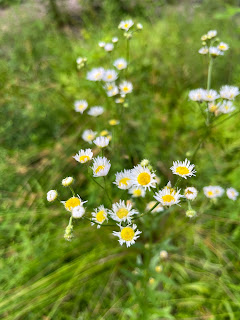 Daisy fleabane was blooming weeks ago and is still at it. There are two species. 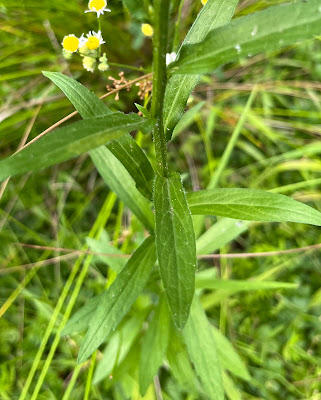 The untoothed leaves suggest it is Erigeron strigosus. 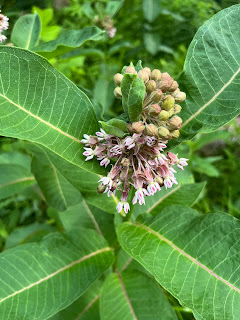 Common milkweed has spread rapidly at the Barden. I just met some Herrontown neighbors who grow milkweed, and their kids have already found two Monarch caterpillars that they adopted and grew into butterflies. 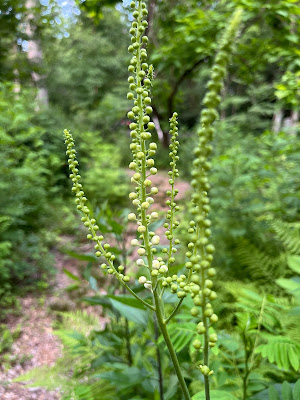 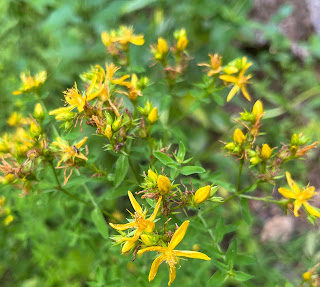 Some nonnatives are St. Johnswort, 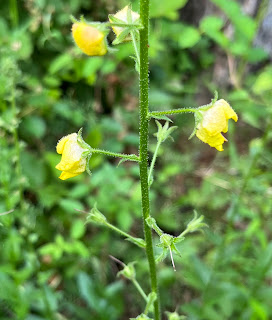 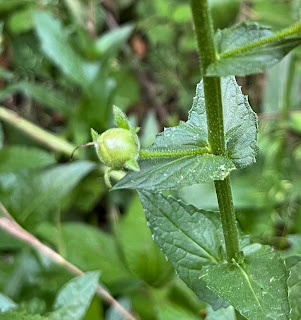 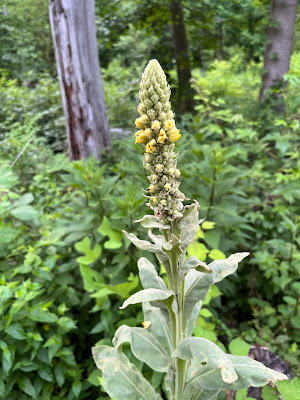 wooly mullein, which can spread by seed quite a bit but we allow a few to grow for their dramatic shape and the velvety feel of the leaves, 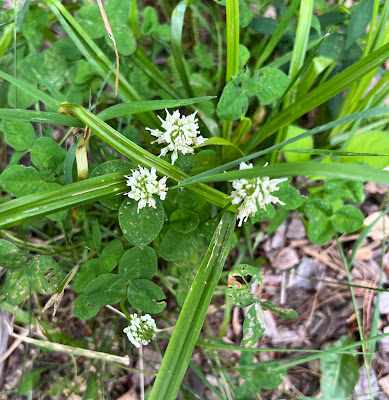 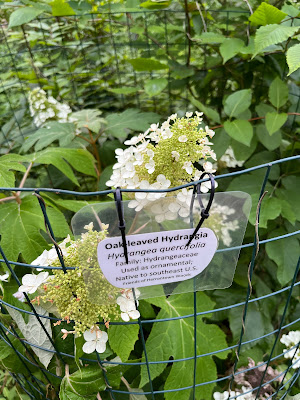 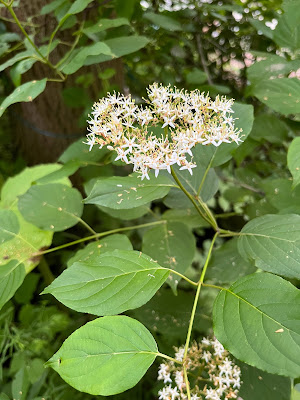 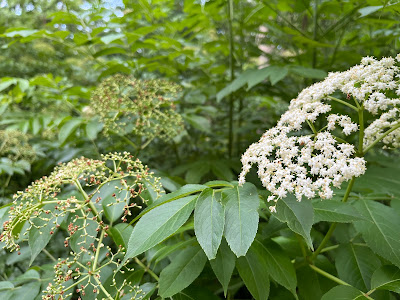 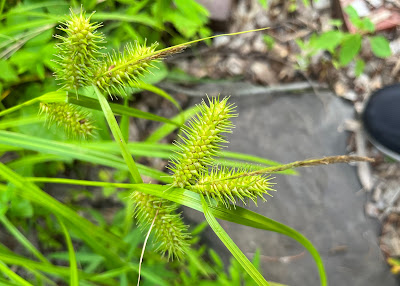 We're being very encouraging of sedges at the Barden, planting them in swales where they get plenty of moisture. They reach a peak of lush, grassy beauty in late spring, and each species has a different shape to the clusters of seeds. There are many species of sedge. I'm going to say this is Carex lurida, the sallow sedge. 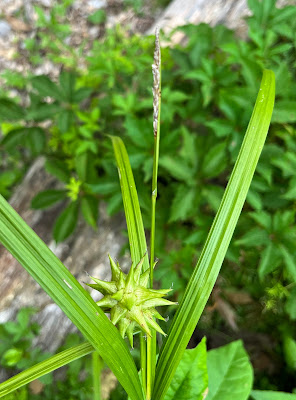 I'd call this the morning star sedge, Carex grayi. 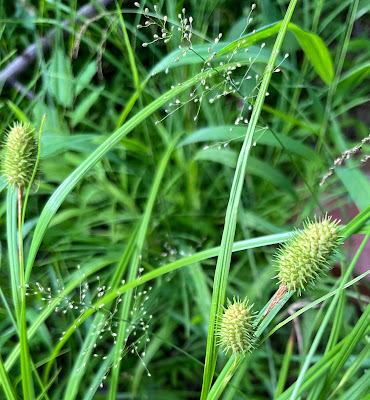 This is a fairly common sedge in Princeton in floodplains. I've long wanted to attach a name to it. Once I thought I'd found a name, then promptly forgot it. The mind is a terrible thing. 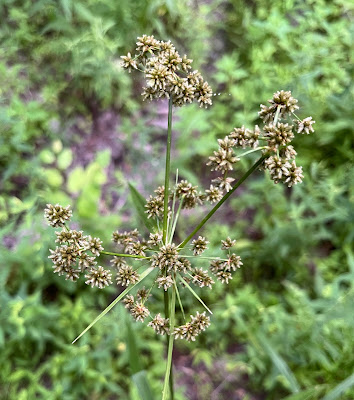 Rushes are not sedges, but this green bulrush is a sedge.
That's 21 species found blooming or fruiting on June 26, 2022. For some, this diversity is off-putting, but for those who love plants, the diversity just makes it all the more interesting.
Posted by Steve Hiltner at Monday, July 04, 2022