Princeton has no resident black bears, but they do occasionally wander through in the summer. There were some sightings beginning Aug. 11 near the old Butler tract, then August 13 in the Herrontown Woods area of northeastern Princeton, then other sightings through August 18 down along the Stony Brook. 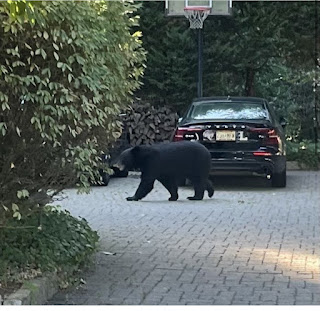 The wisdom of a comic description I've posted in the past detailing how Princetonians should behave when encountering a black bear is confirmed in a recent article by the Town Topics.

Black bears, particularly young males, are motivated to seek out new territory in the summer. One online source describes how young bears stay with their mothers for about 18 months, then are shooed away when the mother receives the persistent interest of an adult male, commencing another cycle of reproduction.

Each bear must establish a home range. Female bears often share their ranges with their female offspring, but the young males must find new territory. That search sometimes includes Princeton. To get a sense of what the young male bears are looking for, Princeton is roughly 18 square miles, which is on the small side for a male bear's home range. Though we have a lot of open space, the habitat isn't enough to sustain a bear. Thus the brief visits in summer.

There is considerable solitude in the 20 plus years of a bear's life. The females have the recurring company of their offspring for 18 months at a stretch, but adult males spend their time alone except for a periodic few days' courtship with a female.