Herein lie a series of mid-summer encounters with nature in Princeton. 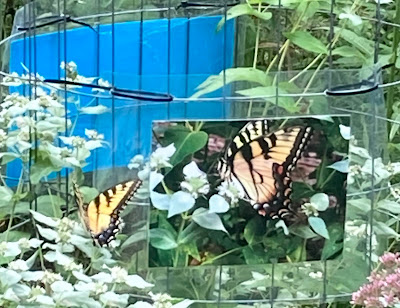 At the Barden in Herrontown Woods, where artistic photos of native plants ring the gazebo, a tiger swallowtail butterfly was caught imitating art imitating nature. Each of the 30 some wire cages harbors a different native wildflower. This one is clustered mountain mint, which is a magnet for pollinators. 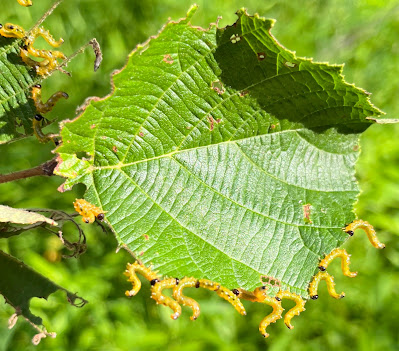 Up near Veblen House, sawfly larvae chowing down on a young hazelnut's leaves adopted an S-shaped balletic pose when disturbed. Imagine everyone in a cafeteria standing up and adopting the same yoga position as you entered. With 9 pairs of prolegs, the sawfly larvae are not true caterpillars, which are defined as having only 6 pairs.

The sawflies' choreographed response is similar to that of a real caterpillar called a contracted Datana seen three years ago on lowbush blueberries also growing at Herrontown Woods. 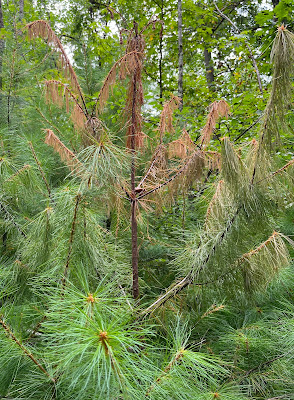 If you see the top of a lovely young eastern white pine suddenly turn brown, chances are that white pine weevils have paid a visit. The adults overwinter in the leaf litter, then emerge in spring. The females lay eggs in the central stem of the white pine, the larvae then eat the inner bark of the pine, cutting off the flow of nutrients to the terminal stem. 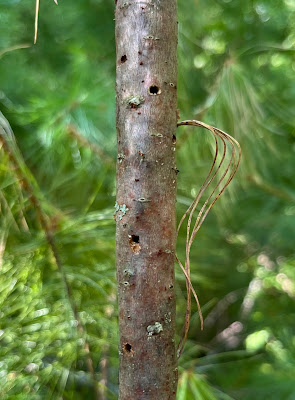 In late July and early August, the adults emerge via small holes in the bark. The weevils are native, and the pine survives by using one of its lateral shoots to continue upward growth. Evidence of past attacks by weevils can be seen in a pine tree's crooked stem. 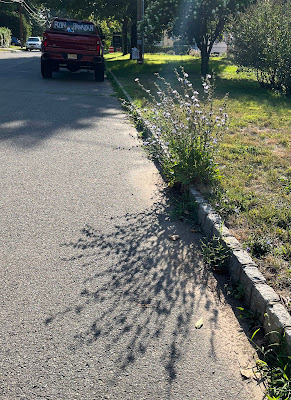 Why is this gangly weed being left to grow in an otherwise groomed suburban lawn? It's a chicory that has worked its way into the heart of the homeowner by fielding an array of attractive flowers through most of the summer. The blooms of the homeowner's frontyard roses and Rose of Sharon shrubs come and go, but the chicory keeps delivering. 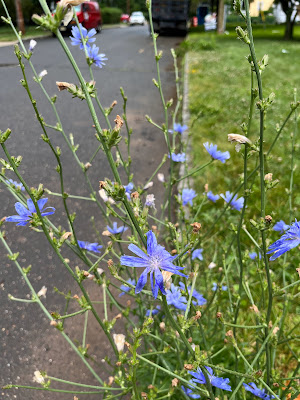 The flowers have a delightful shade of blue that lifts the spirit. There's a fun post about a chicory that grew gloriously out of what looked like pure concrete six years ago at a busy intersection, drawing photographers, including me. 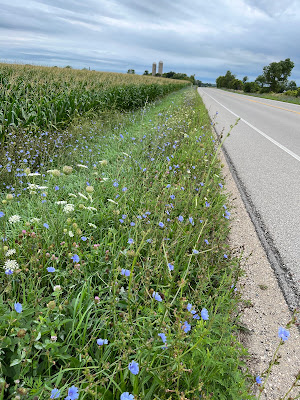 Liking the plant, I'd like to think it "plays well with others", that is, does not become invasive and exclusionary of other plants in the manner of mugwort or Chinese bushclover. But while traveling recently in southern Wisconsin, I did see it thickly established along a lengthy stretch of country road. But a road embankment is an altered soil that often becomes colonized by nonnatives that aren't necessarily invasive in a prairie. 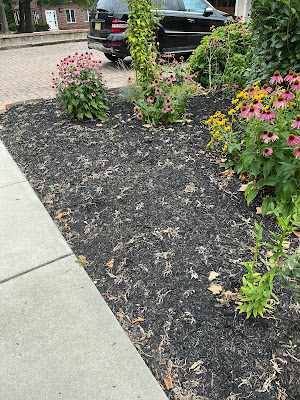 I was impressed to see that this gardener on Valley Road had vanquished the Canada thistle that had pushed up through the mulch earlier in the spring. (See Weeds That Launch an Underground Insurgency.) A garden tells little of the past battles waged to create this gentle scene of coneflowers and black-eyed susans. 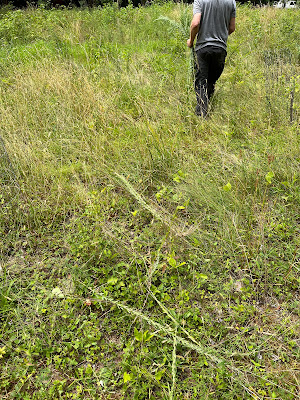 A meadow needs to be weeded like any garden. Sometimes, the process of weeding, by getting us out there, leads to discoveries and a deeper appreciation of the area being weeded. Scott Sillars and I were weeding the meadow next to Veblen House recently, pulling every Chinese bushclover we could find before they could bloom and go to seed, when I discovered a plant not previously known to bloom there. 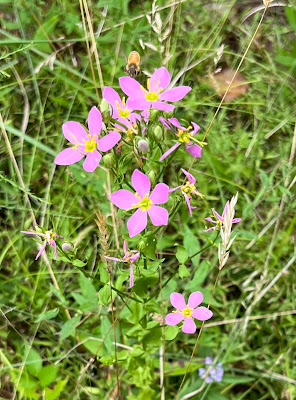 Rose Pink (Sabatia angularis) is a biennial in the gentian family. I had been content to call it Meadow Beauty until I took a closer look and realized it has five petals instead of four. 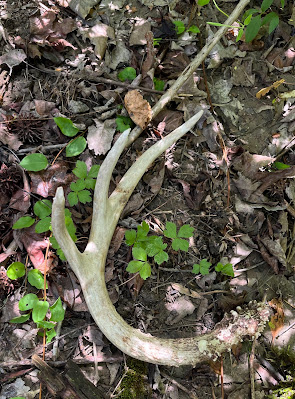 Another small treasure, found while cutting invasive wisteria vines in a thicket of privet shrubs near Veblen House, was an antler. It's said that shed antlers are rarely encountered because their minerals make for good gnawing by mice and other animals. This one, however, was in good shape long after being shed over the winter. 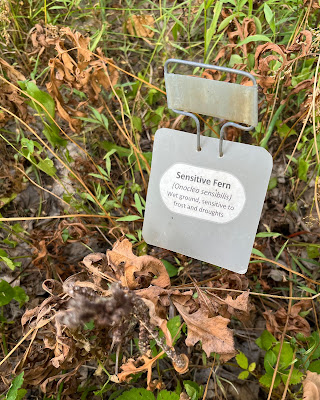 When rains are plentiful, sensitive fern can form robust, expansionist stands that make the name seem a misnomer. But the plant lived up, or down, to its name when this summer's drought turned lush green leaves dry and brittle. 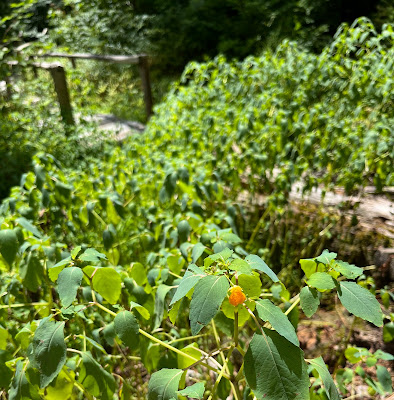 Jewelweed is another example of a native plant that can be robust in wet weather, then get laid low by drought. A couple years ago, there were so scarce in the Barden at Herrontown Woods that we thought of helping them to spread. But the few specimens cast their spring-loaded seeds far and wide, leading to current abundance.
A lot of native wildflowers have "weed" in their common name, despite their positive attributes. Jewelweed is a good example, with its tubular orange flower that attracts hummingbirds, yet its capacity to become prolific can turn it into a weed in our perceptions. 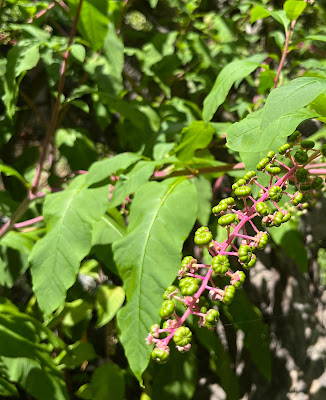 Pokeweed is another native that can overgrow its welcome, looking sometimes elegant, sometimes gangly. More about pokeweed elsewhere on this blog, including its close relative in Argentina that looks like a tree but isn't. 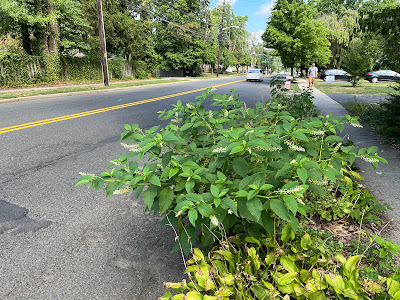 If you like pokeweed but find it gets way too big, you can cut it down in midsummmer, then watch it regrow in a smaller version of itself that might fit the allotted space better. This works with other tall native perennials as well. 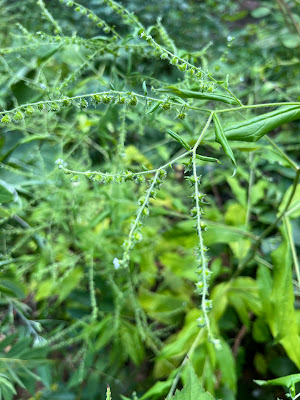 Those who leave Princeton in August are missing out on bur season. If you find your leg covered with burs, it could be that you just walked by some stickweed. 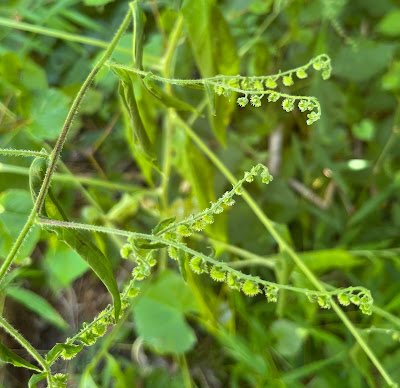 Here's a better photo. It's one of the plants written more about in a post called Deceptive Weeds. 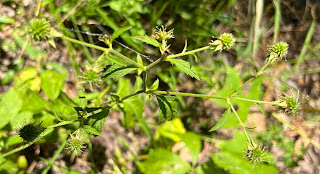 White avens is another weed that produces burs. 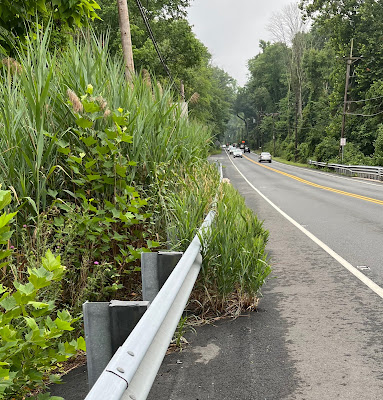 If you get tired of watching paint dry, you can always drive down Route 206 towards Montgomery and watch Phragmitis reed slowly eat the road. 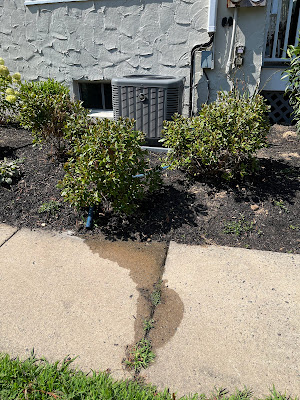 You could also watch the condensate drain away from air conditioning units. Water can be pretty exciting to a gardener in the middle of a drought. Air conditioners pull moisture out of the inside air and release it outdoors. The trick is to take advantage of this water and direct it towards plants that desperately need it during hot, dry days when air conditioners are running the most. 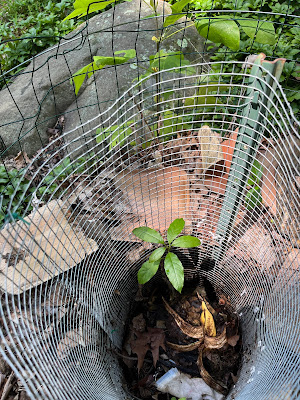 One advantage of composting your food scraps in your yard is the surprise plants that sometimes appear among the moldering banana peels and crushed egg shells. This is a volunteer avocado growing in a Wishing the Earth Well composter. 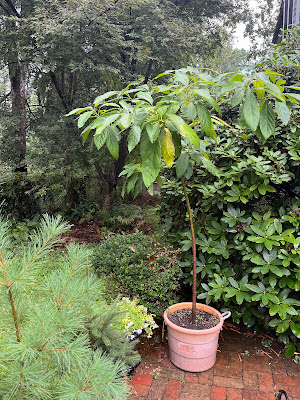 A friend of mine potted up one of his compost pile avocados and it's now almost too big to get out the door after a winter spent indoors. 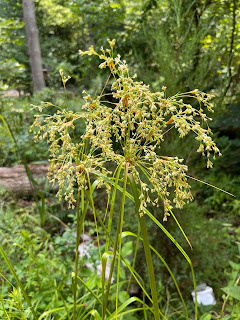 There are a lot of native plants that show their beauty in midsummer when many people are out of town. One favorite of mine is woolgrass, which really should be called brown wool sedge, because it's a sedge, not a grass. You can call it Scirpus cyperinus if you want to sound impressive. Most sedges mature in the cool months of spring, but woodgrass develops more slowly, sending up a tall inflorescence that is attractive at all stages on its way to looking wooly. 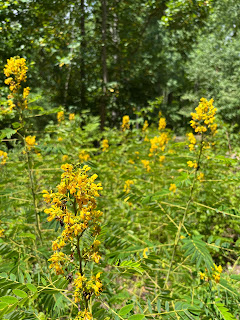 It's been a great year for wild senna, a legume that folds up its leaves at night. 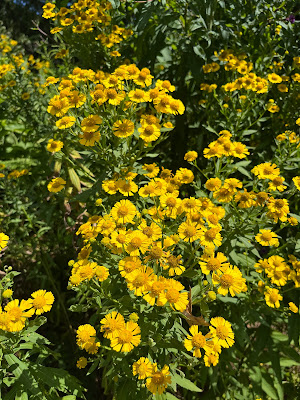 When many of the midsummer native wildflowers are looking spent, autumn Helenium unveils an array of attractive yellow flowers.
Posted by Steve Hiltner at Friday, August 26, 2022