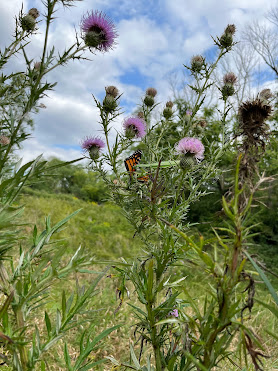 The opening was enlivened by thistles in full bloom, probably native field thistles, if the whitish underside of the leaves is indicative. And adorning the thistles were multiple monarch butterflies, fluttering as they drank from the flowers. 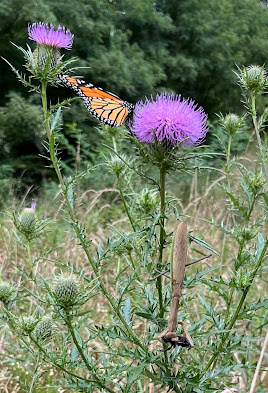 It had been years since I'd encountered a native thistle, and I hadn't seen a monarch in several weeks, so to see both together in numbers lifted the spirit. But the idyllic scene developed some disturbing undertones upon taking a closer look.
There, down the stalk of the flower a little ways, something brown. Do you see it? A big praying mantis, of which there were several. I've long wondered if they could be one reason the monarchs are declining in numbers. 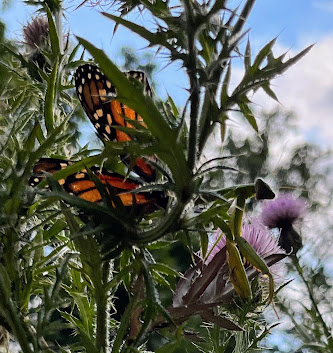 The answer came quickly. A pair of monarch wings weren't moving, and there, sticking its head out, next to the lifeless remains was one of the praying mantises. 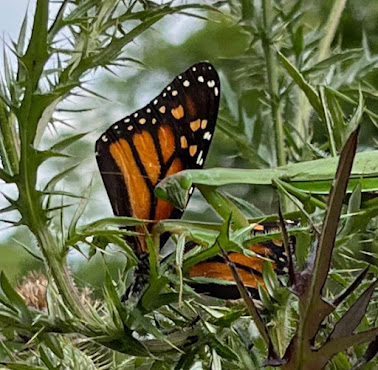 Here's a clearer angle.
The Intermixing of Good and Bad
My interest in plants began with organic gardening. When growing food is the objective, praise goes to rich soil and natural predators that eat insect pests. Once my interest turned to native diversity, however, my view of what was good began to change. I noticed that poor soil often harbored richly diverse native plant communities. Too many nutrients could be detrimental. And those natural predators that were keeping pests at bay? Well, the praying mantises we most commonly see are not natural, but were instead imported from China.
Note: A National Geographic article explores how the praying mantis avoids being poisoned by the toxins in monarch butterflies. 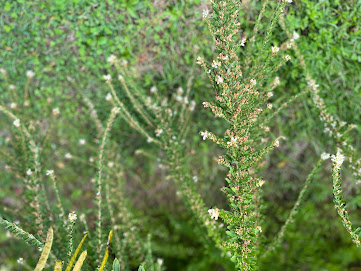 All around the thistles was another invasive, Chinese bushclover, also known as sericea lespedeza or Lespedeza cuneata. I know it well from my years in North Carolina, where it was planted by the Dept. of Transportation as a supposedly good thing, to reduce soil erosion on newly carved road embankments. Proponents claimed its seeds would be a boon for wildlife. It has since become a major invasive pest in grasslands, replacing diverse native species with an inedible monoculture. And the seeds? Reportedly they are too small and pass through the guts of wildlife unutilized. 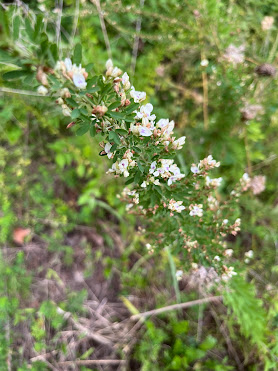 Its white flowers distinguish it from natives like slender bush clover (Lespedeza virginica), which has pink flowers and is rarely encountered. 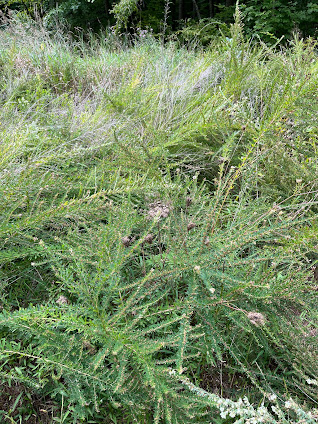 Chinese bushclover is a relatively new invasive in Princeton, but I've seen elsewhere what it can do, and it's only a matter of time before it forms monocultures to rival mugwort. There might have been a time when I would have praised it for its tough roots that hold the soil in place. Being a legume, it has the capacity to fix nitrogen from the atmosphere, enriching the soil. But no herbivore has come forward to limit its rampancy. From a plant diversity perspective, it is a disaster.
The knowledge that all is not well in the world does not negate the delight in beautiful thistle blossoms and a clustering of monarchs. It just heightens the sense of positive and negative intertwined all around us.
Posted by Steve Hiltner at Monday, September 19, 2022