Late August and early September mark the last opportunity to pull Japanese stiltgrass before it goes to seed. An annual grass that was introduced from Asia, and which wildlife show no interest in eating, stiltgrass has taken over large swaths of the forest understory in Princeton, as well as many yards.  We called it bamboo grass when we first noticed it in the 1990s, back when I was living in the piedmont of North Carolina. It was also called packing grass, because it had in the past been used to pack porcelain coming from Asia. That's probably how it got a foothold in the U.S. 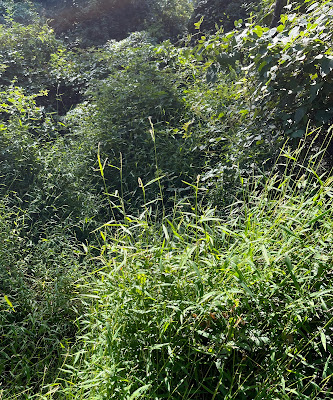 The stiltgrass name fits when it extends it seedheads this time of year, appearing to climb up and over other vegetation, as if on stilts. Height tends to be around 2-4 feet, though it can even spread into lawns and somehow survive and reproduce as a miniature version a few inches high. 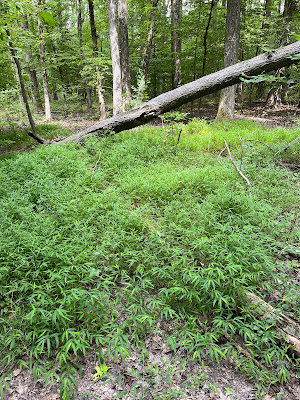 In late summer in the forest, it looks like this, ready to flower, bear abundant seed, then die. This is actually one of the smaller patches. In some invaded areas, stiltgrass extends through the forest as far as the eye can see. 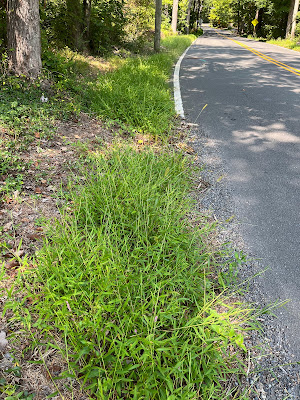 In late summer, stiltgrass can form monocultures along wooded roadsides, thriving on the extra runoff from the pavement.

Many people assume that since stiltgrass is so widespread, nothing can be done other than to wait a few hundred or thousand years for something to evolve to prey upon it and bring its numbers into balance with all the other kinds of plants currently drowning beneath this inedible green wave of supergrowth.

But there are many areas of Princeton where stiltgrass is just beginning to invade. Many yards still don't have it, or have small enough amounts to pull. Being an annual with weak roots, it is very easy to pull, and satisfying progress can be made if you have a small patch or many hands.

My strategy is to pick my spots, preferably pull it by late August, before it begins to flower, and just leave it on the ground to dry out. But even in September it can be pulled before the seeds begin to fall off. If it is already blooming and forming seeds, then either bag the pullings for the trash or, if you don't want to add to the landfill, pile it in one spot where any seedlings next year will be concentrated and easily dealt with.

We have made considerable progress in diminishing its presence at the Botanical Art Garden in Herrontown Woods, simply through persistent pulling to markedly reduce the production of seed.

A friend at the NC Botanical Garden has found that large patches of stiltgrass can be treated effectively, before seed production, with a very dilute (0.5 %) solution of herbicide. Annual plants don't invest much in roots, and stiltgrass's weak root structure makes it more susceptible to systemic herbicide than perennial plants that may be interspersed. 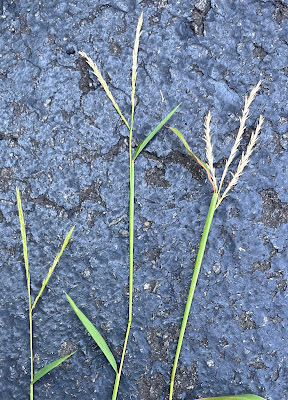 Here's what it looks like when it's going to seed. Stiltgrass seedheads look a bit like crabgrass, which is also an introduced annual that gets a late start in the spring and then seeds in late summer. What makes stiltgrass an aggressive invader of woodlands is its capacity to thrive both in sun and shade. 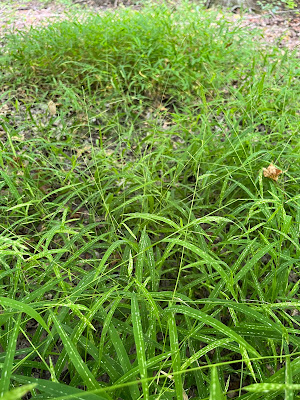 On a recent walk along the Princeton ridge in Herrontown Woods, I found stiltgrass fairly early in its invasion, just beginning to form sizable patches.  Interspersed was a native grass with similar appearance--Virginia cutgrass--and it's interesting to note that the native grass, while common, does not form the large, exclusionary patches that the introduced species does. 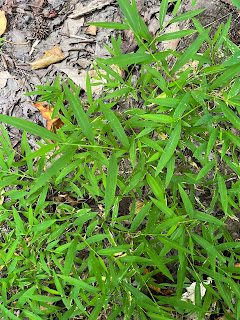 It's a challenge to tell the two apart. Most homeowner's yards won't have the native Virginia cutgrass, but it's interesting to compare. Here is Japanese stiltgrass, which also goes by the latin name Microstegium vimineum. 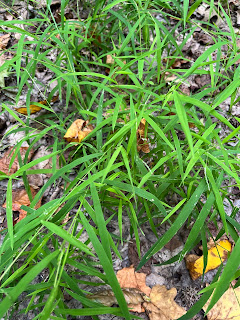 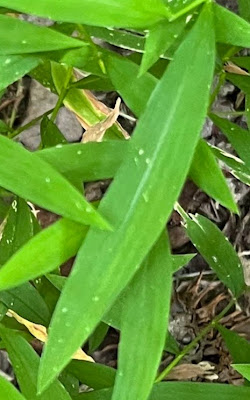 Stiltgrass leaves often have a stripe down the middle. 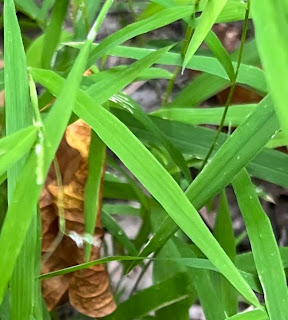 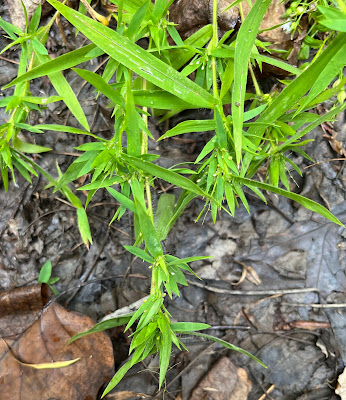 Once you start taking a closer look at the grasses along the ridge, you may notice the subtle differences between one species and another. Here's a native grass that I haven't learned the name of as yet. You can see that it has dense clusters of short leaves, in contrast to the others. 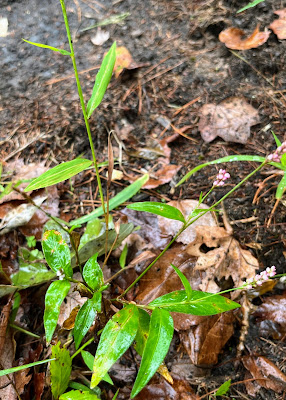 A look-alike homeowners are more likely to see is a nonnative smartweed called "lady's thumb," which has a cluster of pink flowers at the end. This photo shows lady's thumb at the bottom and stiltgrass growing up and to the left. Both are easy to pull.
Previous post on this subject: Stiltgrass's Annual Trillion Seed Initiative.
Posted by Steve Hiltner at Sunday, September 11, 2022