Encounters with nature and sustainability around Princeton in September. 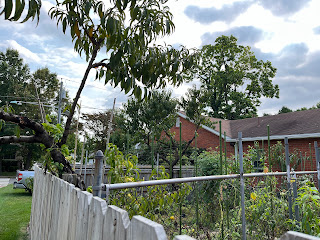 One of my favorite corners in Princeton is near the middle school, at Guyot and Ewing. It's a small enclave, a triangle of sense, where the yards and the roofs of houses actually perform work, growing food and gathering energy. On one side is a small house with a small yard that the owner has turned into an orchard and vineyard, as might be more often encountered in Italy. 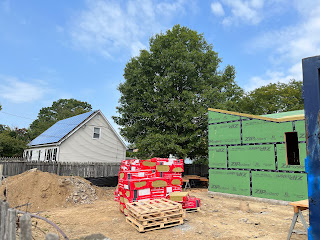 Nearby is a house whose south-facing roof has been completely covered with solar panels for 20 years.
When a house was torn down recently at the corner, I feared it would be replaced with something huge and unattractive, 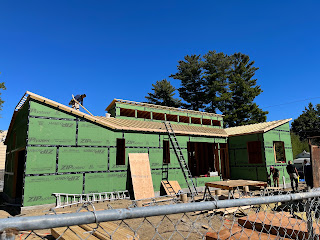 but instead, a one-story house with extra thick insulated walls and solar panels and interesting design is taking form. It was a real surprise to see a one-story house being replaced with another one-story house that is sensitive to the history of the site and seeking to fit in, while showing off a modern design that seeks to minimize energy consumption. 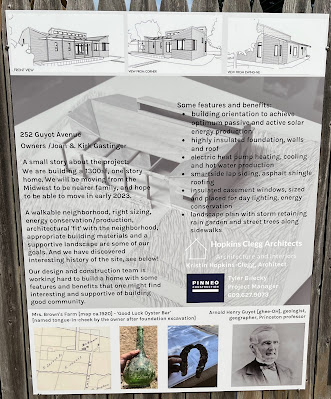 They even have a sign on the fence describing the project and what was there back in Princeton's agrarian era. 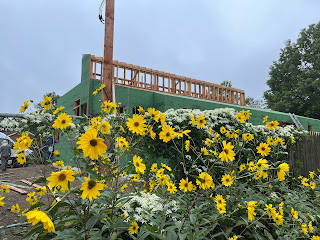 Blooming along the fenceline next to the house are sunflowers and autumn clematis vine. Gorgeous as they are, thankfully generating color at a time when most flowers are spent, they are best not planted in a garden unless where the spread of their roots is limited by a house or pavement. Otherwise, given abundant sun to power their aggressively spreading roots, they will take over your garden. 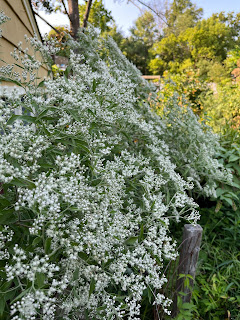 Another common encounter in September is with late-flowering thoroughwort, which spreads not by roots but by seed. It can be weedy but also lovely and even elegant at times, and is great for pollinators. I couldn't get myself to pull this one out in our backyard, even though it has completely taken over a garden path. 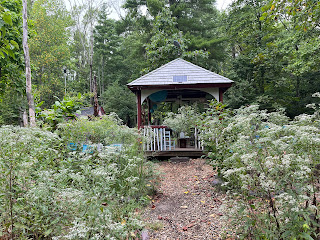 At the Barden in Herrontown Woods, they are so plentiful that we don't feel too bad pulling out the ones that lean over the pathways. 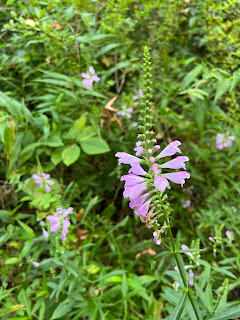 The fight against invasive species has the side benefit of taking me to areas of a nature preserve where I wouldn't otherwise go. Recently, it led me to a patch of native diversity in Herrotown Woods that I hadn't noticed before.
Here is obedient plant, 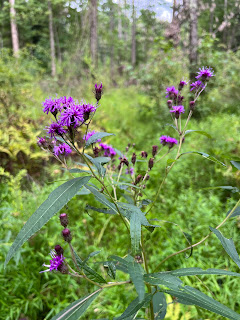 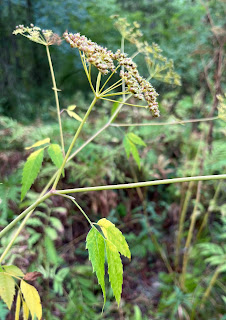 and the post-flowering look of water hemlock. 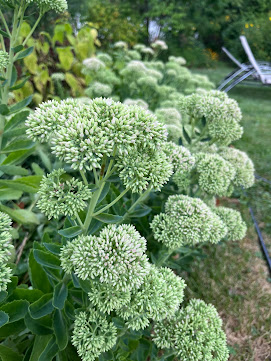 One of my favorite garden plants this time of year is stonecrop "Autumn Joy." 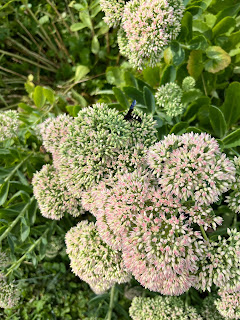 A sedum, its disks of flowers go through a gradual enrichment of color from green to pink to deepening shades of red, then finally chocolate. Nonnative but noninvasive, it has the added benefit of being popular with pollinators. 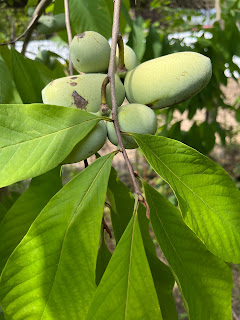 Pawpaw trees are becoming more common in Princeton. The patches planted in Herrontown Woods have yet to bear, but this one in my backyard reflects a growing interest in this unusual species native to the north yet with a tropical taste. 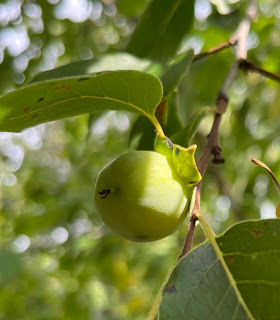 Native persimmons, likely once common in Princeton but often shaded out by larger trees in recent decades, are an attractive smaller tree that might actually bear edible fruit if you happen to get a female and harvest it just at the right time. 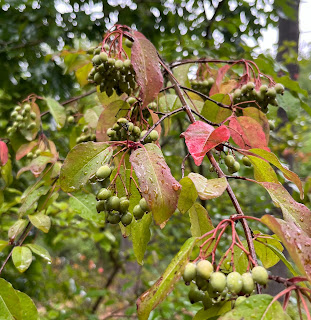 If the drought hasn't made the berries too dry, these blackhaw berries could make for some good picking after they darken. Blackhaw viburnum, Viburnum prunifolium, is the most common native viburnum in our woodlands. 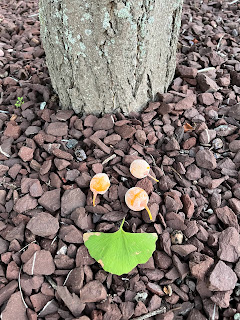 Less generating of anticipation are the fruits of a female ginkgo tree, encountered growing near the Princeton Junction train station. The fruits have such an unappealing smell that people try to avoid planting female trees. 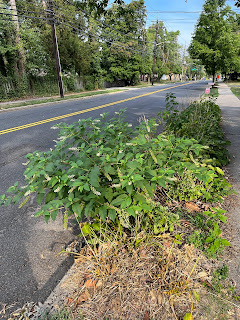 Among inedible fruits, I call this the incredible shrinking pokeweed, because it initially grew to be seven feet tall--way too big to grow along a busy street. So I cut it down midsummer and thought that was that, only to have it sprout back as a smaller version of itself. You could try this technique with a number of perennial native wildflowers that get too tall for people's taste. Cut them down partway through the summer, then let them grow back in a miniature form.
Though it dies down to the ground each year like a perennial wildflower, pokeweed looks more like a miniature tree, and in fact it has a close relative in Argentina. The ombu grows to the size of a large tree, yet lacks xylem. 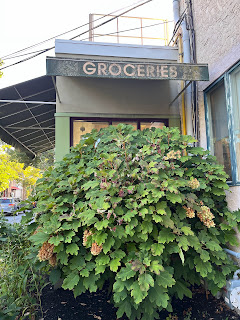 This shrub, too, needs to be cut back. It's an oak-leafed hydrangea I planted long ago in a little raingarden at the front of the Whole Earth Center. The landlord the store leases from must have a new landscape firm taking care of the grounds, because I stopped by recently to find that my native shrubs have been trimmed to look like bowling balls. Funny to see a native shrub and wildflower planting getting the bowling ball treatment. I'll have to take some loppers to restore light to the window next time I stop by to buy some beets or delicious bread. 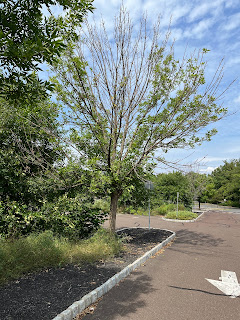 Sometimes, frequently in fact, I find myself wishing I wasn't right. Take this ash tree for instance, planted by the people who landscaped the new parking lot that Westminster Choir College built about ten years ago. I told them they needed to remove the ash trees they had just planted. The emerald ash borers are coming, and the trees won't survive. They left the trees in. The trees survived longer than I expected, but are finally succumbing.
Actually, if you were trying to make Princeton sustainable, you might want to "farm" Princeton with smaller, short-lived trees that provide shade but are less expensive to take down. The above ground portions could be periodically harvested as a local energy source, and the roots left in the ground would sequester carbon. Trees are a source of solar energy, since they draw their carbon not from underground but from the atmosphere all around them. Thus, no net increase in atmospheric carbon from their combustion. 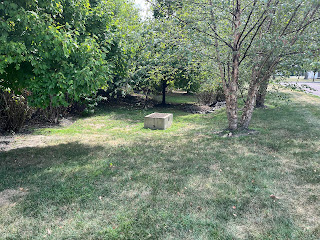 The landscaping for the parking lot also called for a raingarden to be planted here in this hollow. After being planted, the young river birch trees soon began to wither for lack of water. I assumed they would die, and that the raingarden would be poorly maintained and ultimately be mowed down. I was only half right. The river birch trees survived. 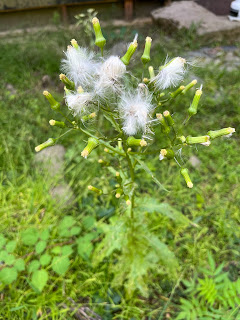 Here's what looks like a bright white flower that isn't. The white is the puffy seeds that give the plant its name. The flower seems not to open but remain in what looks like a bud stage. It's pilewort, a native weed that can reach seven feet tall.
Finally, a grass encountered in fields and local rights of way. When its flowers open and display their golden anthers, this native member of the tallgrass prairies can be eye-catching. Indian grass, Sorghastrum nutans, reminds me of the midwest prairies I used to help manage, and a time long ago when prairie openings were common in the east as well. 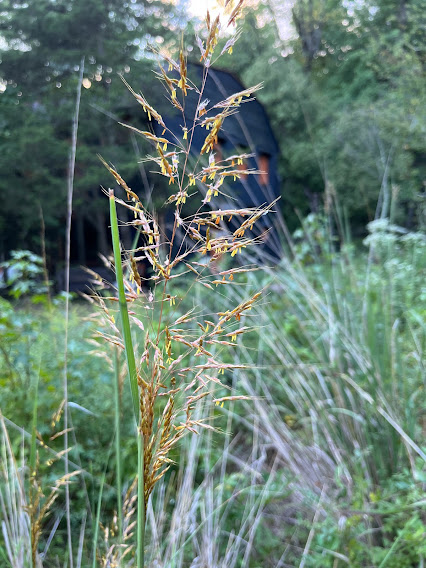