Each time I see a native arrowwood Viburnum growing in the woods, I take a closer look. There's a viburnum leaf beetle--a nonnative species introduced from Europe--that showed up in Princeton about a decade ago. On a visit to Pittsburgh years back, I saw native Viburnums totally skeletonized by the insect, and worried about the fate of our own Viburnums in NJ. 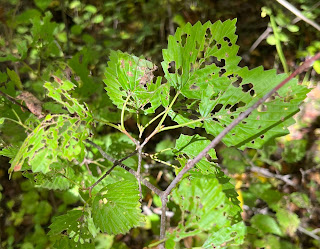 I've posted about this insect pest in the past. Suffice it here to say that among the various species of Viburnum in NJ, the arrowwood Viburnum (V. dentatum) is the most vulnerable. The nightmare scenario would be for the leaf beetle to defoliate all arrowwood Viburnums, then move on to decimate the next most vulnerable species.
Preferring wet ground, blooming profusely even in the shade, the Viburnum dentatum is not as common in the woods as the blackhaw Viburnum, or the highly invasive Linden Viburnum. The last couple years, I didn't notice much insect damage. This year, observations are mixed. Some shrubs in Herrontown Woods were badly eaten, 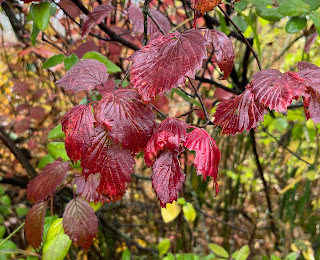 while an arrowwood across town in Rogers Refuge showed no damage at all.
Hopefully, the total stripping of leaves that I witnessed in Pittsburgh will prove to have been an exception, and natural predators and diseases will keep the Viburnum leaf beetle in check. Worth keeping an eye on in coming years.
Posted by Steve Hiltner at Friday, November 11, 2022