Nature at the Princeton Battlefield 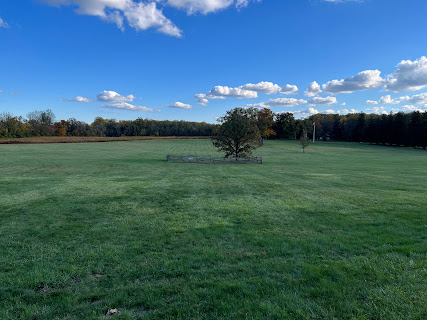 As a lover of both nature and history, I experience the Princeton Battlefield differently than most. There's gratitude for its preservation, along with some grieving for the way the land is managed. Nature here is pushed to the fringes, as if to replicate a giant ballfield where contestants once showed up to play a spirited game of cannonball. But the battle took place on a working farm, not an athletic field.
The Clark House has been restored, its 18th century charms highly valued. So why is the landscape being managed to look like 20th century suburban? In the winter of 1777, the soldiers would have been treading through corn stubble, or pasture, or an orchard.
As I walk across the field, I feel a sense of space more than place. Perhaps if I tried I could feel grandeur, or solemnity. Graveyards are mowed, after all. A big sky and a big field help us to understand that something big happened here, when a nation was being born, its future stretching far off towards the horizon. Maybe the landscape works in some spiritual way to evoke freedom and possibility. But as I walk these hallowed grounds, I'm also feeling a sense of a long ways to go before reaching anything interesting. Okay. Perhaps that long trudge could generate some appreciation for the long overnight march of Washington's amateur army from Trenton to Princeton. 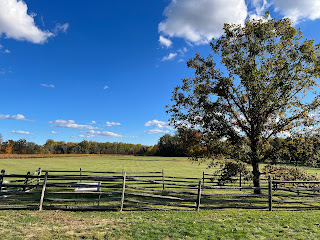 One tree stands in the middle of the giant lawn, an offspring of the great Mercer Oak that had witnessed the battle and lived through two more centuries before falling to a windstorm in 2000. Trees growing at the time of a great battle are called witness trees. The soldiers who fought that pivotal battle are long gone, but centuries later a tree, especially the long-lived white oak, could still claim "I was there!"
The offspring was donated by Louise Morse, spouse of Marston Morse, a mathematician who Oswald Veblen helped bring to the nearby Institute for Advanced Study in the 1930s. It was Veblen's initiative to acquire the 600+ acres behind the Battlefield that later became the Institute Woods. 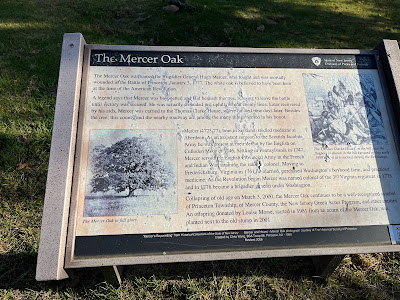 The sign tells the story of the white oak and General Mercer. What I've come to look at, though, is not the highly symbolic tree but a thin sliver of golden brown in the distance. 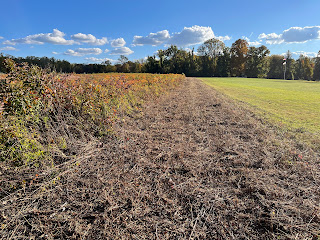 Beyond the lawn, towards the back of the Battlefield, is a meadow that is mowed once a year. For some reason they mowed the edge of it this fall but have left the rest, perhaps as winter cover for wildlife. 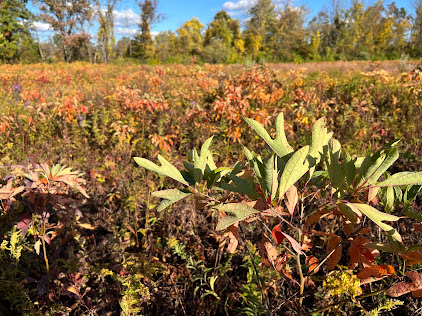 Taking a closer look, I'm surprised to see that, among the blackberries and prairie grasses, goldenrods and asters, are myriad sassafras sprouts, most of them bright orange this time of year. The meadow is a giant clone of sassafras--one root system with ten thousand heads. Can't say I've ever seen that before. 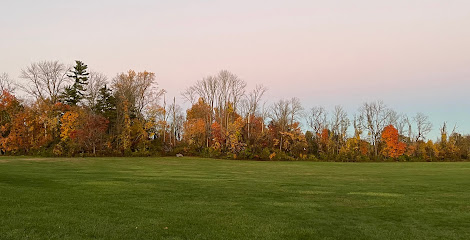 To the left of the field is a bedraggled woods, dominated by the skeletons of ash trees killed by the introduced Emerald ash borer. A heroic American tree species silently meets its demise.
Behind the Clark House, and also across Mercer Street to the left of the pillars, more signs of introduced invasive species abound. Rampant invasive porcelainberry is stifling the 1976 bicentennial plantings--flowering dogwoods and daffodils around the edge of the field. As is typical of the landscapes we daily tread, the Princeton Battlefield invests in mowing the grass, while leaving the unmowed areas untended and overrun. Each year the Sierra Club organizes a spirited volunteer day to battle against bamboo near the Clark House. In the past, I would lead a group to cut the aggressive porcelainberry vines off of the bicentennial flowering dogwoods, but it's hard to make lasting progress when unsupported by the state agency that views grounds maintenance of this state park as "mow and go." Now all I do is make annual visits to snuff out a small infestation of mile-a-minute I spotted some years back on the Battlefield grounds.
Surely the soldiers who fought here knew their plants better than most people do today, and would feel disoriented by today's massive lawn surrounded by alien weeds. If I were to envision a battlefield landscape that sought to provide a more historically authentic botanical and horticultural context, I'd imagine some portion of the massive lawn being given over to the sort of landscape the battle was actually fought upon--pasture, orchard, corn field, whatever research shows to have been likely at the time. Along the edges would be native forest rather than tangles of kudzu-like nonnative vines.
According to its mission statement, the Princeton Battlefield Society seeks to "restore the lands and cultural landscape." Maybe once other admirable goals are achieved, someone in the group will get interested in showing people an authentic 1777 landscape, and get the state parks department to help in the effort.
To acquire, protect, preserve, and restore
the lands and cultural landscape related
to the Battle of Princeton of 1777;
To enlarge and improve the
Princeton Battlefield State Park;
To educate the public about the Battle
of Princeton, the Ten Crucial Days,
and the American Revolution.
Posted by Steve Hiltner at Friday, November 11, 2022