Earlier this fall, I was passing by Princeton High School on Walnut Street when I saw something I'd never seen before: 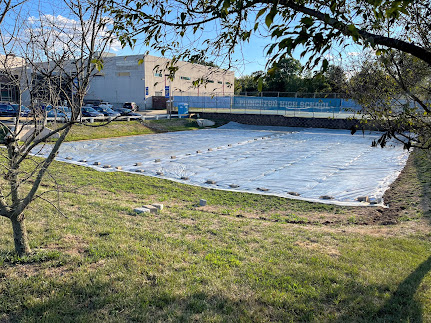 a whole field covered with plastic. The field, next to the tennis courts and a parking lot, is actually a stormwater detention basin that the school wants to replant as native meadow. But before planting, they need to kill the existing turfgrass.
I had contacted the schoolboard members on the Operations committee a number of times over the past year, promoting the meadow idea and encouraged them to contact a federal agency called Partners for Fish and Wildlife. Over the years, I had worked with Partners to convert, at no cost, a number of detention basins in town to native meadow--at Farmview Fields, Smoyer Park, Greenway Meadows, and even at the Princeton High School ecolab just down Walnut Street.
Instead, the school hired at some expense an outside contractor to do the conversion. The plastic is probably a very plasticky attempt to avoid the use of herbicide. If you place clear plastic over grass, the heat from the sun gets trapped under the plastic. Like a greenhouse, or the earth's atmosphere, or the windows of a car parked in the summer sun, the clear plastic is transparent for light but opaque for heat. The sunlight travels through the plastic, hits the ground, turns into heat, and the plastic keeps the heat from escaping. Trapping solar heat to kill the grass is called solarization. I had accidentally done something similar when I laid a vinyl floormat on the grass next to the curb in the hopes someone else would find it useful. No one took it, and the grass under the mat was killed, leaving a brown spot for the rest of the summer. 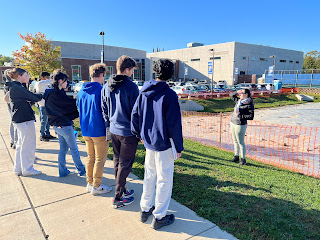 This PHS environmental science teacher is one of several using this detention basin as well as the ecolab to teach about stormwater issues and habitats. 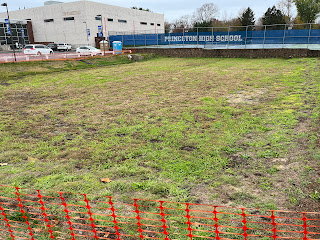 Unfortunately, the plastic was installed late in the summer, as the sun's power was waning. When the plastic was removed this week, the results were less than impressive. A deep-rooted weed called plantain remains particularly abundant.
It would be interesting to find out why herbicides were not used. The school may well have banned the use of herbicides when school is in session, but that doesn't preclude the use after hours or on weekends. Herbicides get a bad reputation for being heavily used to impose sterile lawns in suburbia, or on farms to eliminate every last weed, including milkweed. But they can also be used, in a targeted, minimalist, medicinal way, to kill invasive weeds that would otherwise be too difficult to control physically. We manage toxicity in our own bodies, taking only enough medicine to achieve a beneficial effect. Banning herbicides brings the comfort of absolutism, and makes people feel they're being green, all the while handicapping those who are actually doing the work to restore native diversity to the landscape.
We'll see how the project goes. Not sure what happened to all of that plastic.
Posted by Steve Hiltner at Saturday, November 12, 2022