An endearing feature of trees is their affection for the ground. People hug trees now and then, but trees spend their whole lives hugging the earth. Like humans, trees lust for the sky, but unlike humans they know that quest requires a good foundation, and find ways to hold on tight. Here are some of the more demonstrative embraces seen during a recent visit to Coconut Grove, Florida. All except the first were seen at Fairchild Tropical Botanical Garden. 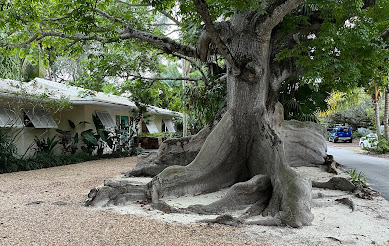 Root flare is a sign of health in trees, but I'd never seen the likes of this. I'm calling it a kapok tree (Ceiba pentandra) after encountering this charming video that describes its buttressed base and the fluffy seeds that used to provide stuffing for life vests. 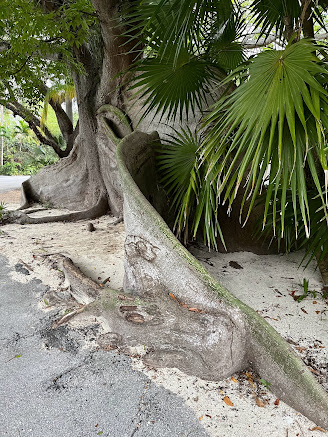 The extravagant buttressing is reminiscent of the fins of a rocket that in this case can reach more than 200 feet tall, vaulting above the rainforest canopy. With seedpods packed with useful fiber, it's not surprising that the kapok is in the same plant family as cotton--the Malvaceae, also known as the mallow family.
One of Princeton's native members of that family is the rose mallow hibiscus (Hibiscus moscheutos), fairly common along the shores of Lake Carnegie and in raingardens. 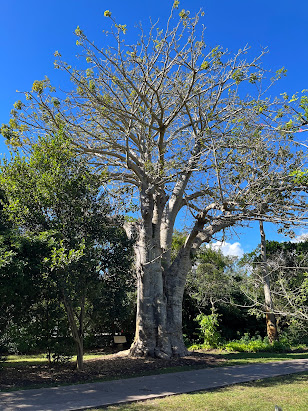 Another fabulously grounded tree in the mallow family is the baobab (Adansonia). I'd love to explore the meanings and uses of this iconic tree in the African landscape, but right now I'm wondering, as droughts are being radicalized by an altered climate, what is happening to trees like the baobab that have lived to be thousands of years old. The wikipedia entry for baobabs is a wee bit alarming in this regard. 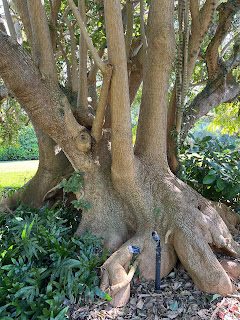 The ombu, a native to the Argentine pampas that goes by the latin name Phytolacca dioica, develops a conspicuously bloated base that with time can become convenient for sitting. If you haven't seen one, just imagine a 50 foot high pokeweed--our local Phytolacca americana with very similar leaves, flowers, and berries. 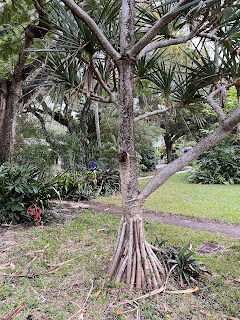 I was impressed by this tree's buttressing, 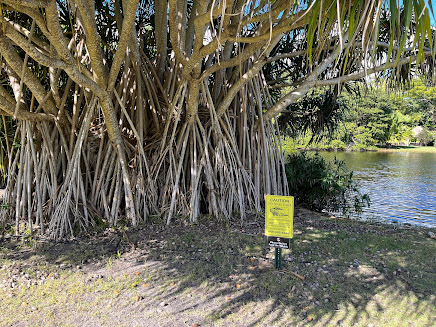 and even more impressed with this larger specimen. 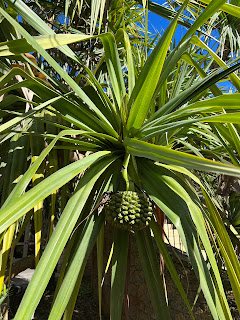 With leaves like that, I was sure it was some sort of yucca, but no. The iNaturalist app called "Seek", my new botanical companion for the trip, called it Pandanus tectorius, a kind of screw pine. With those mangrove-like roots, it's not surprising that screw pines grow along coasts and are wind and salt resistant. 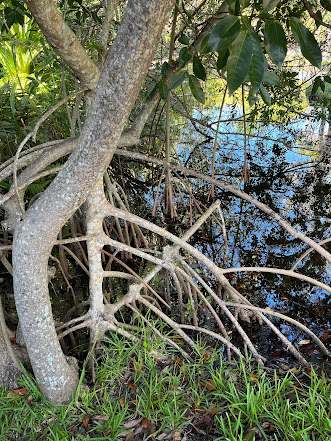 Native mangroves have similar adaptations. Though they have lost a lot of territory, as development has transformed the Florida coast, this one still finds some ground to hold onto. 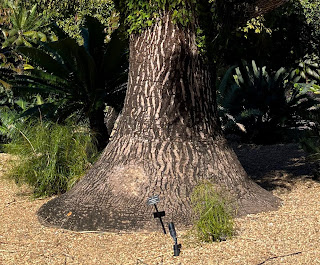 Had to look at the plant marker for this tree with a bloated base. Surprise! It's the ponytail palm--the same species we have growing in our living room in Princeton. 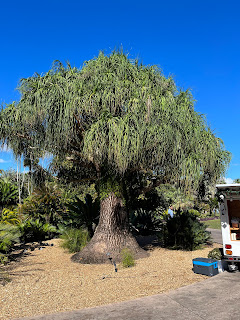 Another name for ponytail palm is elephant's foot. 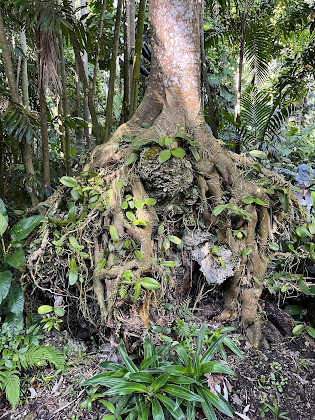 This tree's swollen base is the boulder that it is growing on.
Back in Princeton, at the Barden in Herrontown Woods, a white pine shows some flare for root flare. 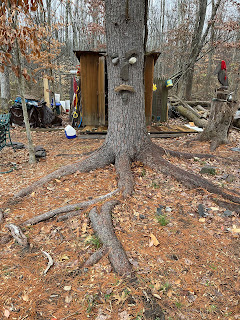