What Privet is This? Border Privet in Princeton

A botanist friend of mine, John L. Clark, asked one day if I knew which kind of privet we have here in central New Jersey. John's extremely knowledgeable about flora of farflung places like Equador, but he has some charming gaps in knowledge of local flora that I can sometimes help with. Though I knew there were different kinds of privet--European, Chinese, Japanese--I had long been content to just call any thick infestation of the shrub by the general name of privet, and think no further. All the species of privet are nonnative and invasive, so for management purposes, it's not necessary to know one kind from another. 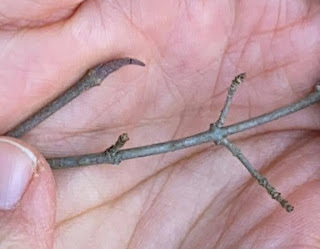 More important for management is to be able to distinguish the non-native privet from native shrubs with similar appearance, particularly the native blackhaw Viburnum. Both have opposite branching, but privet often has a terminal cluster of small black berries that linger through the winter. And many of the privet leaves linger through winter as well.
The photo shows the difference in the shape of the buds. The longer bud on the top (curved here, but sometimes straight) is blackhaw Viburnum. The stubby, grayish buds on the twig below are privet. 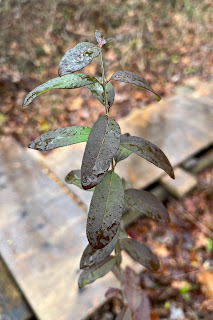 Sometimes privet's winter leaves can take on various shades of green, sometimes bordering on purple or brown.
I was glad John persisted in his quest to find out which privet we have in central NJ. Having lived in the south, he at first assumed we have Chinese privet (Ligustrum sinense), but after posting a closeup of the flower on iNaturalist, he soon learned that we have Ligustrum obtusifolium, latin for border privet. 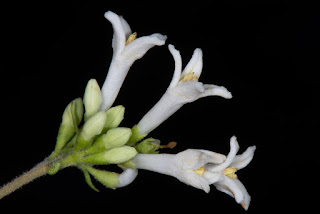 Posting another closeup, John pointed out various identifying characters of border privet: "Corolla tubular with small lobes (the tube longer than the lobes), Shoots pubescent (i.e., NOT glabrous)"
The Penn State post describes "a gradient of four different species: border (L. obtusifolium), common (L. vulgare), Japanese (L. japonicum), and Chinese (L. sinense)." But John has determined that we only have border privet here, probably because it is the most cold-hardy. When I lived in North Carolina, we had a mix of Japanese and Chinese, with the Japanese having much larger and glossier leaves.
Thanks to Inge Regan and John Clark for these photos. Winter, by the way, is a great time to go after infestations of privet in the backyard or local woodlands. Come by Herrontown Woods on Sunday mornings after 10:30am and you'll likely see the Invasive Species of the Month Club clearing swaths of privet to make room for native species.
Posted by Steve Hiltner at Monday, January 09, 2023