For the past two years, Princeton Echo has started the new year with a feature article about a local nature preserve. Last year, it was Herrontown Woods, and this year, Rebekah Shroeder wrote an extended portrait of the birding mecca Rogers Refuge and the volunteers who have cared for it since the 1960s. 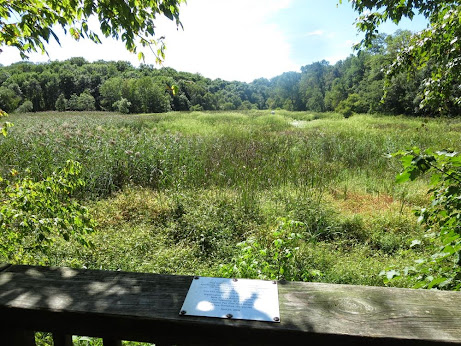 The Charles H. Rogers Wildlife Refuge is a hidden gem, a covert part of Princeton's beauty and ecological richness, accessed down an often passed but seldom seen gravel road called West Drive. Climb the observation tower just in from the parking lot and you will see a most unlikely vista for Princeton--a grand marsh. 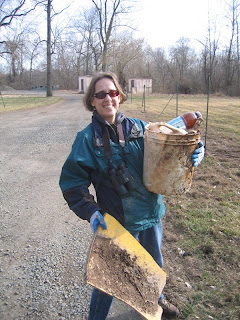 Since joining the Friends of Rogers Refuge (FORR) nearly 20 years ago, I've gotten to know the many volunteers featured in the Echo article.
The article draws primarily from an interview with Winnie Spar, an avid birder, poet, and FORR stalwart.
Charles Rogers and Tom Southerland were the environmental activists who first called for protection for the wetland back in 1968. Tom Poole was another early advocate. Winnie's husband Fred Spar led the group beginning in 2005. Laurie Larson has been a longtime member who created and maintains the website, rogersrefuge.org. Lee and Melinda Varian provided critical leadership after Fred Spar passed away, and most recently, David Padulo has taken the helm.
Important support, particularly for fighting the invasive Phragmitis, has come from the Washington Crossing Audubon and Partners for Fish and Wildlife. Winding through land owned by the American Water Company, the Refuge's trails are kept open by volunteers. The town of Princeton helps out, particularly with maintenance of the pump that augments the water naturally flowing into the marsh from the Institute Woods. The town also funds deer culling that has allowed native habitat to rebound. For my part, I was commissioned back in 2006 to write an Ecological Assessment and Stewardship Plan for the refuge. That assessment includes a detailed plant inventory. Mark Manning and his son recently conducted an inventory of dragonflies and damselflies, and the extraordinary list of bird sightings continues to grow. The article also mentions Betty Horn's work to maintain the University's Rogers Bird Room, and an online exhibit called Capturing Feathers: A Digital Collection of Bird Imagery.
Congratulations to the Friends of Rogers Refuge on getting well-deserved recognition in the Princeton Echo. The article will reportedly also appear in U.S. 1.
Past blog posts about the Refuge can be found by putting the word "rogers" in the search box of this blog. Some examples:
A virtual nature walk at Rogers Refuge
The Spar family cleaning out birdhouses
Wild Rice at Rogers Refuge
Dedication of bird observation towers in 2009
Spring peepers and wood frogs singing at Rogers Refuge
A birdwalk at Rogers Refuge
Tom Poole and early advocacy for limiting Princeton's deer numbers
Posted by Steve Hiltner at Sunday, January 08, 2023