How To Kill Bamboo, Phase 3 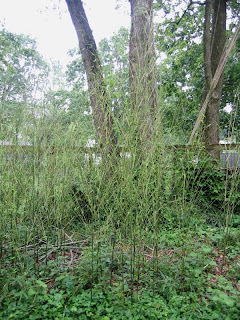 One of the chief activities, perhaps the primary activity, of any avid plant lover and gardener is to kill plants--specifically those which are clearly determined to overwhelm the plants you love. Most people politely call it weeding.

One of the greatest weeds of all has been moving into my yard from the rental next door. The landlord tried to get rid of it, but gave up. Last year, I decided to take it on, sharpened my sword (loppers), donned my armor, picked my moment and charged. Phase 1 was to cut every last stem at its base. The bamboo played dead for a week, then sent multitudinous shoots rocketing up into the air. Rather than rush in with more loppering, I sat back and waited while the beast spent its energy on stems. Then, as the ten foot high stems began to send out leaves that could fuel the serpent's roots, I moved in with my loppers and again cut every last one down to the ground. The bamboo attempted no more grand growth before winter.

This spring, however, it has again sent an army of shoots into the air, and again I waited as it invested in infrastructure. Then, just as it began to unveil its solar panels to draw energy from the sun (see photo), I cut the shoots at the ground.

The strategy here, as with english ivy discussed in another post, is to starve the plant of energy. Plants metabolize constantly, which means they need energy to maintain their tissues. If deprived of leaves over a long enough period, a plant will eventually exhaust its energy reserves.

We'll see what the bamboo tries next.
Posted by Steve Hiltner at Saturday, June 07, 2008