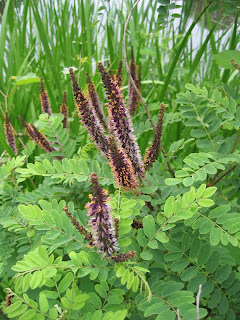 Here's what's bloomin' in early June at Mountain Lakes Preserve and elsewhere in Princeton, shrubwise. On your left are the spires of Indigo Bush (Amorpha fruticosa), which grows along the banks of ponds, mostly, and was getting lots of attention from pollinators when I paid it a visit. I just learned that it is highly invasive in Hungary. But here it mixes well with other natives. 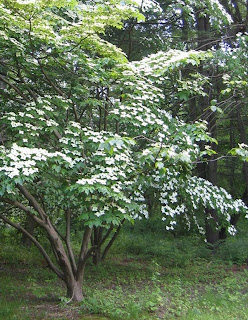 Bike the streets of Princeton and you'll see lots of Korean dogwoods (Cornus kousa) with 4-petaled blooms crowding their branches, sometimes so thick they look like snow. The one in the photo grows in front of Mountain Lakes House. Very pretty, and not invasive that I've noticed. The native flowering dogwood (Cornus florida), which produces excellent berries for fall migrants, blooms a few weeks earlier. 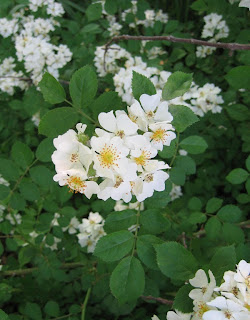 Learn to recognize Multiflora Rose and you'll start seeing it everywhere. It's part of the default landscape in town, sprouting up along fencelines, and does an altogether too good a job of crowding out native species in the local preserves. It was intentionally introduced to the U.S. to make "living" fences on farms, and has gone well beyond its intended role, having escaped to make most of our woods impenetrable. 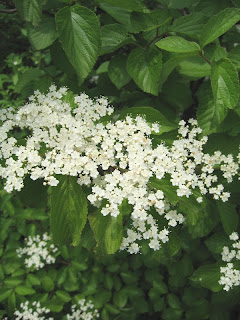 Since this is a Viburnum, I was hopeful it was a native, but it turns out to be Viburnum dilitatum, an ornamental that has invaded local woods. We're starting to remove it from Mountain Lakes Preserve, despite its attractive blooms. Please resist planting it in your yard.

Whatever insects are around don't show much interest in any of these white flowers, for some reason.
Posted by Steve Hiltner at Saturday, June 07, 2008