To Weed a Wetland 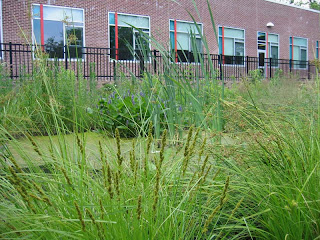 The ecolab at Princeton High School--actually an upscale stormwater detention basin transformed by teachers, students and grounds crew into a wetland--is now in its second season. This photo shows some fox sedges that were part of the initial planting. Behind them is one of the miniponds, with cattails springing up. The dark green leaves and blue flowers at the far side of the pond are pickerelweed, which will bloom throughout the summer. The image in the photo is one of soft, grassy vegetation next to water, beauty and repose. Relax and enjoy it, for the moment, because the next photo is of the same ecolab from another, less flattering angle. 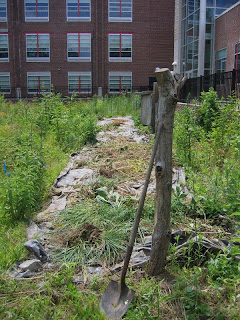 I put this photo in to show how deceptive a pretty picture of a garden can be. Here, the wetland looks more like a war zone, and in some ways it is. The carcasses of weeds lay desiccating on broad strips of black plastic layed down to suppress growth in areas not yet planted with natives.

Though the ecolab is a wetland, it is still a garden, and actions taken this second season will determine whether all the native wildflowers and sedges planted the first year will thrive or be overwhelmed by (mostly exotic) weeds. Will a feel-good project (native plants, wetlands, schoolkids, butterflies, birdhouses) actually live up to its billing, or will it fade beneath a blanket of bindweed, horseweed and a wave of exotic grasses.

With students and teachers mostly dispersed to farflung locales for the summer, the weeds have a perfect opportunity to prosper and turn good intentions into chaos. Most communities don't have a niche for someone with the knowledge and time to care for a planting like this, which is one reason why most of the urban landscape is a boring combination of trees and turf that offers little habitat for wildlife. That's where I come in, with support from the nonprofit Friends of Princeton Open Space and help from a summer intern from Princeton University. We've been augmenting the efforts of teacher Tim Anderson, spending a couple hours a week pulling weeds and adding to the initial planting with native Hibiscus, green bulrush and cutleaf coneflower grown from local seed. 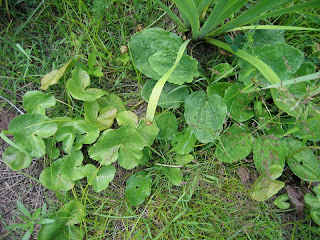 In this photo, you can see the challenge of figuring out what to pull and what to leave. The heart-shaped leaves on the left are of marsh marigold, a native that graced the wetland early this spring with yellow flowers. The oval leaves to the right are plantain, a common exotic weed that, like all the others, we try to pull before its seeds mature. The flat leaves at the top of the photo are blue flag iris, another native.

Interestingly, the plant most people think of as iconic in wetlands--cattail--is one of the biggest threats to the ecolab, as its expansionist tendencies could easily crowd out all the less aggressive natives, reducing the site to a near monoculture.

It sounds intimidating, but the work is made much easier by being strategic--pulling new cattails before they get firmly rooted, pulling exotic weeds when the ground is soft and before they produce seeds. One of the conveniences of a wetland garden is that the soil is very often soft, so that weeds pull easily. Another plus is that the native wildflowers grow with such vigor, making weeding around them all the more rewarding. As this is written, the JoePyes are about to bloom--a good time to pay a visit. The ecolab wetland is on Walnut Street, across from Westminster Conservatory.
Posted by Steve Hiltner at Saturday, June 28, 2008