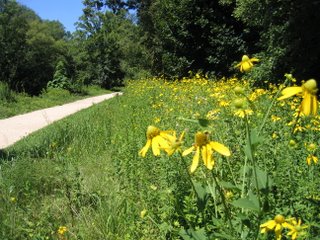 On August 10, at 2pm, we'll meet at Turning Basin Park (on Alexander Rd. where it crosses the canal), to inventory plants along the D&R Canal State Park. Many showy wildflowers, such as cutleaf coneflower and Hibiscus, begin blooming along the canal towpath in early August.

This photo, from the first post on this blog, almost two years ago, shows cutleaf coneflowers blooming along the towpath in mid-August, 2006, near Harrison Street. That was the first year that the D&R Canal State Park reduced mowing of the fields from every two weeks to once a year. Wildflowers that had been getting repeatedly mowed down were finally allowed to grow to full height and bloom.

I haven't been down to the towpath in a month or so, but a similar scene should greet us this Sunday.
Posted by Steve Hiltner at Wednesday, August 06, 2008