A Baby Screech Owl in the Garden

Update, July 28, 2020, 5am: The lovely, trilling call of a screech owl is coming from the same tree from which the baby fell eleven years ago. If screech owls live on average 14 years, the screech owl singing in the predawn could be this baby taken to the Wildlife Center in 2009.
Saturday evening, just before dark, my daughter was amazed to find a baby owl in the garden. I had installed miniponds and native plant habitat in the backyard in part to attract wildlife, but this was totally unexpected. Not knowing what else to do, we put it in a shoe box with some mulch for bedding and brought it inside where it would at least be warm for the night. I did some internet research, and also put a call in to the Mercer County Wildlife Center. Internet sources suggested putting it back in the nest, or at least putting it back where we'd found it and waiting to see if the parent comes to retrieve it. Neither of these seemed practical in the dark. 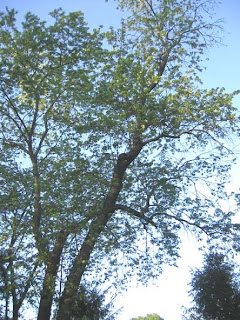 The next morning, a woman named Nicole at the Wildlife Center called back, and recommended taking it in to see if it had gotten injured by the fall.

At this point, I went outside to see where it might have fallen from. Sure enough, the big silver maple in the backyard had a roomy hole about 25 feet up, directly above where my daughter had found the baby. 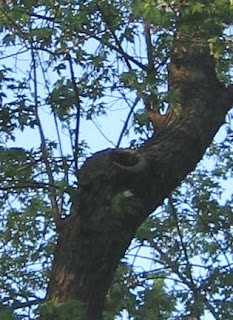 Wishing to confirm that the hole had a nest, I raised a long bamboo pole up and gave the hole a tap. Out sprung an adult owl, surprisingly small, with two tufts of feathers on its head. It perched briefly on a limb before flying off. In its place came a raucous gathering of birds--a catbird, a robin, a bluejay, and some others--all with strong opinions about there being an owl in "my" backyard.

Later in the morning, while at Mountain Lakes Preserve, I ran into the Princeton professor Stephen Pacala, who said it was likely a screech owl. While he was at it, being an international authority on climate change, he answered a few of my lingering questions about that issue.

Later in the day, hopefully not having taken too much of our sweet time about it, we delivered the baby owl to the Wildlife Center, down along the Delaware River, not far from Lambertville. Nicole, reporting that the owl was cold and had a minor injury below its wing, immediately put it in an incubator. They would feed it "pinkies", which are baby mice, and if it survived and grew it would be put with an adult screech owl--essentially a foster parent from which it could learn how to call and how to eat. They would then release it in Princeton when it was strong enough to survive in the urban wilds.

Though my daughters had given it names--Owlie and Bobo--the Wildlife Center gave it a new designation, Case #2009-327 . We are welcome to call and ask how it's doing.

Www.owlpages.com says that screech owls like riparian woods along streams and wetlands .... and woodlands near marshes, meadows, and fields. A tree overlooking a series of backyard miniponds must have made the screech owl pair feel right at home.