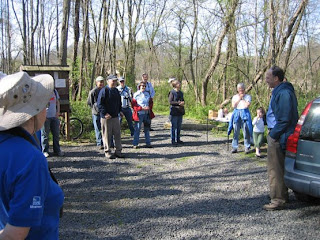 The new and newish bird observation platforms were dedicated last weekend. Fred Spar, on the right, is president of the Friends of Rogers Refuge (FORR) and gave a short speech thanking all those responsible for helping sustain the refuge. Tom Southerland, further back and to the left, told of the three Toms who were involved with saving the marsh back in the 60s and starting the Friends organization. Tom Poole, Winnie Spar, Laurie Larson, representatives of the American Water Company and Princeton Township--many who have worked to save and restore this jewel and birding mecca were on hand. 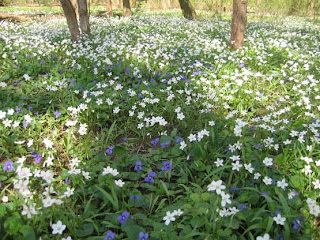 Afterwards, we took a walk around the perimeter of the refuge. Here's a shot of violets mixing with spring beauties. The scene is so "clean" because periodic floods clear the forest floor of debris from the previous year, creating an effect that rivals any meticulously cared for garden. 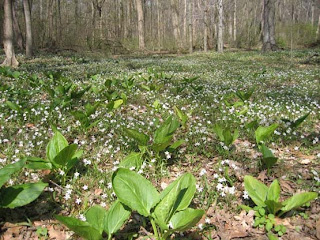 Skunk cabbage and spring beauty made another fine combination. The oak leaves on the ground show that this area didn't flood over the winter. 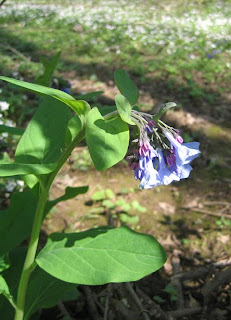 A solitary Virginia Bluebell was a very pleasing find. Though some of its stems had been browsed, presumably by deer, it was still able to flower. Without the township's program to bring the local deer population into ecological balance, flowers like this wouldn't have a chance. Nature's garden isn't complete without some sculpture, in this case rendered by a local beaver.