How To Recycle a Snapping Turtle 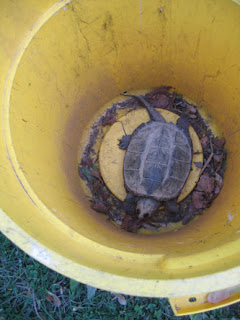 Will they take this curbside? Saturday, a few hours before the baby owl plopped down into our garden from above, our dog was heard barking persistently near the neighbor's fence. I thought it must be someone's cat or dog that had roused Leo to such passion, but no. The snapping turtle that had been showing up in our minipond periodically over the last couple years (see April 22 post) had apparently decided to move on up the valley and got stymied by the fence.

We decided to help it on its way, and so coaxed it into a recycling bin. Mr. Turtle headed first to the science teacher at Little Brook, who promised to release it the next day into a local waterway after a day's service in show and tell. 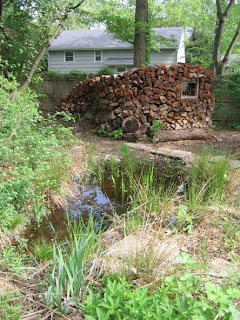 This here's turtle country! The view is downstream, where once a tributary of Harry's Brook flowed, before it got buried beneath houses. The largish snapping turtle had been making do with a pond that could get as small as three feet across and two feet deep in a summer drought.