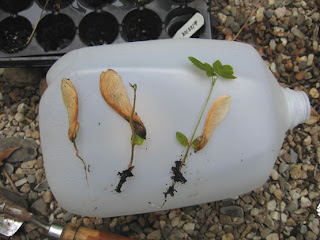 These seeds were trying to sprout in a planting tray. Maples manufacture an elegant device for propagating themselves--a so-called "samara" that is part seed, part wing. The wings catch the air in such a way as to rotate like a helicopter, slowing their fall and allowing the wind to carry them some distance away from the parent tree.

The photo shows three stages, progressing from left to right. The seed sends out a root, then its first leaves--cotyledons--expand and turn green, then it forms its first pair of "true leaves", which have the classic maple leaf shape.