Cicada Killers Living Peacefully Among Us 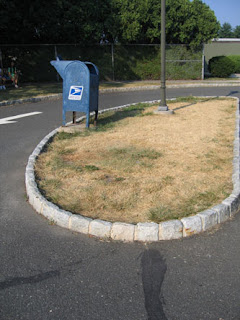 For at least the past two years, an unassuming island at the township parking lot has been the home of cicada killers. It sounds like a fearsome creature, and its looks and size are not reassuring. But the male wasps that now buzz around low to the ground cannot sting, and the females are very reluctant to. 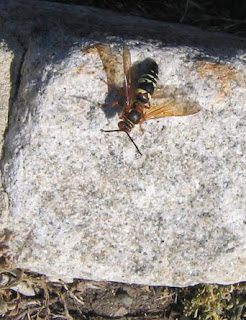 In the morning, at least, the males take time out from chasing each other to alight on vegetation or on a curbstone for a few moments, their abdomens pulsing. 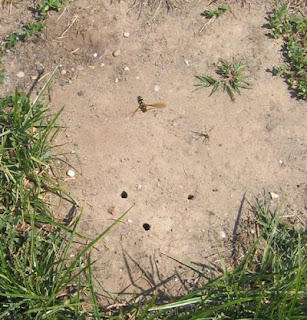 They overwinter as larvae in underground burrows. After emerging as adults, they survive on nectar from flowers. The females, which are somewhat larger than the males, will spend the summer snatching cicadas from the air. They paralyze them with their sting, then drag them back to underground burrows, where the cicadas serve as food for raising the next generation of cicada killers. 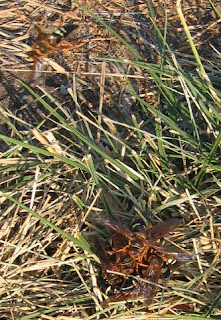 NOTE: July 5th, I noticed a cluster of wasps on the ground (lower right corner of photo). Information I found on the web describes this sort of clustering to be several males who clutch a mating pair.

A few days later, I noticed that cones and warning tape had been erected on the island, apparently as a way to keep people away. Hopefully, the wasps will be allowed to continue living there, since they show no inclination to bother people walking by.

NOTE: Today, July 9, I learned that the wasps had been treated, due to complaints. It was an unfortunate combination of the two parking lot islands being in an area of high foot traffic, and the wasps' breeding success. Their numbers grew from a few last year to dozens this year.

NOTE: As of July 20, cicadas are singing and the cicada killers are back to their buzzing around at the Community Park parking lot, despite any treatment two weeks ago. They reportedly hatch progressively through the summer, so any treatment's effect would be temporary. The sparse grass and full sun on the parking lot islands is perfect for them, and they don't seem to be doing any harm.