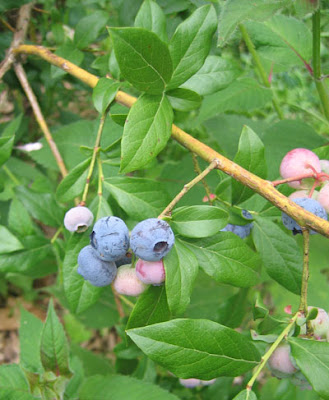 For some fifteen years now, in two yards in two states, I have grown blueberries without any expectation of edible results. Many years, I didn't even bother to check. It was simply assumed that the catbirds and their surrogates, exercising due diligence, would deprive us of any harvest.

So it took a few moments to digest the meaning of those congregations of blue that caught my eye while passing by.

Some hours later, it occurred to me that my visits to the backyard this spring have not been accompanied by the accustomed complaints of a catbird that in past years had frequented the bushes along the back fence. Those bushes, overgrown, had been given a radical pruning this spring. It's a tenuous cause and effect, to be further contemplated while munching on the fruits of nearly forgotten labors.
Posted by Steve Hiltner at Thursday, June 17, 2010