Heavy rains in late August can cause major mischief in Princeton, with many people gone on vacation and a lot of basements left unwatched. This is a good time to recall someone who's out of town, and consider contacting them to ask if their basement is prone to flooding. Typically, the worst flooding happens during the last of a series of downpours, after the ground has already become saturated from previous rains.

For my part, as the last downpour was easing up at dusk, I headed out across flooded streets to the high school ecolab wetland, where past overwhelmings of the stormdrains had caused water on Walnut Street to flow under the back doorway into the performing arts center, ruining the stage floor. Since that fiasco, the school has sandbagged the doorway during heavy rains. But in late August, it's quite possible that the staff who know about the sandbagging procedure are on vacation. 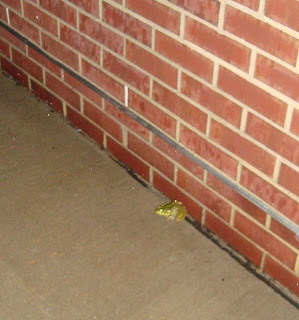 The first evidence of heavy flooding was a green frog playing the role of refugee from its own wetland, 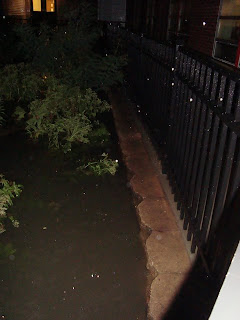 which was filled to the brim with water from nearby roofs, parking lots and streets. It's supposed to fill up like that; the design flaw is in the overflow, which sends extra water not out into the street but instead towards the school. The hallway of the performing arts center looked a little wet. I slogged home, called the borough police and asked them to have someone at the school check for flooding indoors.

Of course, it would be nice if product recalls could include flood-prone buildings and basements. Simply send them all back to the original builders for a redesigned version.
Posted by Steve Hiltner at Sunday, August 21, 2011