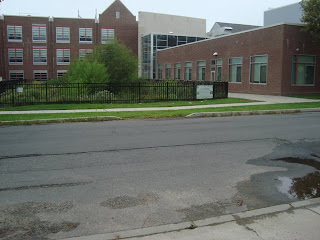 Yesterday, with Hurricane Irene headed our way, I stopped by the Princeton High School to check on preparations for the coming deluge. This part of the school had stormwater seep under the doors a week ago, and was most emphatically flooded two years prior when Hurricane Bill paid a visit. I've heard from several sources that the bill for Hurricane Bill included a new stage floor for the high school's performing arts center, which had become warped by flooding damage. Even if insurance paid for the replacement, one has to wonder if the district school's insurance rates took a jump afterwards.

Here's how the flooding happens: The retention basin in the photo (a.k.a. "ecolab", which we have planted with native wetland species), is surrounded on three sides by the high school and receives runoff from the high school roofs and also from nearby parking lots. The basin in turn drains into the system of stormwater pipes underneath Walnut Street. If it rains long enough and hard enough, however, the street's underground stormdrain system becomes filled to the brim, water has nowhere to go, and the basin overflows. At that point, pipes no longer matter and surface flow dictates where floodwater goes. Since water flows downhill, the only way to get rid of the water is for it to flow out to Walnut Street and safely away from the building. Unfortunately, Walnut Street is higher than the high school doorway thresholds. In these heavy rains, Walnut Street floods and becomes a river, and stormwater actually flows towards the high school rather than away. 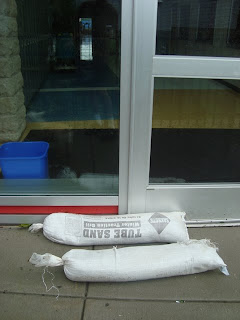 The highschool has responded to this by placing sandbags in front of all the doorways during heavy rains. These help, but when I stopped by at 1am this morning, after Irene's fury had begun to ease, the music room and hallway into the performing arts center showed signs of having again been flooded. (These photos were taken this morning, after stormwater had receded.) 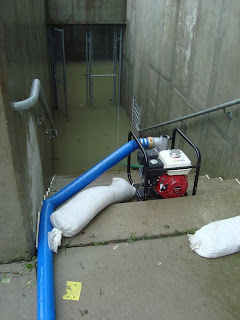 Exasperated school staff were trying to pump water out of the school. The custodians had just finished prepping all the floors for the return of students, and now they would have to do it all over again. The cafeteria had flooded, and it looked like utility rooms in the basement were now under water. 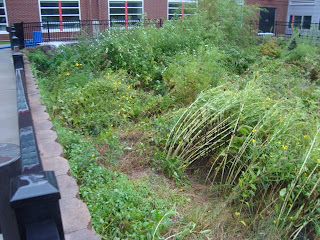 One staff member tried to blame the vegetation in the retention basin, but all around him was evidence that the vegetation had played no role in the flooding whatsoever. 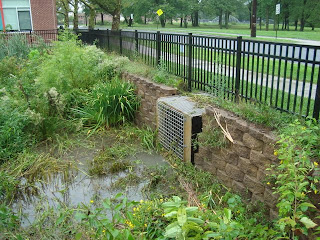 The drain, photographed this morning, showed no signs of blockage, which is no surprise given that, when the street storm drains become overwhelmed, the water reverses flow and heads in to the retention basin from the street, rather than out. 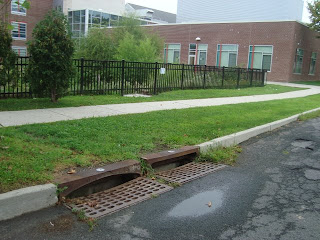 At 1am this morning, this whole area was a lake. 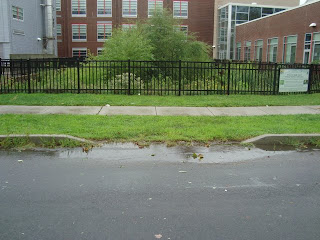 A curb cut meant to carry surface water away from the retention basin was instead carrying water towards it. 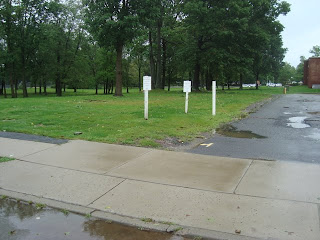 The only solution I see is to lower the curb on the other side of Walnut Street so that the mighty Walnut Street River can flow into the field owned by Westminster Conservatory. 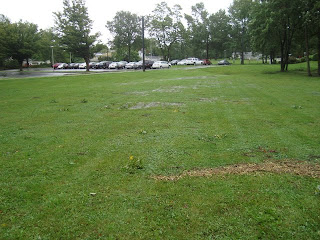 This, in fact, is what some water was doing last night, but to an insufficient extent. 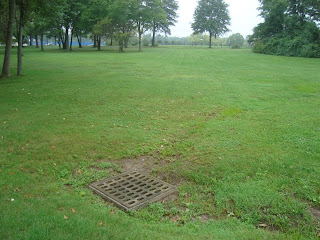 A pond formed in this field last night, next to the Westminster parking lot. Last year, the field was declared by Westminster's own consultants to be a wetland that could not be developed. Since the conservatory uses the highschool performing arts center for some of its performances, utilizing this field more effectively to prevent flooding of the high school seems to be a solution that would benefit all involved. 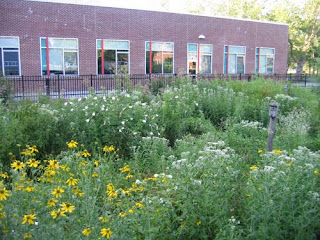 What needs to be made clear to decision-makers is that the native plantings in the retention basin have no impact on flooding, lest this ecologically vibrant and educational planting become the victim of an invasion of red herring.