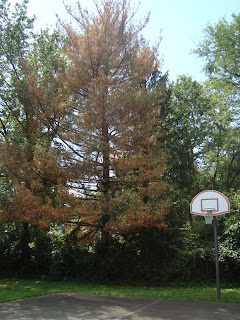 The latest white pine fatality in the neighborhood is at the edge of my backyard and Potts Park. Across the street from my house is a dead spruce. The township arborist believes that the drought last summer, plus another drought this year in late June and July, may have stressed some of the local white pines and spruces beyond their limits.

Another arborist tells me that the herbicide Imprelis, mentioned in a previous post as a possible culprit, would only affect the more manicured areas where herbicides are more likely to be used. Spruce and white pine have been dying in many unmanicured areas, and he sees climate shift as a likely cause. White pines and spruce were introduced to Princeton from their more natural range to the north, suggesting they'd be the first to show stress from increasing heat and drought.

Though all urban trees eventually have to be removed, typically at a cost of $1000 or more, one can speculate that the weather extremes associated with climate change are making those costs come due earlier than they would otherwise. 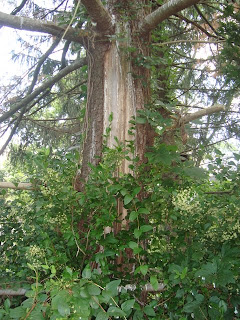 This particular tree had a scar that surely didn't help.
Posted by Steve Hiltner at Thursday, August 25, 2011