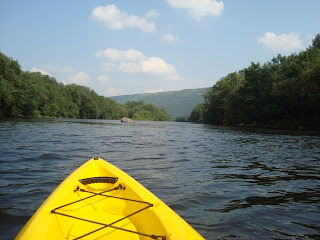 Say you love to whitewater canoe, and want your kids to experience the same joys of running rapids that you remember from childhood. But you live in New Jersey. Chances are, your internet research will lead you beyond the Delaware River to the Poconos, which turn out to be in Pennsylvania. As it happened, they were right on the way to a family gathering we were having at ancestral grounds further west.

Rentable canoes for whitewater apparently no longer exist, but Blue Mountain Sports offers a ten mile do-it-yourself kayak trip through some easier rapids on the Lehigh River, starting at the town of Jim Thorpe.

The rapids were a perfect introduction for my daughter, who quickly figured out how to follow the current and steer clear of the rocks. 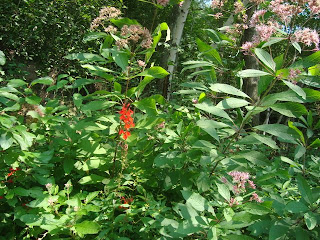 Meanwhile, Dad was getting distracted by the native plant diversity flourishing along river's edge. Conducting plant inventories while negotiating rapids may prove to be the next new fad in extreme botany. Cardinal flower (red) and JoePyeWeed (pink) grew thick along the shore, mixed with a host of other familiar native species that sometimes made me feel like I was kayaking through my backyard.

One surprise was the streamside stands of big bluestem, a tall native grass more typical of midwestern prairies. It's also called turkey foot, for the 3-pronged seedheads it sticks up into the air like an upside down turkey. (Other species seen as the current pulled us along: river birch, red maple, alder, spiraea, buttonbush, deciduous holly, buckthorn (hopefully the native Rhamnus lanceolata), meadow rue, fringed loosestrife, cutleaf coneflower, and what looked like a native hosta.) 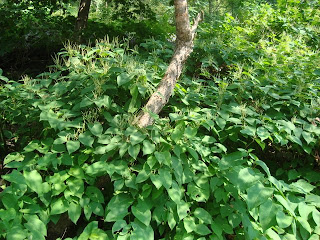 Causing some worry were a few sightings of Japanese knotweed, an exotic species that can replace native diversity with a monoculture over time. 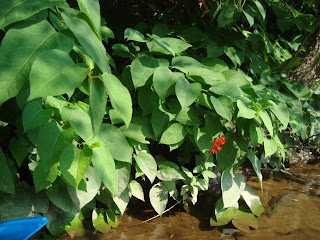 Here, a cardinal flower is trying to hold on at the edge of an expanding Japanese knotweed clone. A several-acre field of solid J. knotweed seen on the way in to Jim Thorpe foretells what could happen to this beautiful river corridor if no preemptive action is taken to nip knotweed's invasion in the bud. 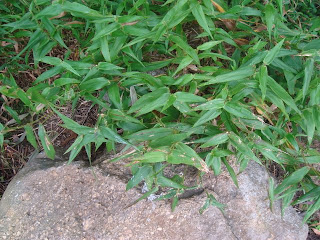 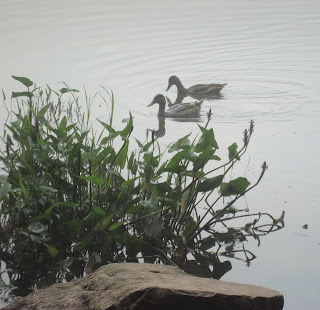 Pickerelweed blooms all summer long just out from the shoreline, thriving in the stable water regime of the park's impoundment. 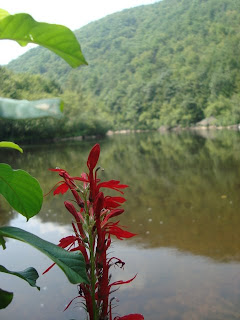 The next day, after making a note to research better pads for sleeping in a tent, it was back to the Lehigh River for a hike up a narrow valley to the Glen Onoko Falls. 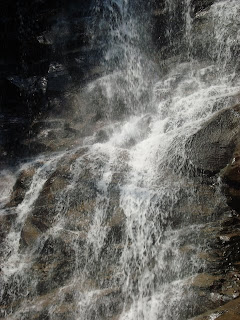 The trail is unmaintained, and described as steep and dangerous. On a dry day, and exercising some care, the hike was easily doable. We had almost as much fun going up as the water clearly was having cascading down the hillside. 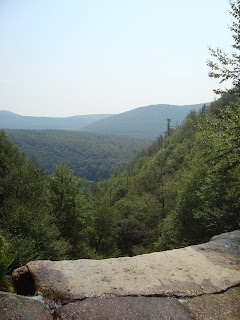 For a picnic at the top, the view provides the main sustenance.