The Vine That Ate an Observatory 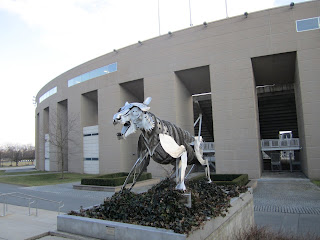 Down at the Princeton football stadium, apex predators seek to intimidate all who dare challenge the orange and black. When I first moved to Princeton, these felines had ivy growing in their torsos. The combination of teeth and foliage was probably intended to send a message of Ivy League fierceness, but the effect was a bit odd. Now, with ivy relegated to the ground, they look more lean and mean.

In the field next to the stadium, geese graze peacefully, 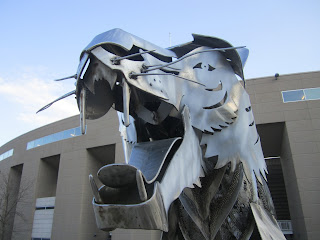 unfazed by the local dentition.

Visions of migrations long past dance in their heads as they feast on the turf. Surely their distant ancestors once filled the sky like constellations on a thousand mile journey. Now they puddle jump from field to field around town.

I heard once that the origin of the non-migratory geese was a government farm in New Jersey where they were raised to supply hunters with targets. Then, when the farm closed, the geese were released, having lost the habit of long-distance migration. This explanation, having long hidden out in the pre-google part of my brain, has in the process of being written down just now caught the attention of newer, post-google brain cells that immediately called for a search to check its validity. Turns out that at least part of the story may be true. According to a post by someone with Connecticut Audubon, a non-migratory subspecies was discovered in Missouri in 1962. Government breeding programs helped increase the population to better insure its survival, and then spread them all over the country. That last part may be where good intentions went wrong. 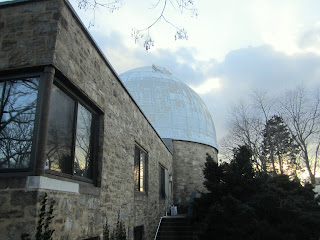 Just down from the grazing geese, next to the parking lot for Jadwin Gym, stands another entity whose range has become limited. Because of light pollution, most any observatory hereabouts cannot journey very deep into the universe. 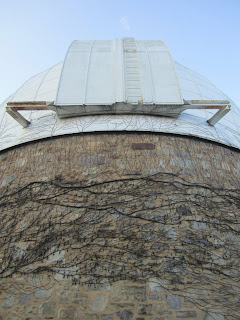 This one, the FitzRandolph Observatory, has by default gained a new purpose as substrate for what appear to be Virginia creeper vines, 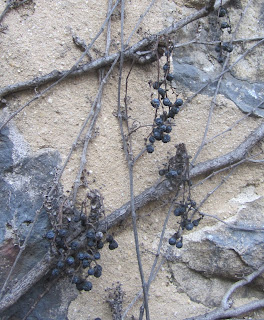 whose stems and berries ornament the walls.

Judging from growth patterns, the dome hasn't been rotated in at least a year. The monthly observing nights the astronomy department holds for the public are now conducted elsewhere on campus. 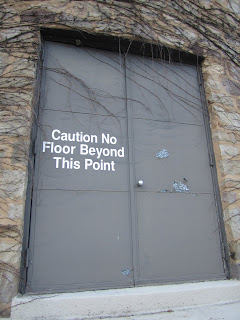 Hopefully, the writing on the door is not a metaphor for the building's future, or our own for that matter, given what we're doing to our lonely oasis in a harsh, unforgiving universe.

A website offers a link to the Friends of FitzRandolph Observatory, which leads to a blank page. Either the future hasn't been written yet, or the writing is on the wall.

By coincidence, Princeton Future had a meeting this morning about repurposing various buildings in town, though university buildings weren't included. Another building, county-owned, that sits quietly growing vines is the Veblen House. It at least has a few of us friends trying to give it a new life.
Posted by Steve Hiltner at Saturday, March 17, 2012

Email ThisBlogThis!Share to TwitterShare to FacebookShare to Pinterest
Labels: Places To Visit, Wildlife