Repairing the Towpath and Nature Along the D-R Canal 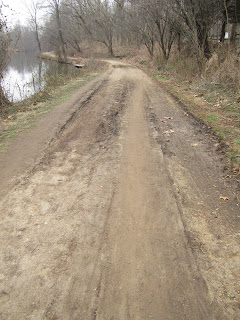 For years, the towpath was a given, a high quality crushed-stone pedestrian and bicycle thoroughfare stretching more miles than most anyone has time to explore, up and down the DR Canal. That changed last August as the unprecedented flooding of Hurricane Irene--tearful after having been downgraded to a tropical storm--deposited a thick layer of silt over the trail. The gift of fertility, reminiscent of the ancient Nile, would have been more welcome if the valley's investment was in agriculture rather than transport. 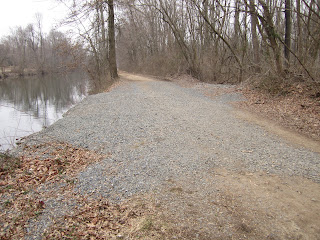 I inquired last fall and was surprised to hear that there were no funds available for repair, and if and when they become available, the northern portion's washouts, up towards New Brunswick, would get the first attention. Some repair in the Princeton area, by the water authority rather than state parks, has taken place. The photo shows a patch job just up from Turning Basin Park.

I called Stephanie Fox at DR Canal State Park today, and was told that more extensive repairs are waiting on FEMA money from the federal government. In addition to trail damage, some of the park's historic buildings were also damaged in the flood. Though the crushed stone surface is still intact in most places underneath the mud, repair will involve bringing in additional stone. Cost for repairing just one mile of minimally damaged trail could run $10,000, so overall cost will likely be very high. 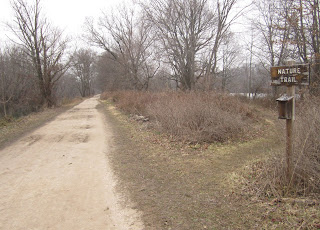 Near Harrison Street, where the nature trail branches off, the towpath is in relatively good shape, at least when it is dry. The trail loop was built by parks personnel after I "discovered" the meadow there where the land between Carnegie Lake and the towpath broadens out. At the time, the park crews were mowing the meadow weekly during the summer. When I pointed out that they were mowing not grass but a field of beautiful native wildflowers, they agreed to limit mowing to once a year in late winter. Everyone was a winner with this arrangement: less work, more habitat, more flowers. 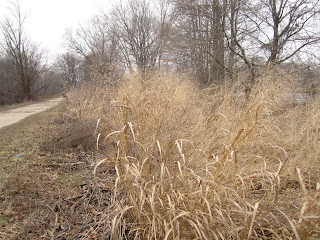 In winter, at the trailhead, the switchgrass leaves are an attractive legacy of last year's growth. 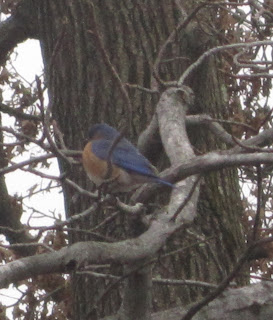 Word is that the bluebirds have hung around all winter, it being so mild. 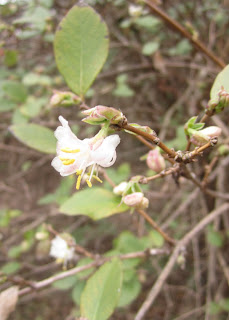 One reward of exploring the nature trail this time of year is an encounter with fragrant honeysuckle (Lonicera fragrantissima), whose small white flowers live up to their name. This is the one exotic bush honeysuckle species that I've never seen spreading into wild areas. A line of the shrubs remains from maybe 40 years ago when that ribbon of land between the canal and Carnegie Lake was carefully tended as part of the grand entryway into the university.


Each year, with no assistance other than annual mowing, the meadows have become richer with wildflowers like joe-pye-weed, ironweed, tall meadowrue and cutleaf coneflower. It seemed time to relax, sit back and enjoy the fruits of less labor. 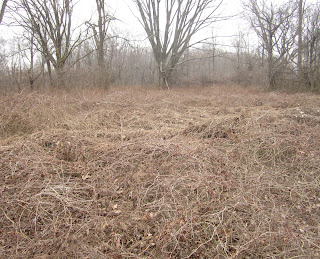 But a trained eye will see in this very plain-looking photo a web of vines. Porcelainberry, a grape-like exotic vine that has covered forest edges at Princeton Battlefield with stifling kudzu-like curtains of growth, has been spreading down the canal corridor. A light infestation noticed a few years ago is now exploding, threatening to permanently overwhelm the wildflower meadows.

Park crews are busy elsewhere along the canal, dealing with invasive Japanese knotweed and hops. We'll have to see if there's anything that can be done this year. 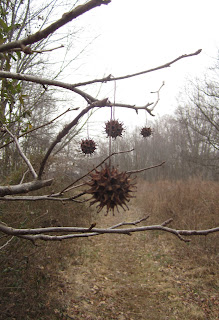 In the meantime, there are sweetgum balls serving as natural tree ornaments next to the trail, 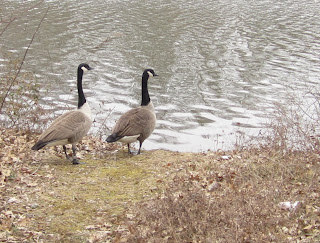 the resident geese, and, if one can negotiate with the geese for access to the shore, 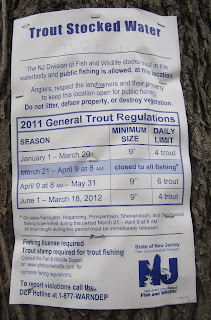 trout to be caught.
Posted by Steve Hiltner at Tuesday, March 06, 2012