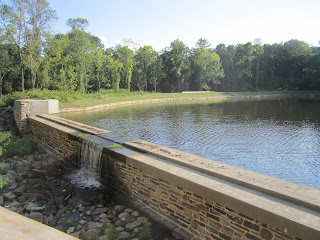 (Also posted at PrincetonPrimer.org)Quite a story will be told this Thursday, Nov. 15, 7pm, at the Princeton Library community room, about the reservoirs that once provided Princeton with ice in pre-refrigeration days. Engineers identified the need for restoration of the dams as far back as the 1970s, but only when an anonymous donor came forward with several million dollars (eventually totaling 3.5) was the project able to move forward, in 2010. (The donor had also helped to purchase Mountain Lakes back in the 1980s.)

Here's a description of Thursday's event:

"Created as an ice pond in 1884, Mountain Lake gradually filled in with sediment and the severe deterioration of its dams threatened to drain it altogether. Princeton Township engineering staff and consultants review Mountain Lake's ice harvesting history, archaeological discoveries, and the careful rehabilitation over the last two years that has restored the beauty of this National Register site and has preserved it for future generations."

The Mountain Lakes Preserve is one of Princeton's best-kept open secrets. Despite being in the middle of Princeton geographically, Mountain Lakes feels tucked away, accessed down a long driveway at 57 Mountain Ave, not far from town hall, across 206 from the Community Park fields. 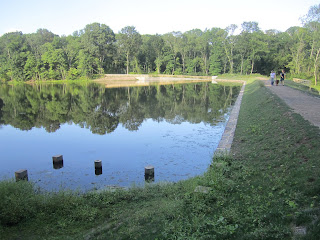 You can access a pictorial and descriptive history of the restoration project at this link (scroll to the bottom and work your way up chronologically), but I'll show a few photos here.

The small wooden posts in the foreground of the above photo show where a ramp once conveyed big blocks of ice out of the lake and up into barns that once stood three stories high just below the dam. The barns, insulated with straw, could store ice for up to two years. The ice, of course, was delivered to people's homes to cool their ice boxes, in those more sustainable days before refrigeration became widespread in the 1930s or so. 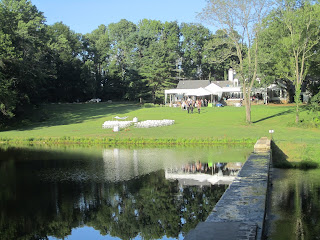 Mountain Lakes House, built around 1950 and now used for weddings and other events, has a beautiful view of the upper lake and dam. 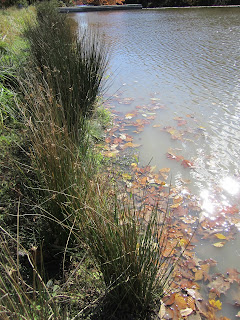 Dredging of the thick sediment (The 1600 truck loads were taken to a sod farm) during restoration apparently uncovered a rich seedbank of native wetland rushes, sedges and wildflowers that carpeted the lakebeds while the lakes remained drained. Friends of Princeton Open Space board member Tim Patrick-Miller led efforts to rescue some of these plants prior to refilling the lakes. They now make a fine native border along the upper lake. 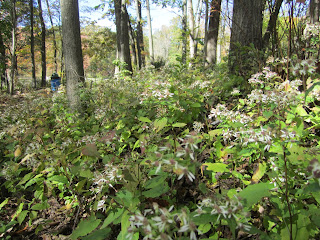 Native woodland asters flourish along a lakeside trail in an area we cleared of invasive shrubs. All trails are open to the public. 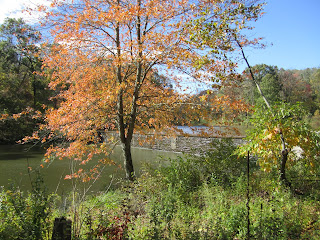 This area too, just below the upper dam, is being managed for native species.

Though the restoration was primarily the work of Princeton township engineers, consultants and the very capable contractor who did the elaborate stonework (done primarily by a man named Wolfgang) and concrete reinforcement needed to restore the original beauty while bringing the dams up to current standards, I was able to contribute to the project in various ways. 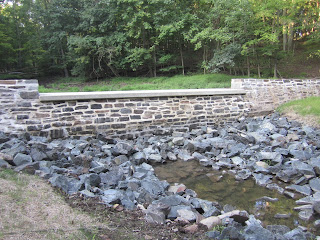 As resource manager for Friends of Princeton Open Space, I helped correct some misperceptions about the lakes' original depth, made sure that areas near the dams with rare native plants remained undisturbed, and also pointed out the importance of restoring not only the two main dams, but also the smaller dams just upstream that had served to capture stream sediment before it could reach the two lakes. 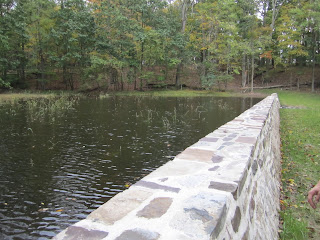 Restoration of one of these upstream dams, built in 1950, was made possible by additional funds from the anonymous donor. Now cleaned of seven feet of sediment accumulated in its first 60 years, it should substantially increase the life of the two main lakes.

I also encouraged the township to dig several vernal pools nearby to serve the local frog population. State regulations may have bogged down those plans.

If you haven't been to Mountain Lakes, take a walk out there some day to see the award-winning dam restorations, an occasional great blue heron, "Devil's Cave" at the top of the boulder-strewn slopes of Witherspoon Woods, and maybe even hear the call of a pileated woodpecker. It's one of the finer meetings of nature and culture, wild and tamed, natural and man-made beauty.
Posted by Stephen Hiltner at Tuesday, November 13, 2012