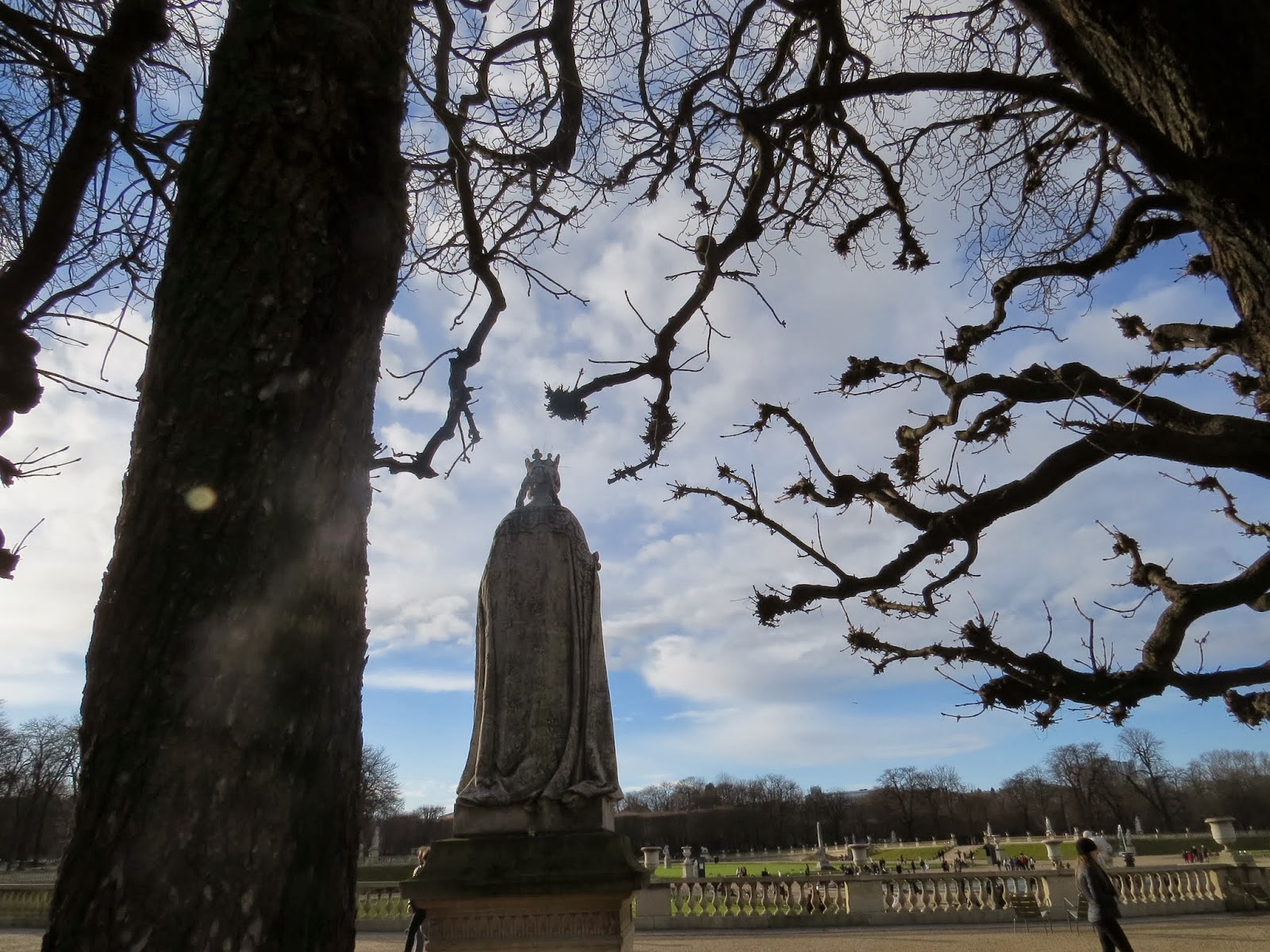 Periodic visits to Europe offer exposure to an approach to trimming trees that would be anathema in the U.S. In Paris's Luxembourg Gardens, for example, these trees look like they're shaking their fists at the local statuary. 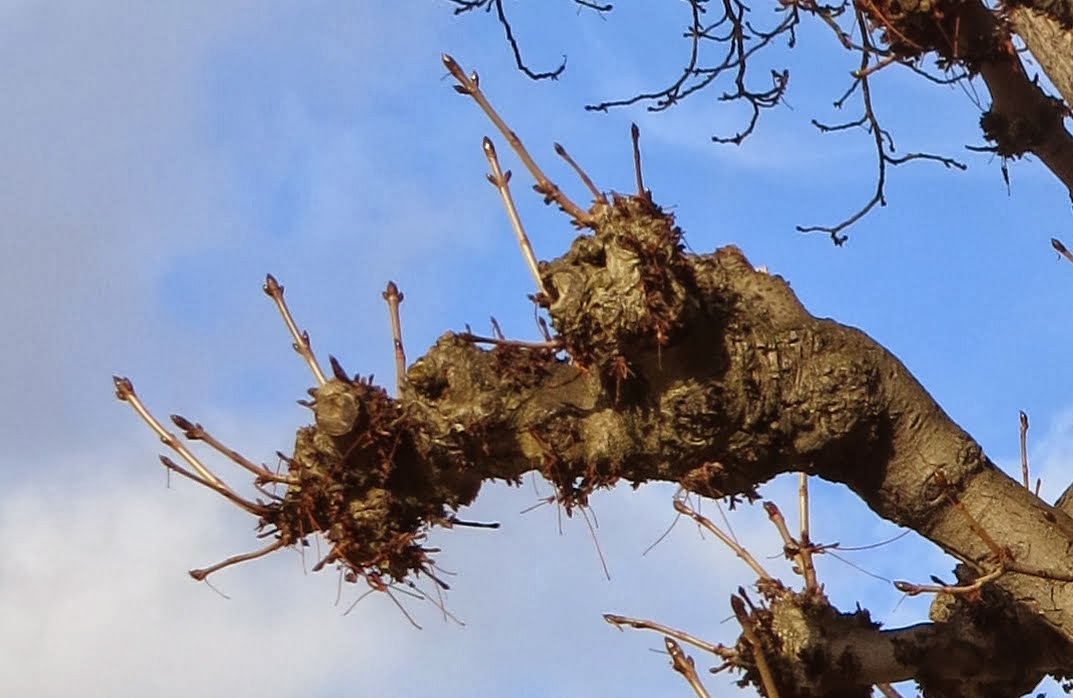 That clenched fist look is the result of an annual pruning back of branches so that they remain the same size year after year. Though bringing to mind the foot binding that was prevalent in China until a century ago, the severe pruning is part practical, part cultural. In this particular case, the statuary, I'm sure, appreciates not being engulfed in the foliage of ambitious tree limbs. 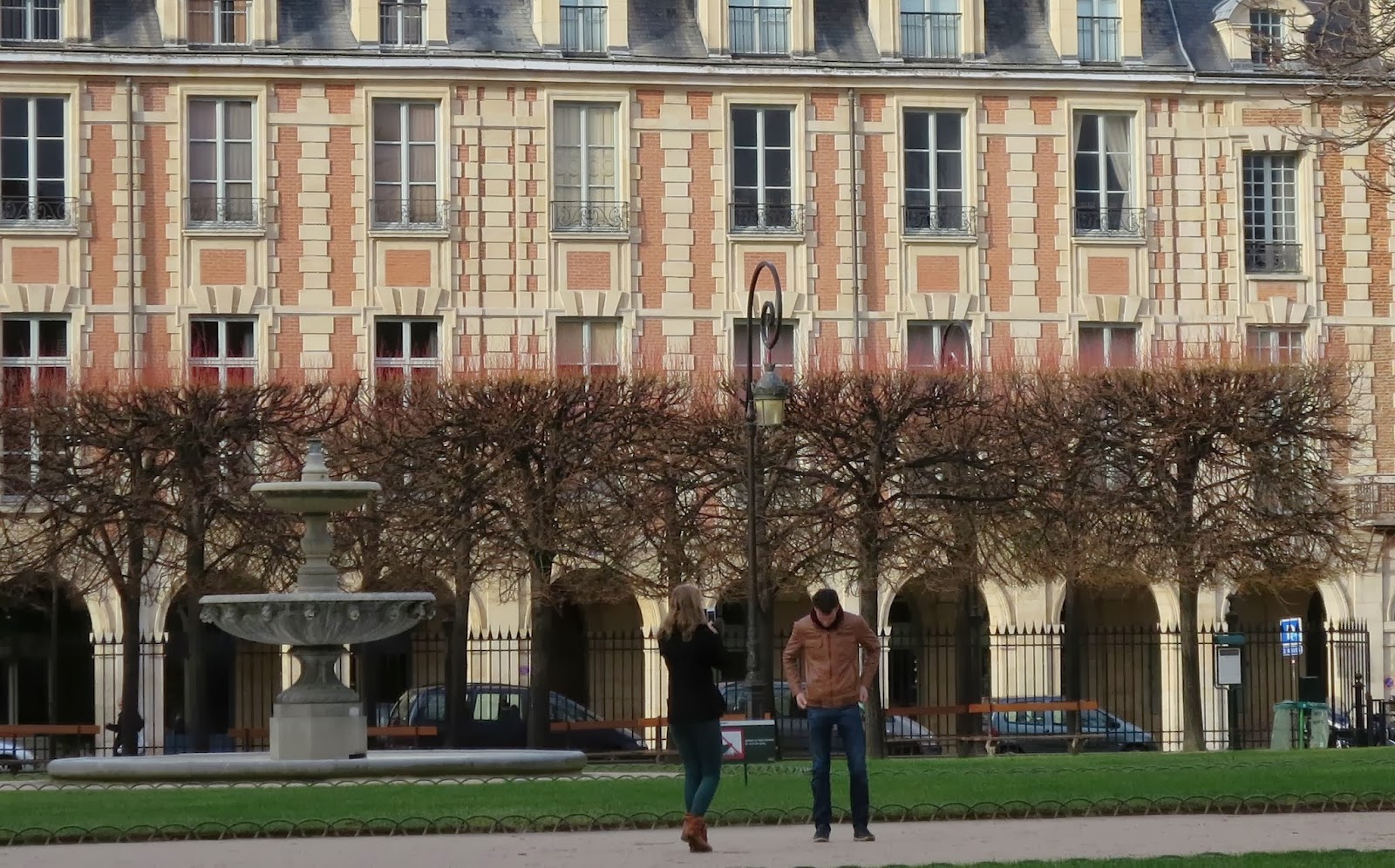 In some parks, such as Place de Vosges, where Victor Hugo lived, the trees are squared off in the shape of cubes, the better to imitate the surrounding architecture and preserve views of the glorious buildings. 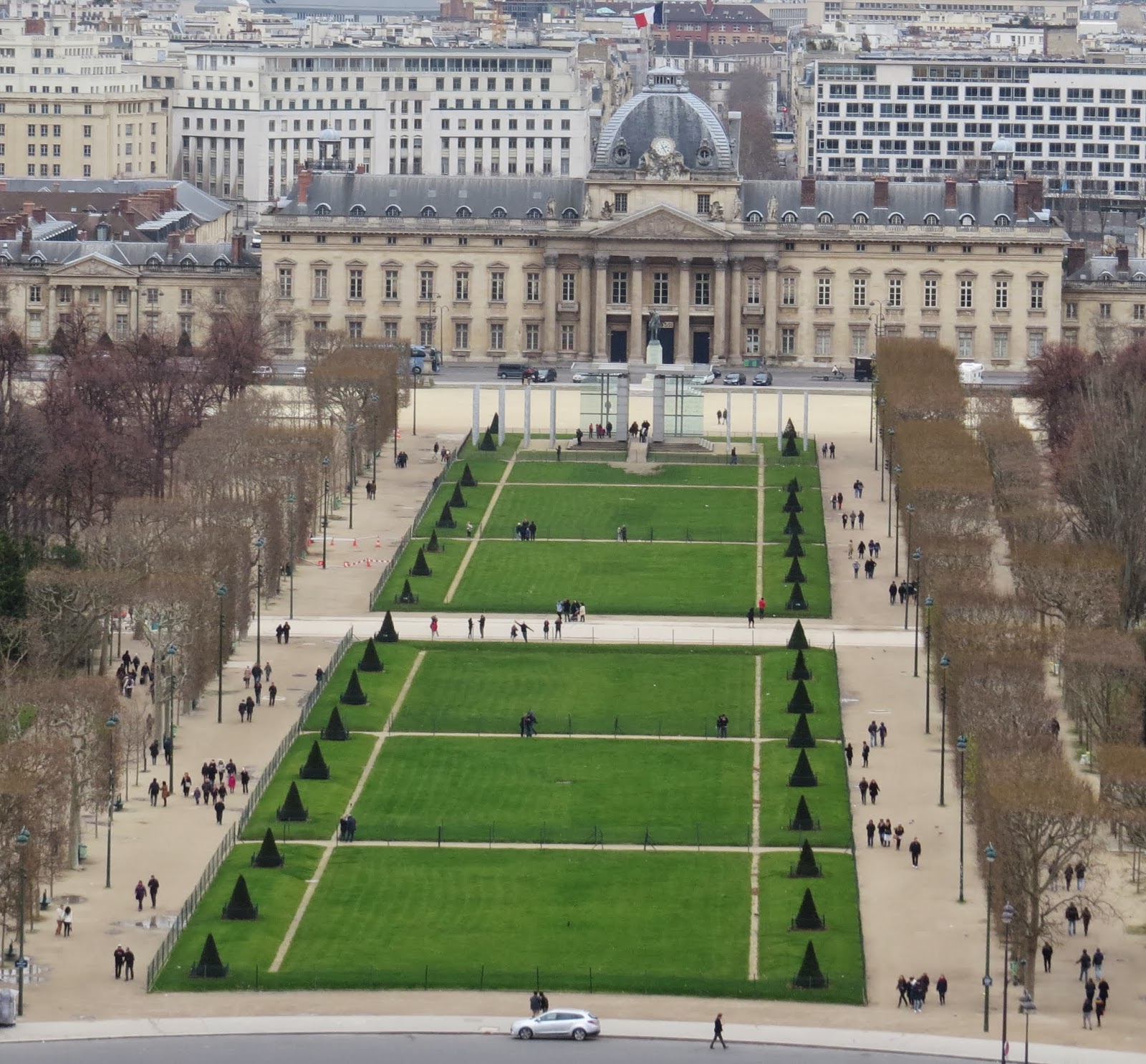 The flattop haircut for trees, which looks like it was achieved with the blades of a helicopter flying upside down, takes on a militaristic tone in the park leading to the French Military School. If soldiers can be made to march in rows, it's only fitting I suppose to subject the local foliage to the same discipline. 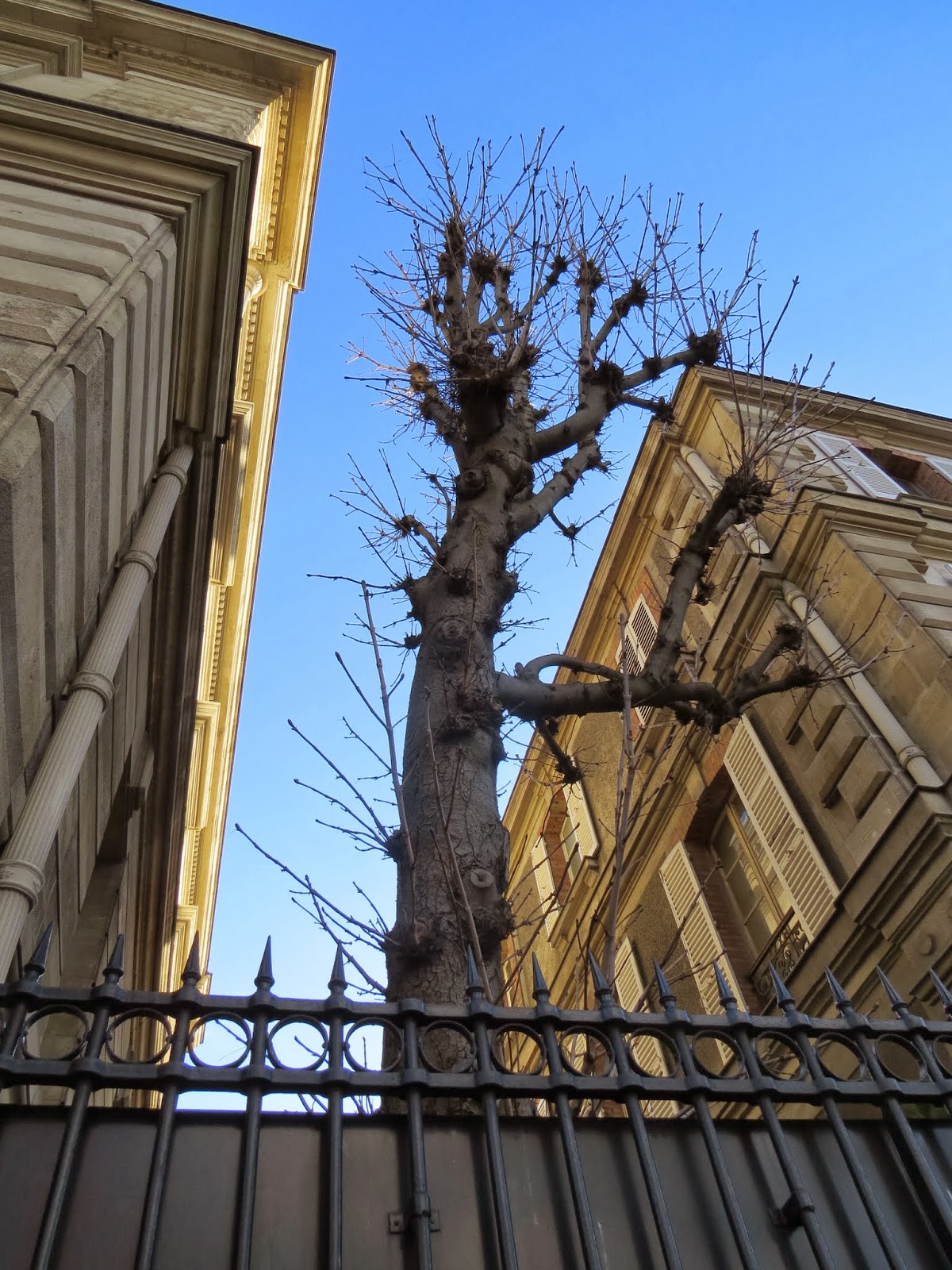 Along narrow streets and in tight squeezes between buildings, this pruning technique loses its formal and militaristic overtones and becomes merely a practical solution to an otherwise unsolvable dilemma. There is no other way a tree of this size could be sustained in such a constricted space. 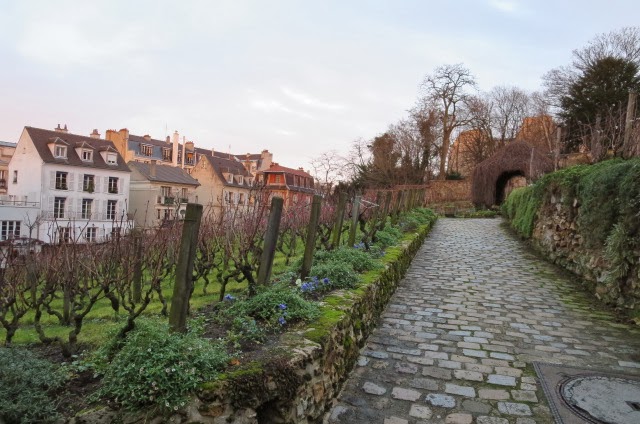 My pet theory is that the control of tree growth originated in the vineyards, where grape vines need to be radically cut back each year to get maximum yield. This photo is of the last remaining vineyard in Paris, on the side of Montmartre. 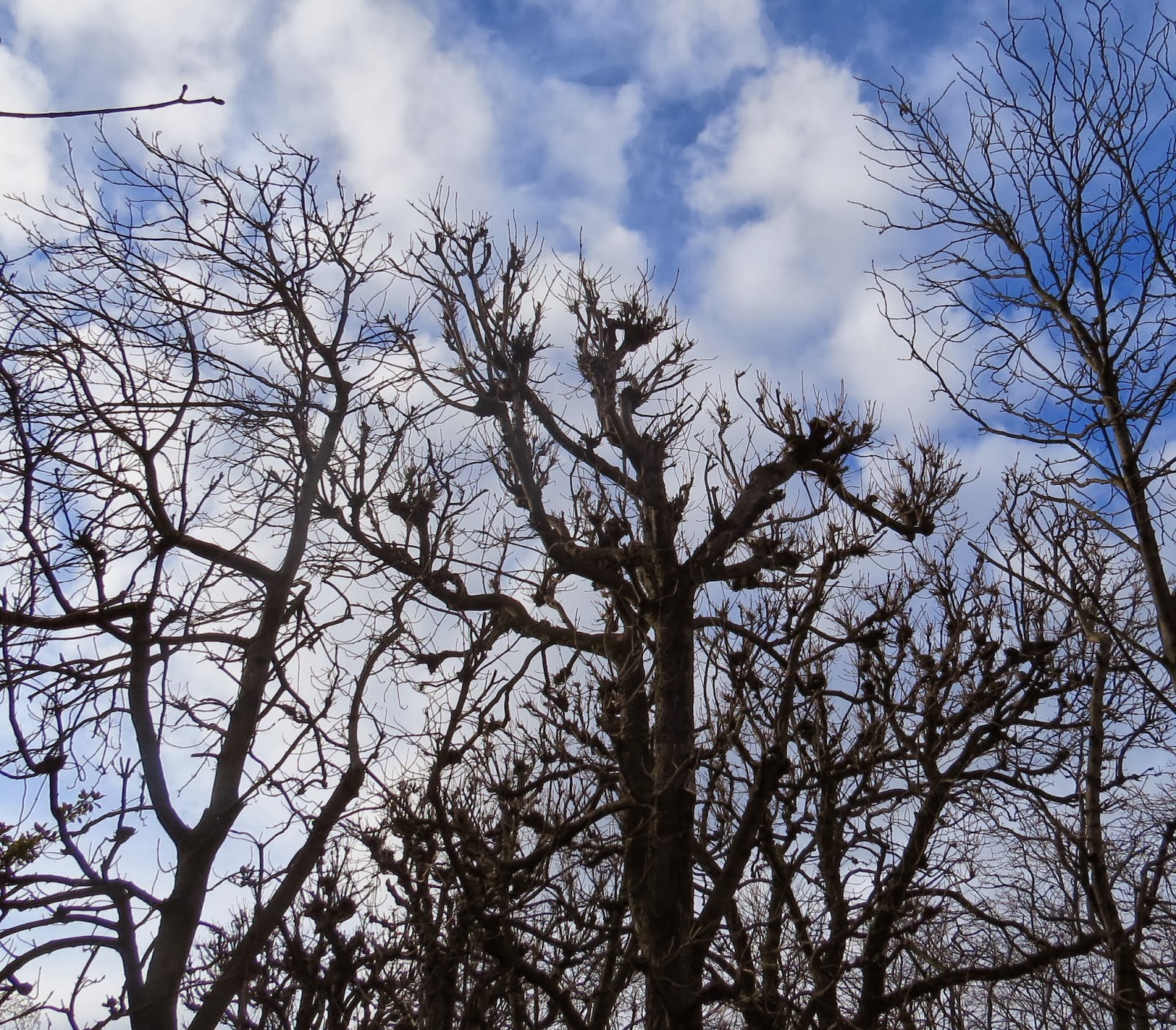 All gradations of this form of disciplined growth can be found in Paris. Even in the highly formalized Luxembourg Gardens, the pruned and the unpruned intermingle.

There's an exploration of the history of French gardens on the Mt. Holyoke college website. In the 17th Century:


"The theory of the French garden was the formal subordination of nature to reason and order with a simultaneous romantic awareness of nature's freedom. Water was the perfect metaphor for this practice. Architects could alter the flow of water and could manipulate it in the form of fountains and pools, however, water always maintained a certain level of freedom with the light and images it reflected." 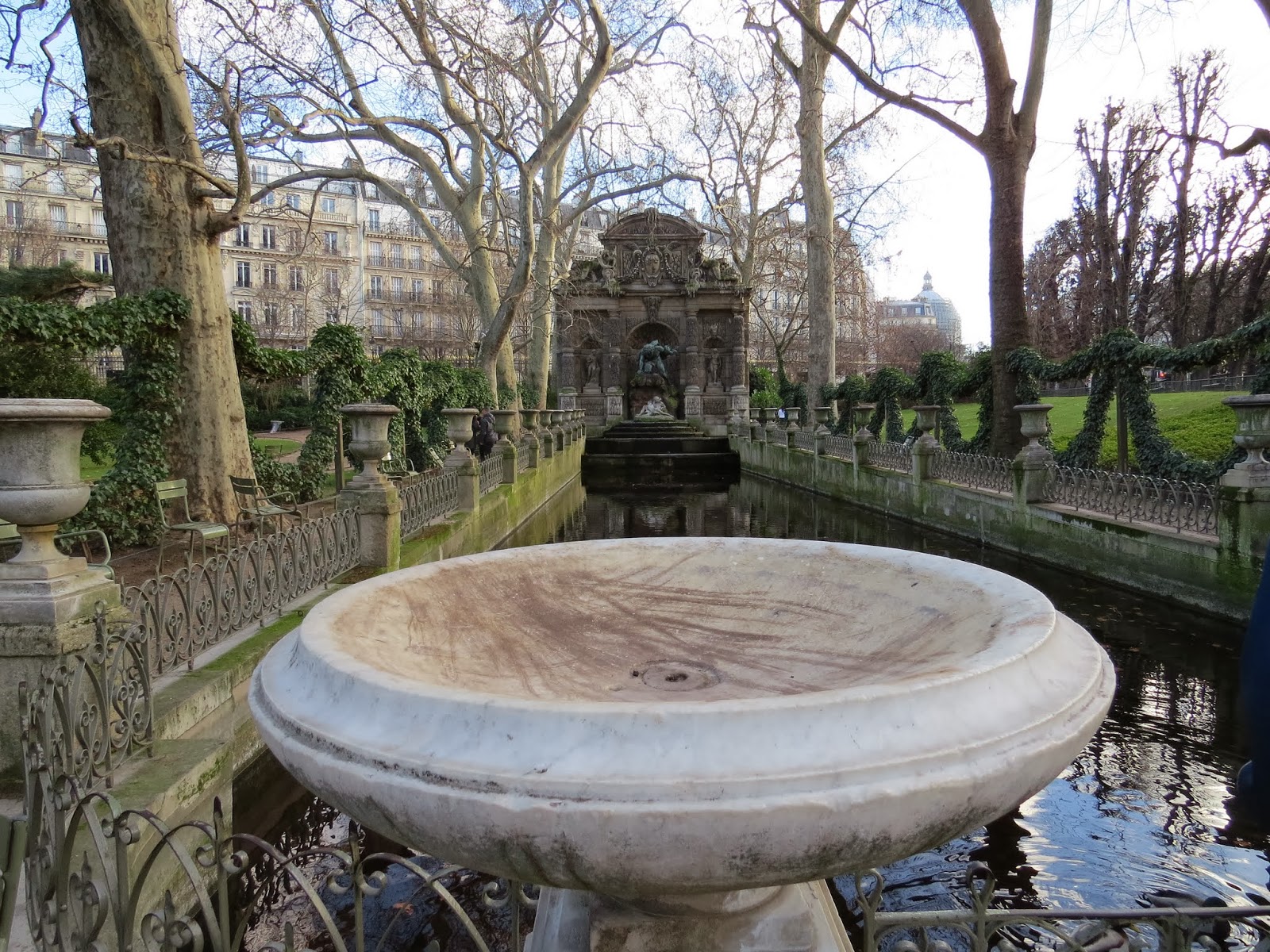 That's a useful context for appreciating the reflections in the Medici fountain. The London Plane trees on either side are allowed to grow unfettered.

Rousseau helped spur some changes in the 18th Century,:

"The overall appeal of the French garden to the bourgeoisie was the goal of a Rousseau-inspired escape to nature, while one remained in Paris. In Nicholas Green's article he quotes Jules Simon as having reminisced on how "in certain corners of the Luxembourg garden you could almost believe yourself in the countryside. There was nothing more delicious, after a wearying day, than to find yourself hidden among these great trees, to forget Paris in the center of Paris, to smell the invigorating scents of earth and vegetation." 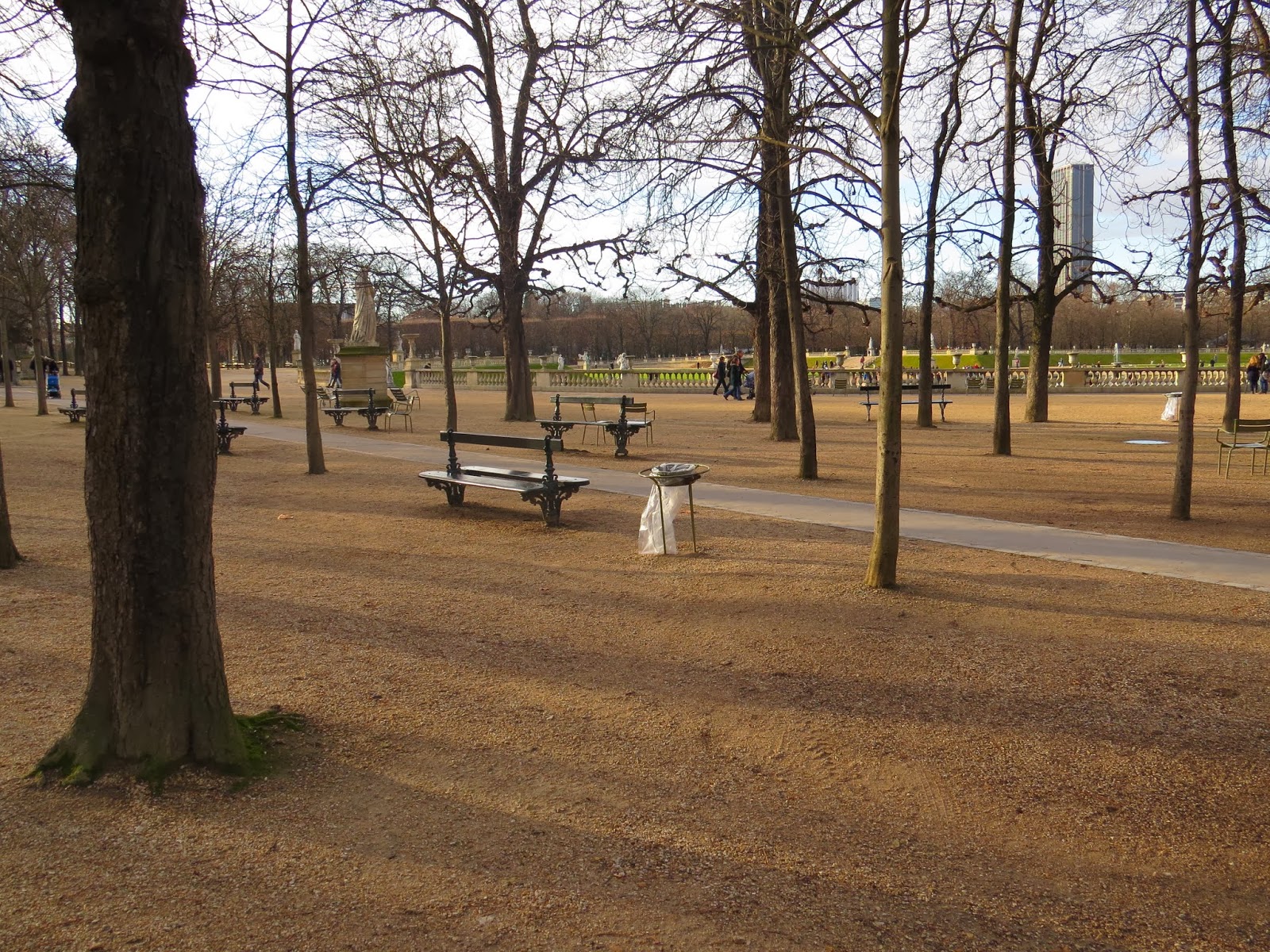 With what looks to be a bare earth policy, they save a lot on lawnmowing, or on tending the sheep that have begun to replace lawnmowers elsewhere in Paris. 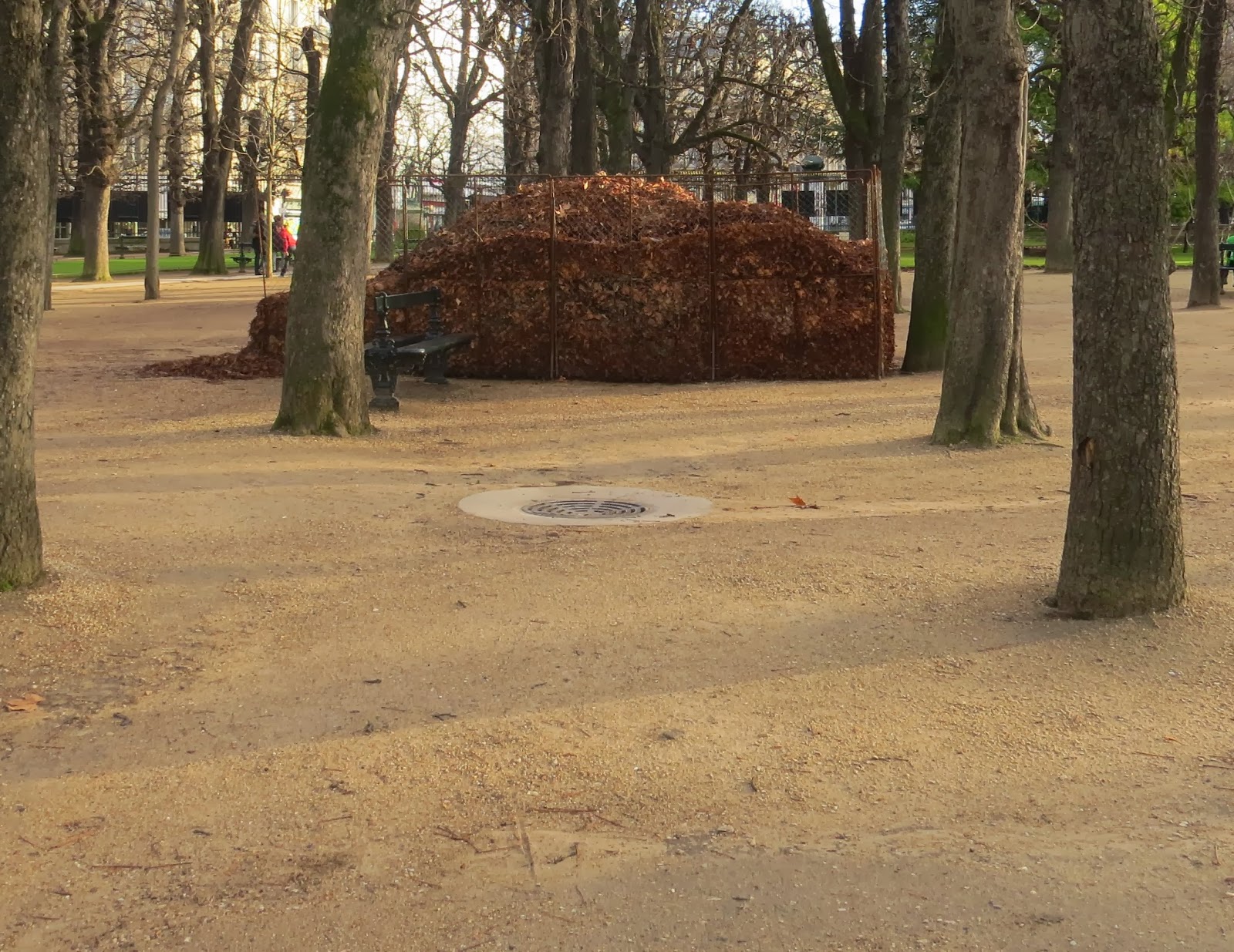 Nice to see that the French have no qualms about composting their leaves on-site. 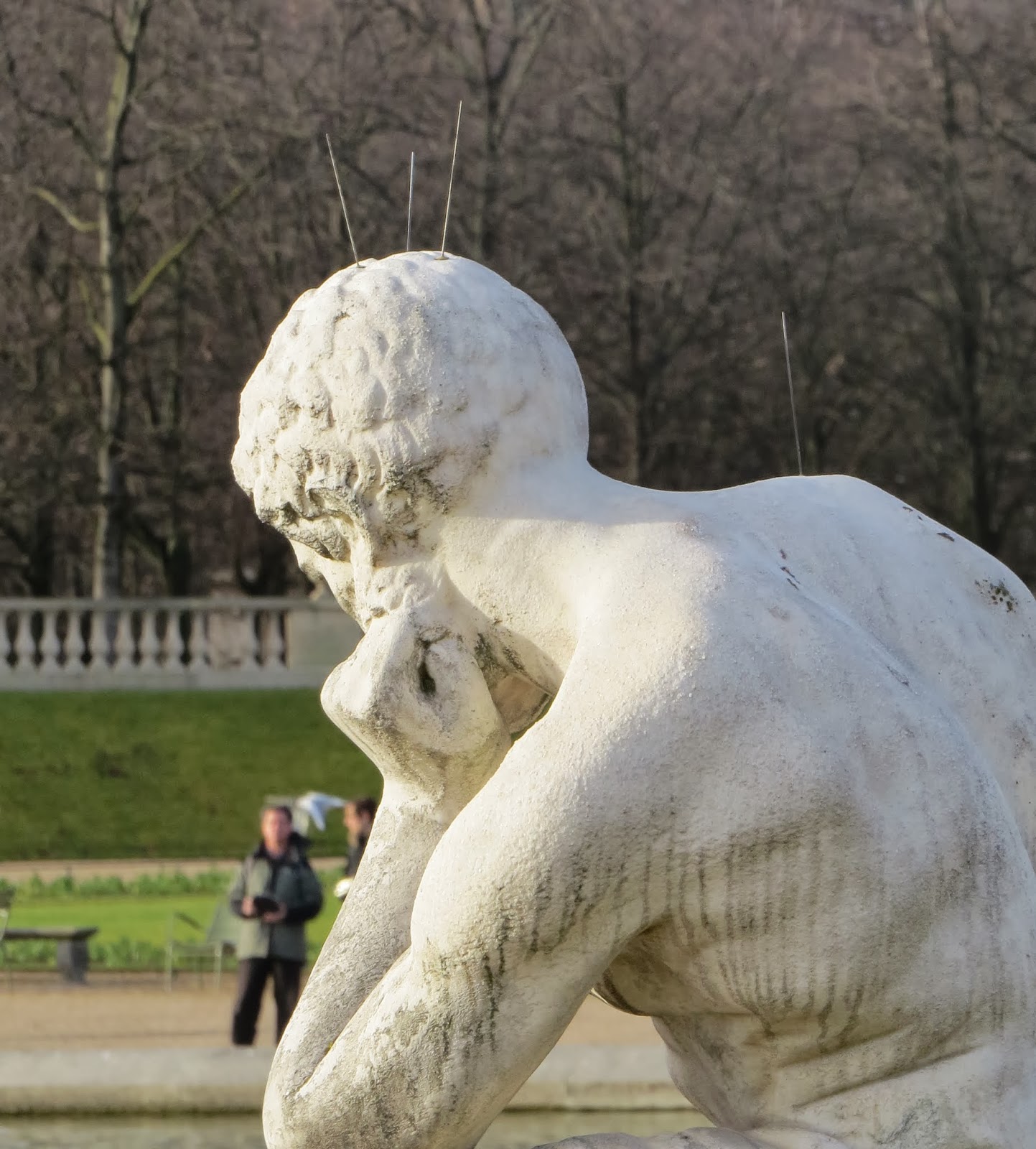 Like the heavily pruned trees, the heads of the statuary also have little shoots. 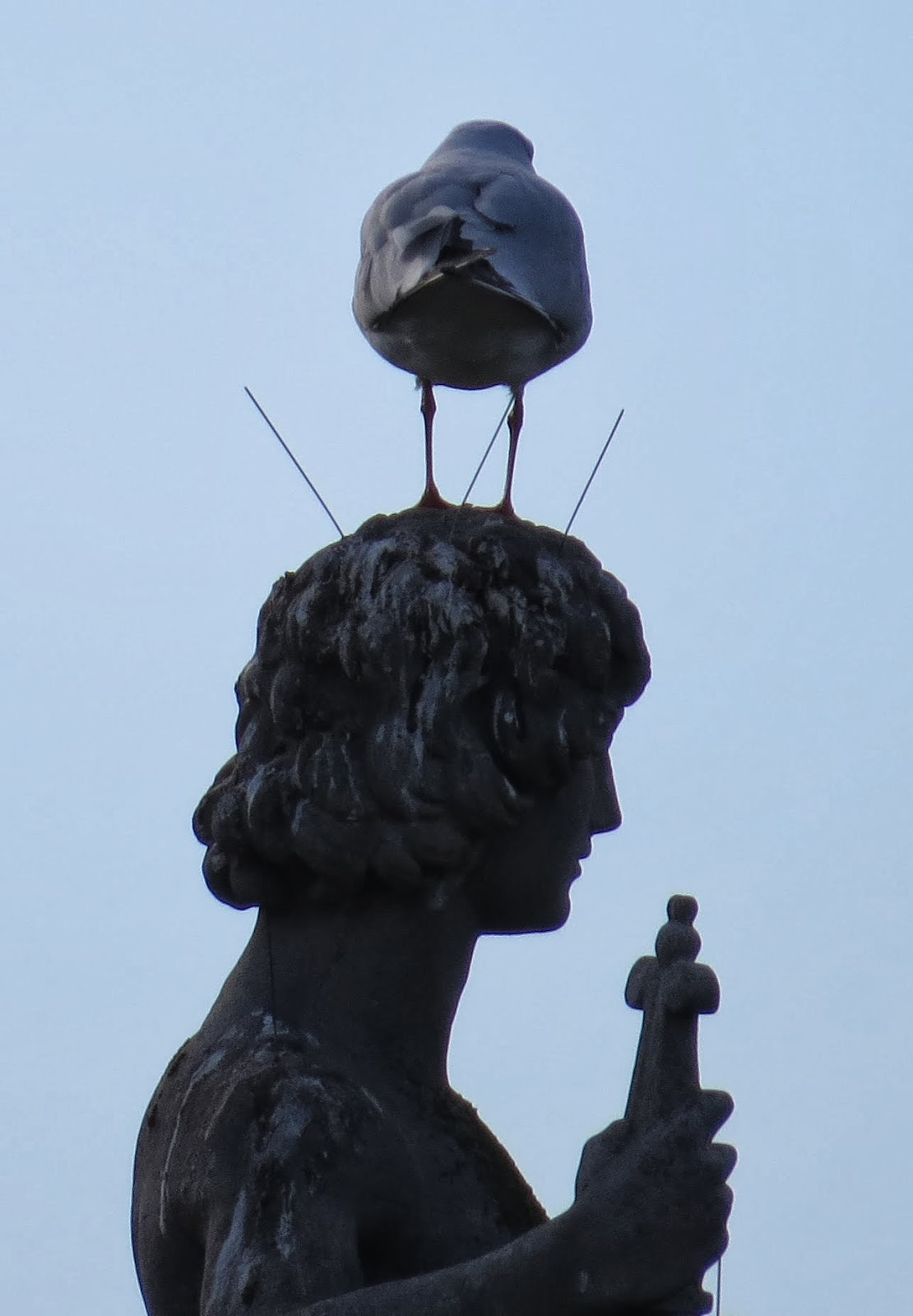 Obviously, the local wildlife have not gotten the message the spiky hairdoos are meant to send. It would be interesting to study whether Paris pigeons have evolved longer legs, to cope with the spiky statues--the hypothesis being that long-legged pigeons able to land on prime perches have higher survival rates and/or are somehow more attractive to prospective mates, and thereby spread the long-legged gene through the population over time. Looks like another visit to Paris is needed, to expand the frontiers of knowledge.
Posted by Steve Hiltner at Wednesday, January 08, 2014